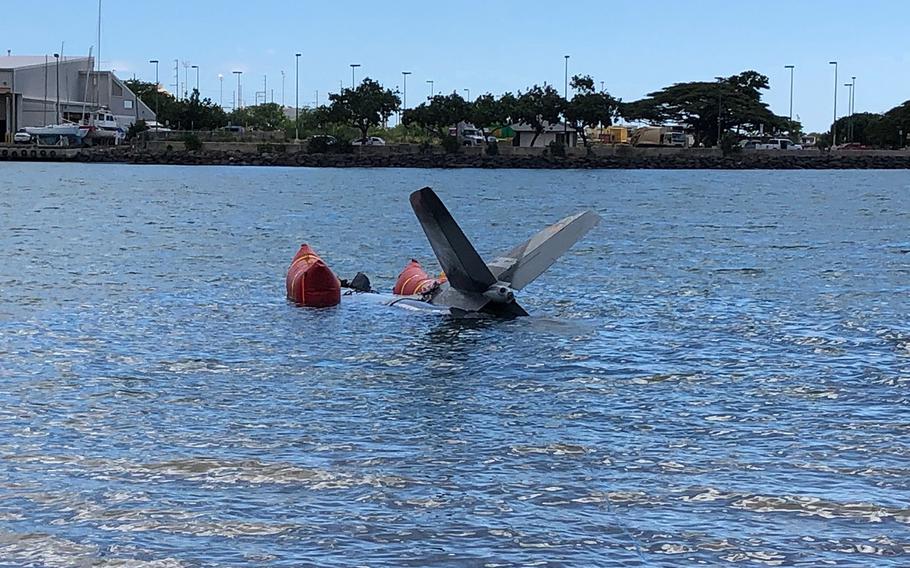 The tail section of a privately owned Hunter Hawker aircraft is salvaged in the waters off Honolulu, Jan. 8, 2019. The Coast Guard coordinated with the state of Hawaii and private parties to conduct the operation following the Dec. 12 crash. (Courtesy of U.S. Coast Guard)

FORT SHAFTER, Hawaii — Salvagers on Tuesday recovered a section of fuselage from a fighter jet that crashed off the Honolulu coast in December during a training exercise.

The civilian contractor flying the privately owned jet was injured during ejection. He was hospitalized and released.

The wreckage was found in early January under 260 feet of water using an underwater drone, the Coast Guard said in a statement.

“Using a blend of local salvage assets, remote engineering guidance, and advanced sensing technology sourced from the mainland, the locally based salvage company Parker Marine Corporation has completed the next stage of the aircraft salvage,” Coast Guard Chief Warrant Officer Russ Strathern, a marine safety specialist, and response officer at Sector Honolulu, said in the statement.

“The main section of the fuselage containing residual oil and potentially hazardous substances has been salvaged and transported to a staging location for the ongoing National Transportation Safety Board led investigation,” he added.

Using the drone, the salvage company “lassoed” the tail of the aircraft wreckage with a cable and slowly raised it to the surface, the Coast Guard said.

The section of wreckage was then towed to a haul-out point approved by the state Department of Land and Natural Resources Division of Boating and Ocean Recreation.

It was then trucked to Marine Corps Base Hawaii, where the NTSB is investigating the cause of the crash.