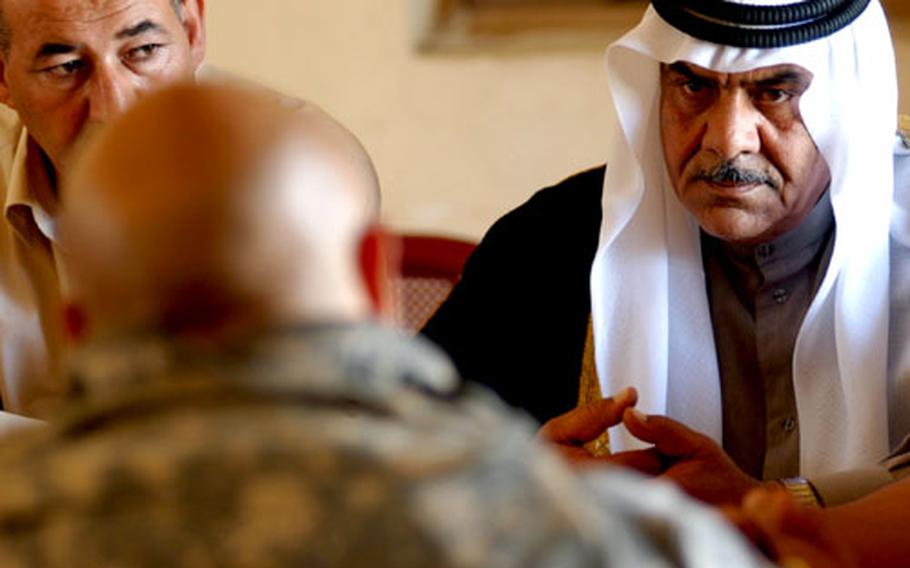 A sheik from the city of Salman Pak, right, listens Sunday during a meeting with Capt. William Arnold. (Ben Murray / S&S)

A sheik from the city of Salman Pak, right, listens Sunday during a meeting with Capt. William Arnold. (Ben Murray / S&S) 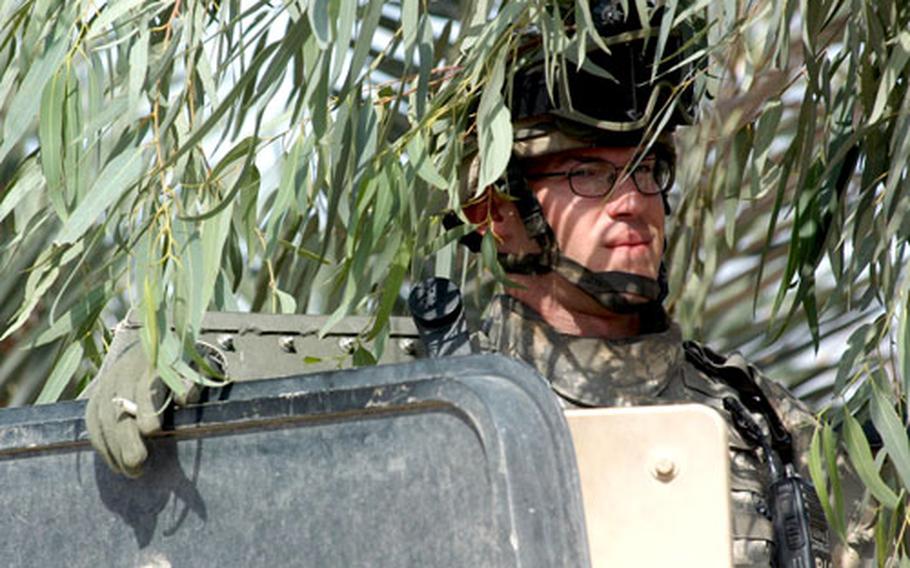 Spc. Jeffery Irvin peers out from the willow branches used to shade his Humvee outside a police station Saturday in Salman Pak, just south of Baghdad. A gunner with Company B, 1st Battalion, 61st Cavalry, 506th Regimental Combat Team based at Camp Rustamiyah in Baghdad, he was pulling security while the bosses attended a meeting. (Ben Murray / S&S)

SALMAN PAK, Iraq &#8212; For weeks, members of the Salman Pak city council were too intimidated to come to weekly meetings.

Death squads from both Shiite and Sunni groups lurked in the city just south of Baghdad, where police were rumored to be infested with militia members, and the threat of kidnapping and murder kept the council from openly convening.

On Saturday the council, along with a group of local sheiks, met for the first time at a local police station.

The topics of discussion were broad but passionately discussed. Sheiks in the group asked Arnold what could be done to install a Sunni mayor in Salman Pak, and his headquarters moved back into the city. It had been relocated because of security concerns, Arnold said.

The sheiks&#8217; request revealed hints about the older days of Salman Pak and the Sunnis&#8217; influence within it. Before the war, it was a resort town for Saddam Hussein&#8217;s top brass that included high-priced real estate on the banks of the Tigris.

The city is still heavily Sunni within town boundaries, Arnold said, but the voting population of the region now that now elects the mayor is overwhelmingly Shiite.

Arnold told the assembly that U.S. forces would only be present to ensure that fair elections take place.

Also up for discussion Saturday was the presence of the new police force within the city. Some members said the force was intimidating locals and should be moved to the outskirts of Salman Pak &#8212; though soldiers said the new force has done much to quell sectarian violence in town.

Though no votes or council action were taken, Arnold emerged from the meeting mainly glad that it had taken place at all.

With just nine days left in their deployment, the unit had been hoping to leave their replacements with a functioning city government.