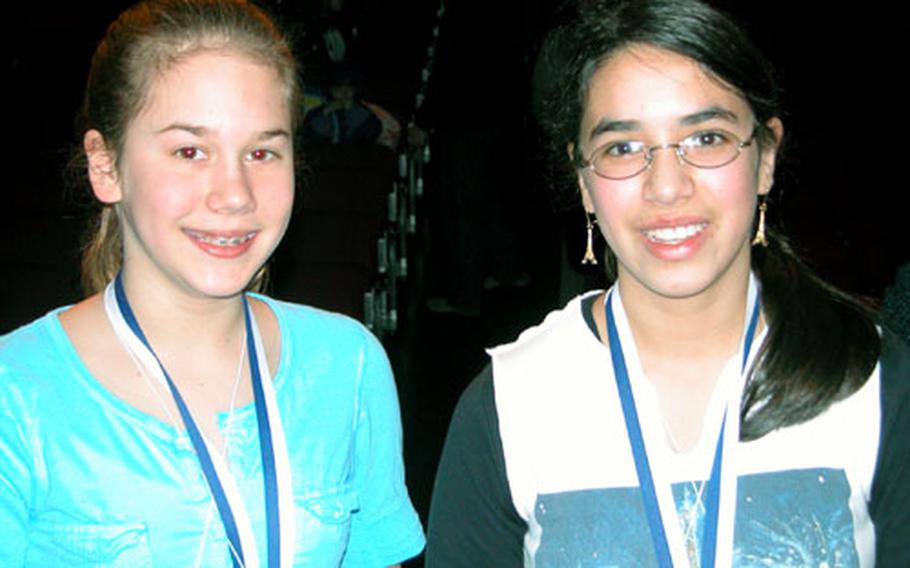 The event, which draws top spellers from throughout the Department of Defense Dependents Schools-Europe system, involved 36 spellers this year, with third-graders competing right alongside eighth-graders for the chance to advance to the Scripps Howard National Spelling Bee in Washington, D.C., in May.

Without needing to ask for a definition or use of the word in a sentence, Amanda, an eighth-grader at Kaiserslautern Middle School, spelled &#8220;salivate&#8221; and sealed a victory over fellow eighth-grader Caroline Hicks of Mannheim.

Amanda won a huge and heavy dictionary, as well as airfare and money for her trip to Washington.

Throughout 16 rounds of intense oral dissection, contestants were phased out slowly as they misplaced vowels or consonants in a variety of words picked from a Scripps Howard guide that contains about 10,000 entries and is updated annually.

Some of the words might have stumped the proud parents in the audience. Students stalled and pensively spelled out such challenges as &#8220;collywobbles,&#8221; another word for stomach pain, and &#8220;minuend,&#8221; a mathematical term for the quantity that is subtracted from in an equation.

The participants were graceful and composed in defeat. Eventually, Amanda and Caroline were the only two left standing.

For four rounds, the two girls went at it like prize fighters in the ring, both refusing to drop or blink in the face of the next word they would have to spell.

This led to another round, and the anticipation in the auditorium reached a heightened next level.

Amanda came out and spelled &#8220;pheasant,&#8221; not getting tripped up on whether a first &#8220;a&#8221; was needed. Caroline finally bowed out on &#8220;runesmith,&#8221; an obscure word meaning a writer or transcriber of ancient languages. Amanda then spelled her final word correctly to win.

Spelling bee moderator Michael Curley, a teacher at Ramstein, said that parents can sometimes take the contest more seriously than the children, but that was not the case this year.

As she got ready to go celebrate by seeing a movie with some friends, Amanda said she didn&#8217;t do a whole lot of studying to get ready for the bee. But there are some things contestants can do if they want to head to the big show in Washington next year.