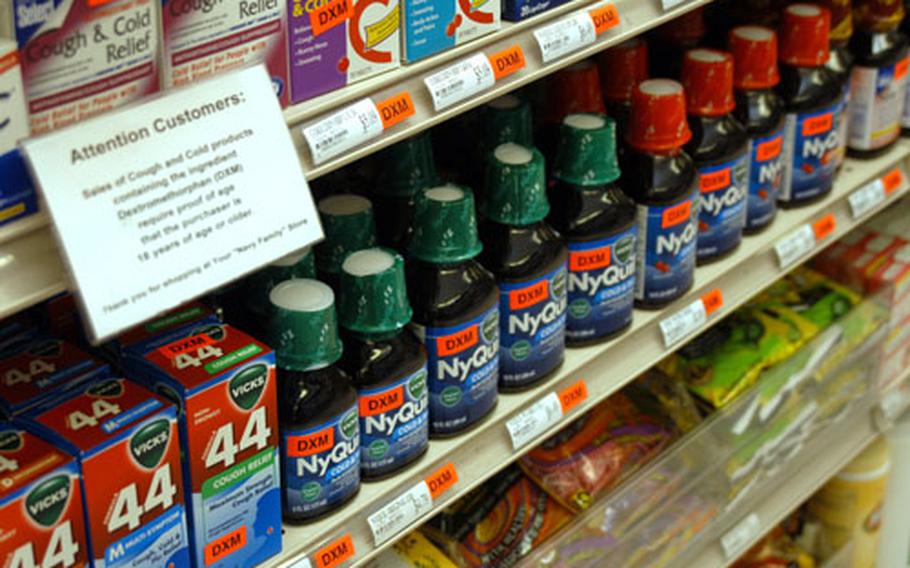 CAMP CASEY, South Korea &#8212; When Pfc. Gary Cooper would go to the Camp Casey post exchange to get his fix of cold medicine, he had to act quickly.

"You get to the store and pick it up right away, because that stuff would sell so fast," Cooper said.

Wanser recalls other soldiers grabbing at the boxes as they were stocked. On another occasion, Wanser says a South Korean employee handed him four boxes when he asked for one.

By October, AAFES officials restricted sales of medicines with DXM to two boxes per month per servicemember, after consulting with medical officials.

"You can&#8217;t tell me 300 people needed a box of dextromethorphan in a week. If people are sick, we have a free health care clinic," Perry said.

None of those spikes corresponded with an increase in doctor&#8217;s visits for upper respiratory infections, said Perry, who presented his findings at the international conference of the American Society of Addiction Medicine in April.

Coricidin and its generic equivalent were pulled completely from AAFES shelves in March, Area I general manager Ken Limtiaco said.

The limits on sales of the medicines may have led to increased shoplifting, officials said.

In January 2006, AAFES voluntarily limited the sale of DXM to customers over the age of 18.

However, different areas have imposed their own restrictions.

On Okinawa, Marine Corps officials banned all medication with DXM from four stores and placed up to 70 different medications behind the counter at others.

At the Yokosuka Naval Base exchange in Japan, all medicine with DXM has a bright orange tag. Cashiers have pictures of the products at the counter for easy identification.

High doses of DXM can cause a euphoric mania, which can be characterized by elevated mood, little desire for sleep, hyper-religiosity and distractibility. "Behavior during use is similar to PCP and LSD," Perry said. "It&#8217;s a synthetic morphine derivative. It&#8217;s been abused as long as it&#8217;s been used."

Perry once treated a patient who spent seven days in intensive care after overdosing.

The health risk is amplified because of the other ingredients in the medicines. High doses of acetaminophen, the active ingredient in Tylenol, can cause severe liver damage or death.

Other cold medicines with DXM also contain guaifenisin, which can cause hours of vomiting in high doses.