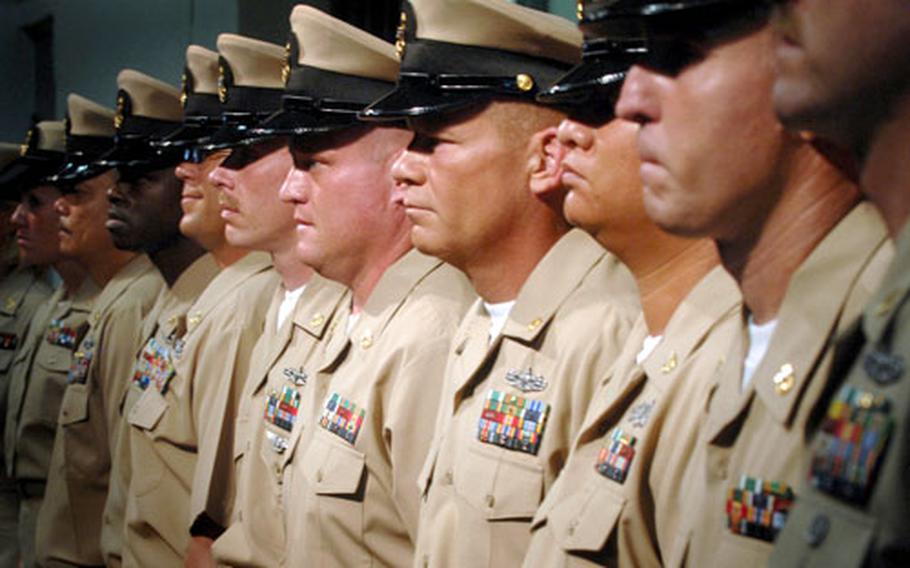 Sailors are finding it tougher to make the coveted rank of chief petty officer in recent years, due to increased retention, especially in the senior pay grades, Navy officials said this week.

There are more than 19,000 petty officers first class in the Navy eligible to make chief in the coming fiscal year.

Advancement to senior enlisted leadership positions is becoming more competitive and is at its lowest in about a decade, said Lt. Candice Tresch, a Navy spokeswoman.

Since 2004, the Navy has reduced the size of its force, including a 10 percent reduction in E-7 billets, she said.

"Now that the Navy has entered a period of stabilizing the force, we are closely monitoring the number of billets and advancement opportunity to ensure a balanced force in terms of skills, seniority and experience and to align advancement rates with the number of available billets," she said.

The Army and Air Force did not say how many E-7 billets would be available in fiscal 2010.

"Our policy is to keep promotion missions for upcoming boards close-hold," said Army personnel spokeswoman Toni DeLancey. "We don&#8217;t release any of that information until the list is officially released."

The Marine Corps did not respond to a Stars and Stripes request for promotion data.

The Navy makes a big deal out of making chief. Once promoted and "pinned" with their new anchors that signify the rank, chiefs don uniforms that, apart from the rank insignia, are the same as those worn by officers.

Those who want to get a leg up on making chief have resources to help.

"Talk to a mentor," recommended Petty Officer 1st Class Jorge Delgado, a Navy career counselor stationed in Naples, Italy. "See if they can give you their side of what it took for them. Guidance is always good."

Evaluations are "a big factor," he said, and should reflect more than a sailor doing his job. Sailors who take on extra jobs, or what the Navy calls "collateral duties," should have something to show for it, he said.

"Grab a collateral duty and do something with it, have something to show for it," said Delgado, who will vie for a chief&#8217;s slot in a couple of years.