Sailors urged to 'let go of anger' over slayings 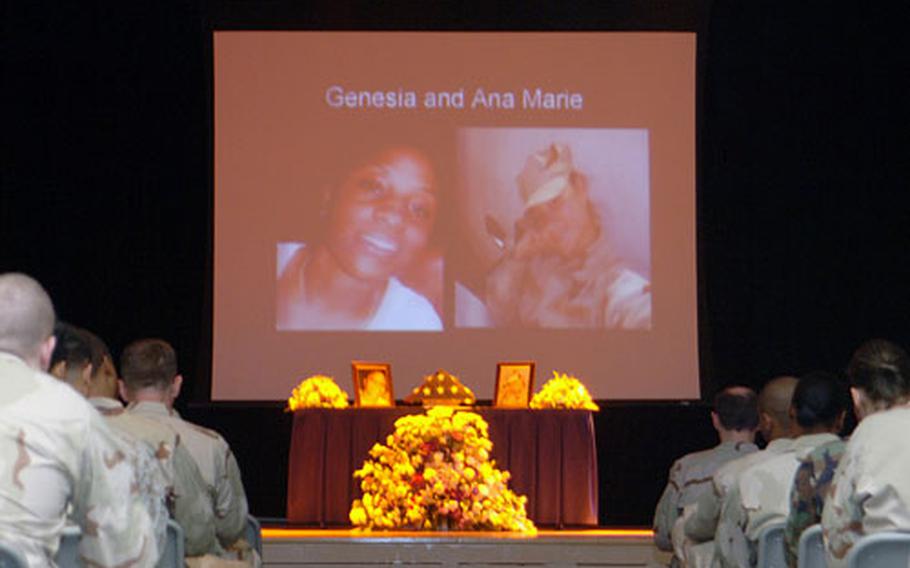 MANAMA, Bahrain &#8212; Some sailors are &#8220;quite angry&#8221; about the slayings of two colleagues, but the community needs to let go of that feeling, Vice Adm. Kevin Cosgriff said Monday.

Nearly 350 sailors packed a multipurpose room on base Monday to remember both women exactly one week after their deaths. The initial shock of the shootings has faded and turned to anger among some sailors.

That was clear from the remarks by the Navy leaders who spoke at the memorial ceremony. Commanders are doing their best to soothe those crushed by the deaths. For those still fuming over the tragedy, they preached forgiveness.

The morning of Oct. 22, fellow security forces member Clarence Jackson allegedly shot both sailors in their on-base barracks and then turned the gun on himself in a failed suicide, sources say.

Navy doctors pronounced Camacho and Gresham dead on the scene. Jackson clings to life at the Navy hospital in Bethesda, Md.

Capt. Mark Deardurff, commanding officer of Naval Support Activity Bahrain, implored sailors in the standing-room-only audience to make the right choices, including choosing &#8220;to forgive, rather than curse.&#8221;

The shooting shocked those stationed on this important Navy base located on this tiny island Persian Gulf nation. But some sources say there were warning signs before the shooting occurred.

Jackson and Gresham had a volatile relationship, sources said. He had made threats against her in the past, was punished for it and ordered to stay away from her. Sources who would only speak on the condition of anonymity said Jackson had just gotten off restriction when he allegedly shot Camacho and Gresham.

The Navy has not released any details of the shooting because it is still under investigation.

While some sailors wonder what happened, the ceremony on Monday served as their opportunity to honor the sailors they loved.

During the service, members of the unit spoke of Camacho and Gresham beside a table with framed pictures of both women and a folded American flag. A white screen behind the table flashed photos of the women, smiling and appearing happy.

Camacho, 20, joined the Navy last June and arrived at the base about two months ago. Gresham, 19, signed up for the Navy last November. She reported to the unit this past March.

Seaman Jeremiah Lamb said he and others looked at Gresham as more than just another sailor in his unit.

MANAMA, Bahrain &#8212; A sailor who allegedly shot two shipmates before trying to commit suicide a week ago has been transported from Landstuhl Regional Medical Center in Germany to the Navy hospital in Bethesda, Md., a Navy spokesman said on Monday.

The sailor remains in critical condition at the National Naval Medical Center with a self-inflicted gunshot wound to the head, said Lt. John Gay, a spokesman for U.S. Naval Central Command and 5th Fleet.

The Navy has not identified the sailor, but a hospital source at the Bahrain Defence Force Hospital and news articles have previously confirmed his name as Clarence Jackson.

An Air Force medical team flew Jackson to the United States early Sunday morning, Gay said. Jackson&#8217;s injuries are so severe that he is not expected to survive, a base source said.

The Naval Criminal Investigative Service is looking into the shooting, but no charges have been filed. If Jackson does not survive, the Navy would close the case without making charges, the Navy said.

The Navy has not released any additional details on the shootings.

Base sources who would only speak on the condition of anonymity have said that Jackson shot Seamen Genesia Mattril Gresham and Anamarie Camacho in their on-base barracks on Oct. 22.

Jackson was alleged to have had a relationship with Gresham, and had been ordered to stay away from her because of threats he had made against her.

The three sailors were members of Naval Security Force Bahrain, and Jackson was on duty at the time of the shootings, the Navy said.