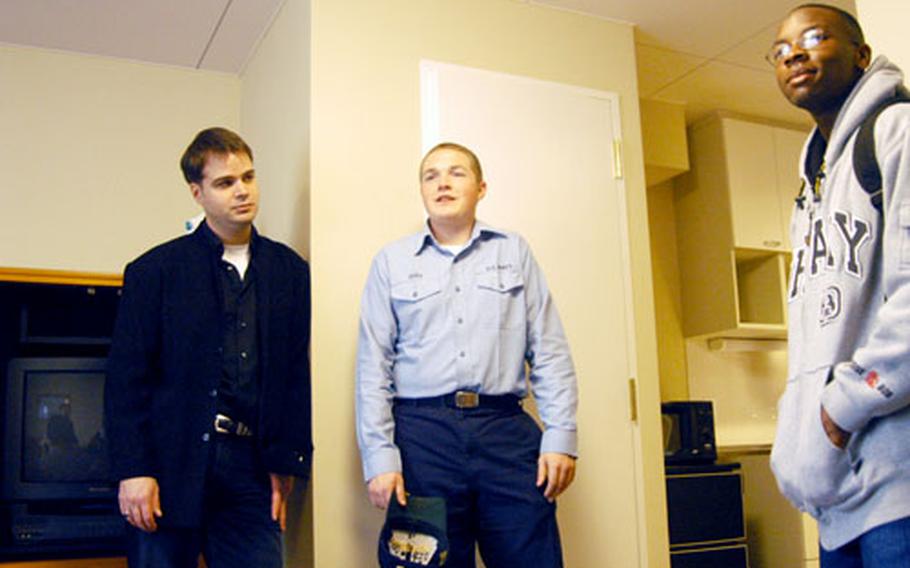 YOKOSUKA NAVAL BASE, Japan &#8212; Michael Schiller bought groceries Thursday for the first time since he joined the Navy.

He planned to watch what he wanted on the tube that night. Then the petty officer third class was going to fall asleep in a real bed.

Simple pleasures, sure, but Schiller was looking forward to them Thursday as he moved off USS Blue Ridge and into his new barracks room at Yokosuka Naval Base. He was one of 240 sailors moved off ships Thursday in the first wave of Home Port Ashore, an initiative aimed at improving the quality of life for resident junior sailors.

Schiller shares his room and bathroom &#8212; and a kitchenette and television &#8212; with one roommate, Seaman Joseph Clark, at Barracks 1492. Yesterday, he had 55 roommates in his berthing compartment. Clark had 99 roommates.

Eventually all 3,000 junior sailors now living aboard ships while in port at Yokosuka will share one of the existing barracks rooms, two or three to a room. More than $3 million in bunk beds and furniture has been ordered to reconfigure the rooms. And eventually, Navy officials have said, new construction should provide one room per sailor.

The program is blazing ahead of the original 2025 timeline because it is Commander, U.S. Naval Forces Japan&#8217;s No. 1 priority, said Regional Master Chief Lou Cruz.

The program also is anticipated to decrease the number of off-base liberty incidents. Cruz said the experience with Home Port Ashore in Hawaii and at other bases has been that sailors with rooms will be less likely to stay out all night drinking than those whose only alternative is to return to a ship. Behavior is a strategic issue in Japan, he said, and Sasebo Naval Base is making headway on the same program.

Also, Cruz said, &#8220;A good night&#8217;s sleep will help the sailors perform better, which contributes to mission readiness and will have a positive impact on good conduct. Right now, in port, they live in an industrial environment, which is not conducive to anyone.&#8221;

He said sailors will move in over the next four months as the furniture arrives. In November, more than 180 sailors are to move into a family-housing tower re-designated for single sailors. For now, rooms are assigned according to each ship&#8217;s population of sailors ranked E-4 and below.

Airman Kenneth Davis, of 7th Fleet staff on Blue Ridge, found out yesterday that he&#8217;d be one of the first to move out.