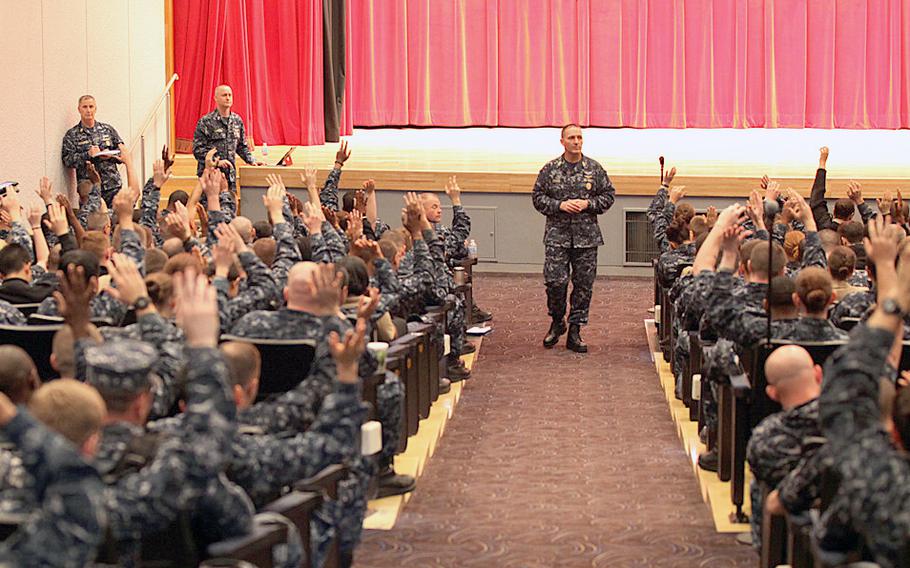 Master Chief Petty Officer of the Navy Michael D. Stevens speaks to sailors at an all-hands call at Yokosuka Naval Base, Japan, on April 23, 2014. Taking an informal poll, Stevens asked the sailors to raise their hands if they would rate Navy morale as ''good.'' (Trevor Andersen/Stars and Stripes)

YOKOSUKA NAVAL BASE, Japan — Navy efforts to address sexual assault in the ranks have improved, but it still faces challenges ranging from preserving confidentiality to fear of punishment for intervening in a potential assault, sailors told Master Chief Petty Officer of the Navy Mike Stevens on Wednesday.

The frank discussion with sailors at Yokosuka reflected the potential differences between policy solutions devised by military leaders and how those directives might be playing out in the fleet.

A petty officer first class serving as a unit victim advocate told Stevens and about 1,000 other sailors gathered at the Benny Decker Theater that privacy gaps exist in the military’s sexual assault restricted reporting system.

However, the petty officer told Stevens that the accuser’s confidentiality rights aren’t always being protected.

A 2010 Defense Department survey found that 60 percent of women and 36 percent of men who experienced unwanted sexual contact and did not report it stated that the believed the report wouldn’t be kept confidential.

A 2013 report by the U.S. Commission on Civil Rights found that confidentiality, even with a restricted report, may be difficult in deployed environments and on smaller installations.

Also, there are concerns that commanders may try to breach the confidentiality of a restricted report because they prefer to know the details of criminal offenses that occurred in their units.

Stevens noted those concerns in an interview with Stars and Stripes following the discussion.

Another sailor in the audience told Stevens that while the Navy officially encourages bystanders to intervene when they see a situation that could lead to sexual assault, sailors remain reluctant to do so for fear of punishment.

Sometimes, the bystander has been drinking and risks an alcohol-related incident, or ARI, if they intervene. Sailors can receive nonjudicial punishment for such incidents.

“There have been certain instances at my command where intervention has gone down perfectly but the person who intervened been drinking, he got an ARI, and that pushes people away,” said the sailor, who also suggested training on how sailors should react when someone else tries to intervene.

A female petty officer second class took issue with some of the Navy’s messaging and how it portrays men.

“It also seems to have the assumption that only males are the perpetrators of sexual assault and domestic violence,” she said. “And I think that is something that we should not be portraying as a military service, for the sake of gender equality.”

Sexual assault in the military has drawn increasing scrutiny from Congress and the public during the past year, leading the services to re-examine how they addresses the crime.

In early November, the Pentagon announced a 46 percent rise in sexual assault reports between October 2012 and June 2013, compared with a year earlier.