From the archives, 2007: Sailors say Kitty Hawk’s ‘homophobic culture’ forced them to out themselves USS Kitty Hawk Seamen Shaniqua Washington, right, and Burnell Wright, left, waited to leave Yokosuka Naval Base, Japan, after they voluntarily signed statements saying they were homosexual, April 4, 2007. It would be another four years before “Don’t Ask, Don’t Tell,” the policy denying service members the right to serve openly in the U.S. military, would be repealed. (Allison Batdorff/Stars and Stripes)

This article first appeared in the Stars and Stripes Pacific edition, May 6, 2007. It is republished unedited in its original form.

YOKOSUKA NAVAL BASE, Japan — The writing was on the wall for the two Navy sailors — the bathroom wall.

“Washington loves Wright” was what Seamen Burnell Wright and Shaniqua Washington saw upon entering a bathroom aboard the USS Kitty Hawk.

But other messages scrawled on the wall — like “Dyke bitches gonna get stitches” — disturbed them more, they said.

They read them loud and clear, Washington said. The sailors — both 20 years old, both married to men in the States but bisexual — weren’t welcome on the aircraft carrier where they lived and worked, she said.

“We were being singled out,” Wright said. “We were forced to quit because what we were going through on the ship.”

Because quitting the military isn’t allowed until the service commitment is fulfilled, the women used the “don’t ask, don’t tell” policy to “administratively separate” from the Navy. The policy dictates that homosexuality detracts from unit cohesion, morale and discipline, but allows homosexuals to serve in the U.S. military so long as they keep their sexual orientation secret in word and deed.

It calls for mandatory removal of those who outwardly declare their homosexuality or bisexuality, engage in or attempt homosexual acts, or attempt to marry someone of the same sex.

Washington was 18 months into her four-year enlistment. Wright served 30 months of her five-year term.

They reported the bathroom incident and the graffiti was washed away immediately. But the culprits were never caught, the women said. Then Washington found a DVD of lesbian pornography on her rack.

They began to worry that too many people “knew,” they said. They didn’t get in trouble for homosexual conduct and none of their Navy leaders asked them about it, but they were liberty buddies in every foreign port. They earned their surface warfare pins and took college classes together.

The two had been labeled “trouble-makers” because of other behavior issues, they said. Both Wright and Washington had several counseling chits in their service records and had recently been placed on restricted liberty for “disrespecting an officer” in an incident together.

“The spotlight started following us everywhere we went,” Washington said. 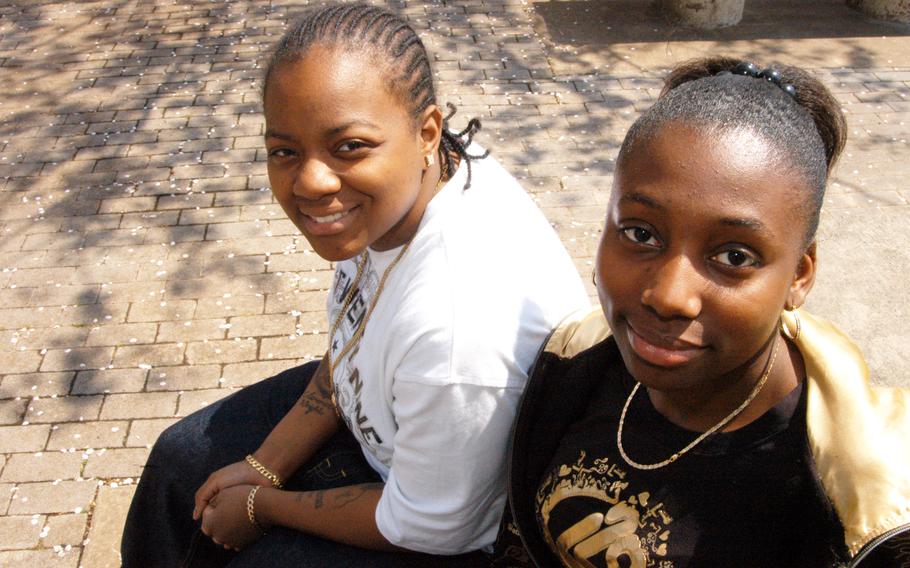 USS Kitty Hawk Seamen Burnell Wright, left, and Shaniqua Washington, right, voluntarily signed statements saying they were homosexual in order to separate from the USS Kitty Hawk. Shipboard culture was too homophobic, they said. It would be another four years before “Don’t Ask, Don’t Tell,” the policy denying service members the right to serve openly in the U.S. military, would be repealed. (Allison Batdorff/Stars and Stripes)

And as scrutiny increased, so did their fear of homophobic violence, they said.

They said they had seen “Soldier’s Girl” a few months ago, a movie about the 1999 killing of Army Pfc. Barry Winchell in Fort Campbell, Ky. It exemplified the worst-case scenario of what could happen in a homophobic military, they said. Winchell was dating a pre-operative transsexual when he was beaten to death with a baseball bat by two members of his company.

A recent comment by Joint Chiefs of Staff Gen. Peter Pace that homosexuality is “immoral” sums up the military attitude, Washington said.

“Basically, you’re treated as if there is something wrong with you,” Washington said.

Marine Maj. Stuart Upton, a spokesman for the Pentagon, told Stars and Stripes on Wednesday that harassment of any type and for any reason, including sexual orientation, “is unacceptable and will not be tolerated.”

“Leaders at all levels are expected to take preventative and corrective action against hostility to any of our service personnel.”

The services have programs to teach servicemembers what kinds of behavior are expected of them, and how to treat fellow servicemembers, Upton said.

Several Congressmen have begun a new push to re-examine “Don’t Ask, Don’t Tell.” Legislation has been introduced requiring the Defense Department to adopt policies to prevent discrimination based on sexual orientation.

The bill, introduced by Rep. Marty Meehan, D-Mass, would allow recruits and troops to share their homosexuality or bisexuality openly. More than 120 lawmakers in the House have signed on as co-sponsors.

But the legislation, introduced in February, has yet to receive a hearing before the House Armed Services Committee. In previous Republican-controlled Congresses, similar measures were proposed but never debated by the chamber.

Kitty Hawk sailors sign professional conduct forms disallowing hazing and discrimination of any kind when they report to the ship, he said, and the ship investigates any activity or environment that becomes “disagreeable.”

"The Navy requires that all sailors treat one another with dignity and respect," Dudley said.

Wright and Washington’s discharges have been the only this year aboard the Kitty Hawk related to homosexuality, Dudley said.

And while privacy concerns kept him from discussing specifics, he confirmed the results of Washington and Wright’s independent review board hearings. 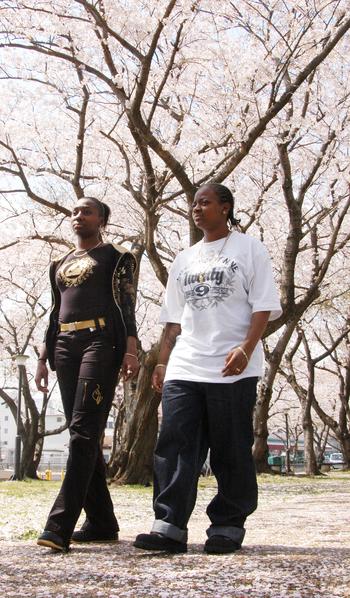 USS Kitty Hawk Seamen Shaniqua Washington, left, and Burnell Wright, right, said they wouldn’t be sorry to leave Yokosuka Naval Base this spring after they separated off the USS Kitty Hawk. The women have since returned to the States to process out of the military less than halfway through their service term. It would be another four years before “Don’t Ask, Don’t Tell,” the policy denying service members the right to serve openly in the U.S. military, would be repealed. (Allison Batdorff/Stars and Stripes)

After examining each sailors’ service record, the boards arrived at different conclusions. Washington received an honorable discharge, but Wright’s chain of command recommended a “general discharge” — the minimum status for servicemembers who voluntarily separate.

Wright said board members didn’t want to give her an honorable discharge because they “thought I just wanted to get out of the Navy.”

That some servicemembers would use “Don’t Ask, Don’t Tell” to get out of the military with their benefits intact is not an unusual argument, according to the policy’s author, Charles Moskos.

“The fastest way to get an honorable discharge in the military is to say you’re gay,” the Northwest University professor and military sociologist told Stars and Stripes.

In fact, Moskos said, about 85 percent of servicemembers are “tells” — or people who “out” themselves — as opposed to those who are found engaging in sexual acts or whose homosexuality is discovered by other means.

With military contracts so difficult to break, and servicemembers fully aware of the “don’t ask” potential for use as a loophole, “you have to look at all of these who ‘tell’ with some skepticism,” Moskos said.

The wars in Iraq and Afghanistan also have added incentive for some who might try to use “don’t ask” as a way to get out of the service and into the lucrative civilian contracting world, after taxpayers have paid for their expensive military training, Moskos said.

But the Servicemembers Legal Defense Network — an advocacy group for non-heterosexual servicemembers — has a different take on self “outing.”

“I can definitely say that we have seen many instances over the years of clients deciding to ‘come out’ because they felt it was their only option in escaping harassment or a profoundly homophobic work environment,” said Kathi Westcott, the group’s deputy director for law. “In reality, holding people accountable to harassment is fairly rare.”

Washington and Wright, now in Washington state finishing Navy paperwork, call their experience a sad ending for two sailors who had once aspired to be officers.

Wright said she’ll return to Florida to study criminal justice and to her husband who doesn’t mind her bisexuality.

Washington said she plans to study business management and likely move to Florida to live near Wright. She had really planned to make the Navy her career, she said.

“I was ready to go all the way — seaman to admiral,” Washington said. “I was A-J squared away, and everyone complimented on my sharp creases in my uniform. Now I just want to get out.”

Stars and Stripes’ Lisa Burgess and Leo Shane contributed to this report from Washington.

Additional articles from this 2007 package can be found here and here.

Check out Stars and Stripes’ decades-long coverage of the “don’t ask, don’t tell” policy and the road to its repeal here.