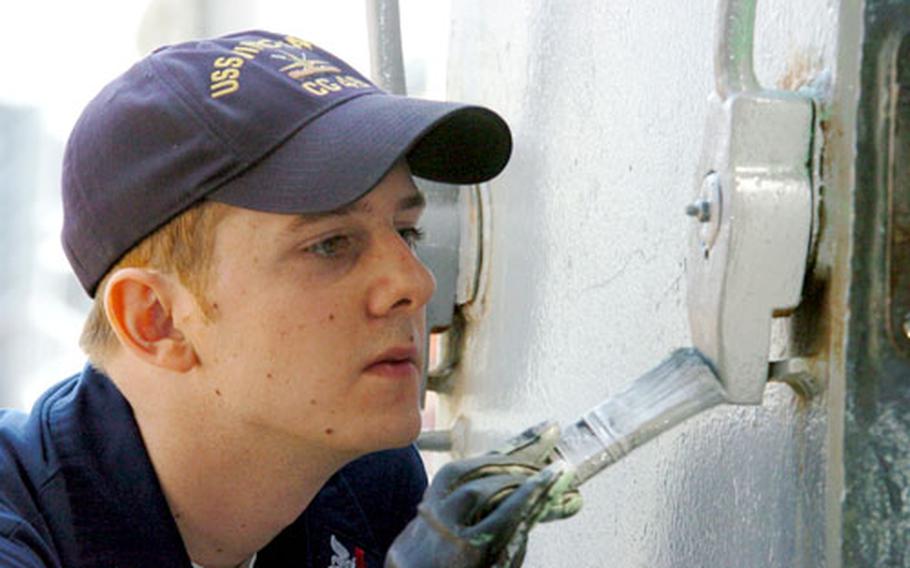 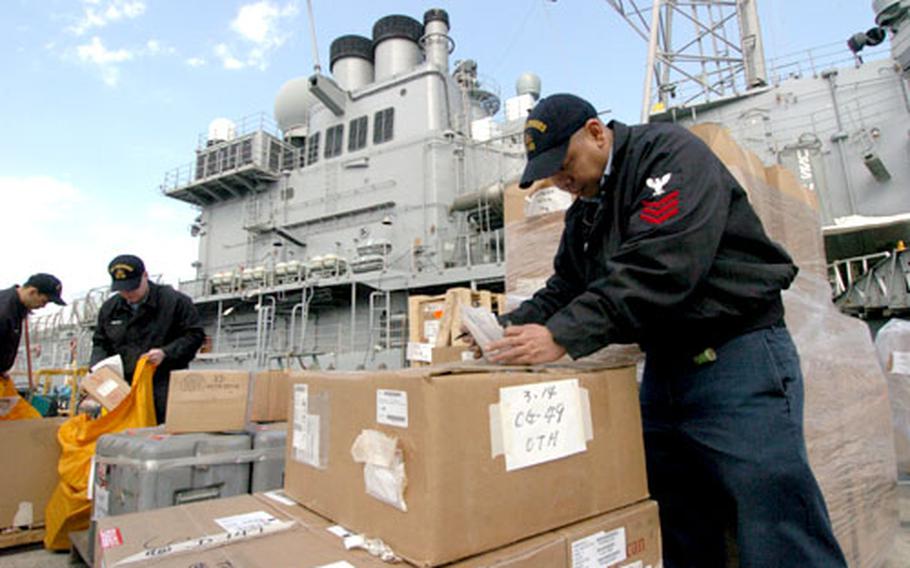 Petty Officer 1st Class Bernard Abanto, right, from S-1 Division, checks receipts for parts while other sailors from the USS Vincennes pick up their supplies on the pier at Yokosuka Naval Base. Abanto will transfer to the USS Kitty Hawk after the ship’s decommissioning. (Jim Schulz / S&S) 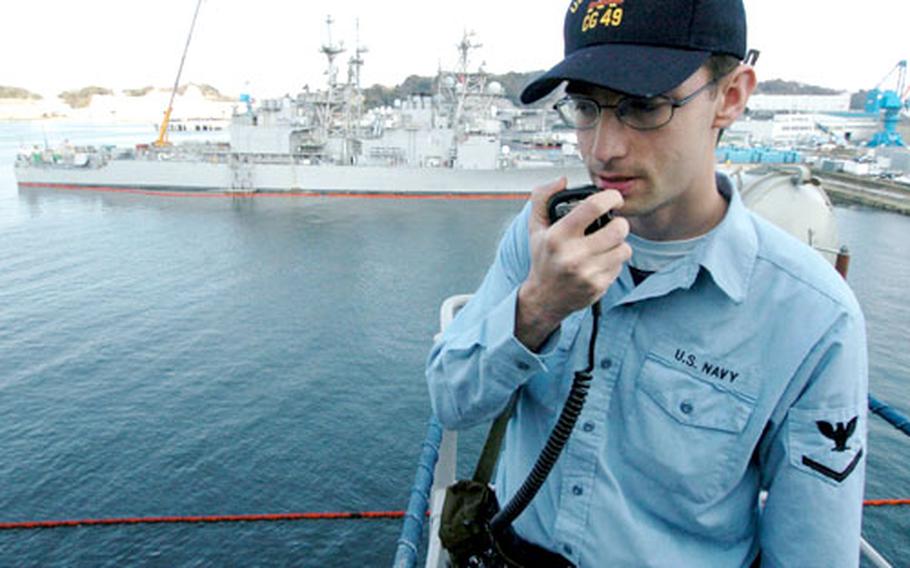 Petty Officer 3rd Class Patrick Iliff, from CG Division, keeps an eye out for waterborne threats while standing topside rover watch on the USS Vincennes. Iliff will transfer to the USS Chancelorsville after the decommissioning. (Jim Schulz / S&S) 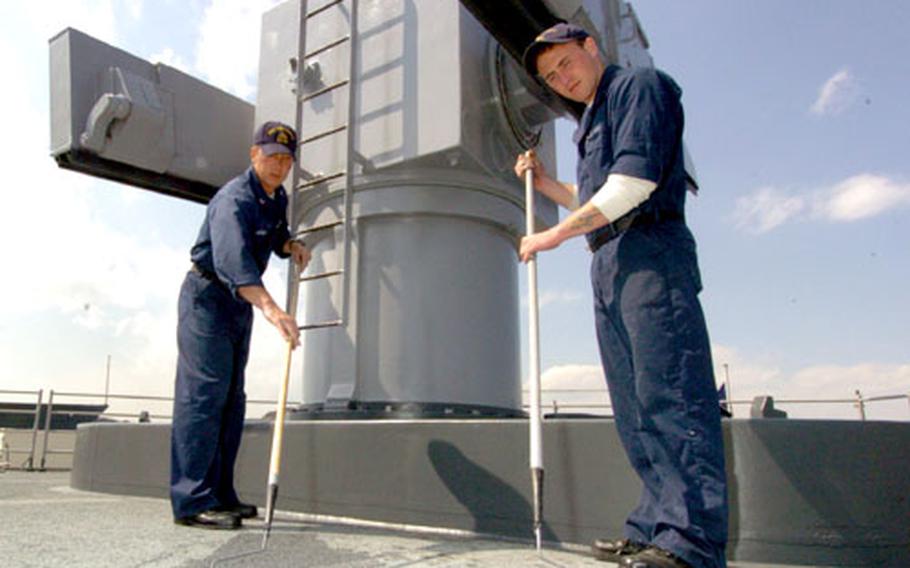 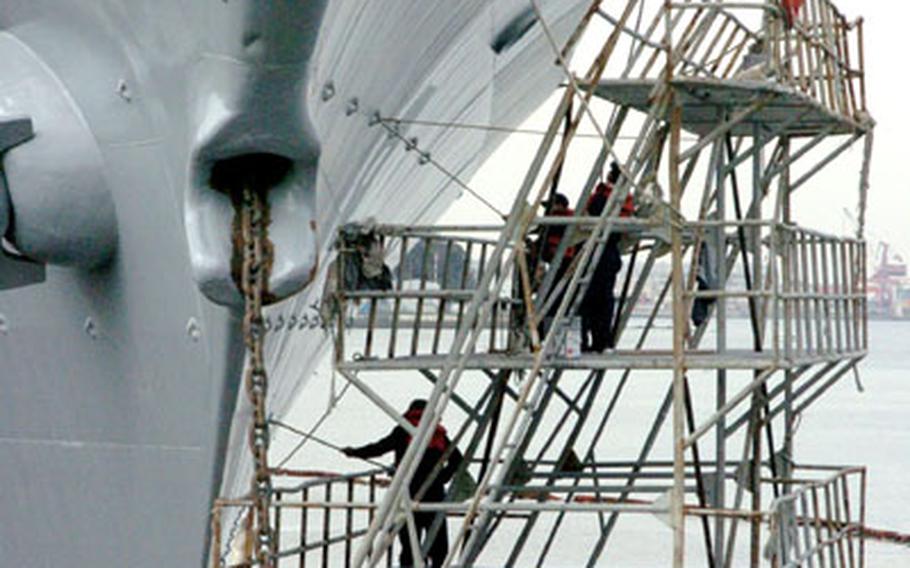 USS Vincennes sailors work from a paint float to ready the ship for its decommissioning ceremony. (Jim Schulz / S&S)

YOKOSUKA NAVAL BASE, Japan &#8212; There might not be any cracks in the hull, chipped paint or old seals to mend where he&#8217;s going.

Petty Officer 3rd Class Joseph Beier, a damage controlman, is one of several dozen sailors crossing over from the USS Vincennes, currently at Yokosuka, to the newer USS Lassen.

The Vincennes is moving to San Diego where, after two decades of service and many memorable and even infamous experiences, it will be decommissioned in June.

The Lassen, a guided-missile destroyer, will replace the cruiser at Yokosuka this summer.

For the 360 sailors usually assigned to it, losing the Vincennes means a little less repair work and more modern facilities, but also less space to live and the loss of their home.

The Vincennes will be hard to forget. In the past few years, the ship has sailed more than any other in Destroyer Squadron 5.

Last year, it towed a stalled Navy ship to safety before an approaching typhoon.

In the early part of its life, the ship was famous for shooting down a commercial Iranian airliner after mistaking it for a military aircraft in the Persian Gulf.

Many of the sailors aboard today were infants when that occurred, and the 1988 incident isn&#8217;t discussed.

They instead talk about what they do: Team 49, named for the ship&#8217;s hull number, is called the go-to ship. When others have engine trouble, the Vincennes is ready to fill in, Englebert said.

The ship was created to be an air-defense command, to help defend a carrier from air attacks. It also was designed to serve as a flagship and thus has very modern communications technology, including better Internet connections than on other ships, Englebert said.

The ship could sail for another decade, he said, but the missile technology it carries is outdated and has been deemed too expensive to update.

So its sailors now prepare for the decommissioning.

Before leaving Yokosuka next week, sailors are sprucing up the ship for the farewell celebration.

The ship will sail to Pearl Harbor, Hawaii, to pick up family members for a Tiger Cruise to California. As they sail, sailors will go through space-by-space fixing corrosion and making repairs. Eventually, each compartment will be cleared and sealed.

&#8220;It can be stressful if you&#8217;ve got family,&#8221; added Senior Chief Derek Matthews, a sonar technician. He will go with the ship to San Diego then return to Japan to pack out.

Of the sailors now assigned to the ship, about 60 will remain in Japan on other ships or shore commands. Nearly 90 will cross over and return with the Lassen, Englebert said.

That leaves about 180 sailors who need new places to go. About half are single sailors who live aboard ship, so Yokosuka will have only about 90 families to relocate.

The ship&#8217;s crew will miss the vessel itself, but they&#8217;re more likely to miss the people, Englebert said.

&#8220;When you have a small community of folks living together, you start to become a family. The hardest thing is we are losing a family.&#8221;

More about the Vincennes ...

The name Vincennes, also that of a Revolutionary War-era fort in Indiana, has been assigned to four U.S. naval vessels.

The first was a Boston-class sloop of war, which operated from 1826 to 1867 and had, according to many historians, one of the most extraordinary careers in the Navy. The ship was the first U.S. warship to circumnavigate the globe and the first to spot Antarctica.

The ship visited Japan in a failed attempt to open the country to foreign trade in 1846, seven years before the negotiations by Commodore Matthew Perry accomplished that task.

The ship also participated in the Civil War.

The next incarnation was a heavy cruiser employed during World War II and sunk near Tulagi by Japanese forces in 1942.

The third ship, a light cruiser commissioned in 1944, continued on in World War II, participating in the battles of Guam, the Philippines, Okinawa and Formosa.

The modern ship, the third Ticonderoga-class cruiser, was commissioned on July 6, 1985. The ship is 567 feet long, travels at about 30 knots and cost about $1 billion, according to Navy records.

The ship carries two SH-60 Sea Hawk helicopters and has about 360 personnel aboard.

In 1988, the Vincennes sailed on a six-month deployment to the Persian Gulf to participate in Operation Earnest Will.

On July 3, 1988, while working to safeguard Kuwaiti commercial vessels, the ship mistook an Iranian commercial Airbus, Iran Air Flight 655, for an Iranian F-14 and shot down the aircraft, killing all 290 people aboard, Navy records show.

In 1996, the U.S. government paid Iran $61.8 million in compensation for the 248 Iranians killed in the shoot-down, according to Navy records.

The ship never returned to the Gulf, though Navy officials say contrary to rumors it was never barred from returning.

In 2001, the ship sailed to the Indian Ocean for air defense of Diego Garcia during Operation Noble Eagle.

In recent years, the ship has participated in exercises to practice the defense of South Korea, one of its missions.

The ship joined the USS Kitty Hawk battle group in 1994 and changed homeport from San Diego to Yokosuka Naval Base, Japan, in 1997.

The ship and its company have been awarded the Navy Meritorious Unit Citation, the Battle &#8220;E,&#8221; three times; the Combat Action Ribbon and the National Defense Medal and the Sea Service Deployment Ribbon with four stars.

The ship&#8217;s crew will hold a ceremony at Yokosuka at 10 a.m. Tuesday, one day before it sails for San Diego, where it will be decommissioned.