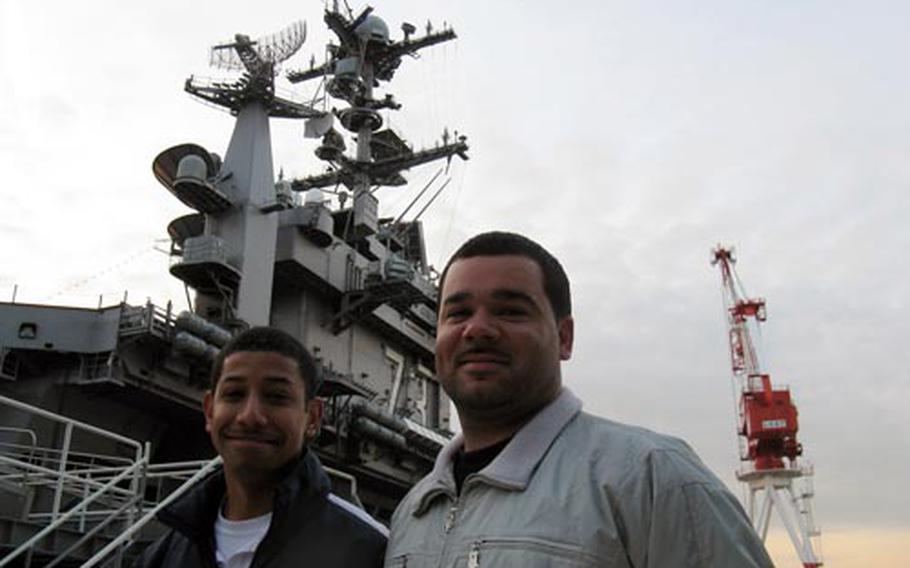 Petty Officers 1st Class Henry Caballero, left, and James Brice rescued of a Japanese man from the train tracks at Shinagawa Station in Tokyo on Friday. The two sailors jumped about five feet down to the track bed to save the unconscious man. (Erik Slavin / S&S)

"I couldn&#8217;t believe if it was true," said Caballero, a Bronx native stationed aboard the USS George Washington. "I thought maybe my eyes were playing tricks on me."

Caballero&#8217;s eyes were fine, as were those of Petty Officer 1st Class James Brice.

A Japanese man wearing white, in his late 20s to early 30s, had fallen about five feet and lay unconscious.

"He walked off the platform like he saw an invisible step," said Brice, of Rogersville, Tenn. "He hit the rails and it sounded like something was broken."

Caballero checked for the next train, then jumped to the tracks and hoisted the man up by his armpits.

Meanwhile, Brice had joined Caballero on the tracks.

The Shinagawa station is one of the busiest in Japan, so they knew it wouldn&#8217;t be long.

Caballero saw lights in the distance, somewhere between 500 and 800 yards away, moving toward him.

Hands from the crowd began stretching over the platform and the two sailors passed the unconscious man to them. The crowd then helped Caballero and Brice up.

Fortunately for them, Caballero says, he thinks someone had alerted the train to stop.

A man came out of the crowd and began checking the unconscious man&#8217;s vital signs. Medics and security showed up soon afterward. The man&#8217;s breathing was shallow, but he regained consciousness.

"I thought he would have at least broken something," Brice said. But the only thing wrong with him was that his jacket was dirty.

The man was released without being sent to the hospital, a JR East spokesman said Wednesday. The railway spokesman would not release the man&#8217;s name.

The two sailors just wanted to get back to Yokosuka afterward, but they heard an elderly man from the crowd tell security officers about the gaijin, or foreigners, who had rescued the man.

A younger Japanese man from the crowd helped translate before the two sailors could continue on.

"The guy said it was pretty amazing, that you guys are Americans and you&#8217;re helping a Japanese guy," Brice said. "But we don&#8217;t really think about it that way. We see a guy in distress and we help them out."