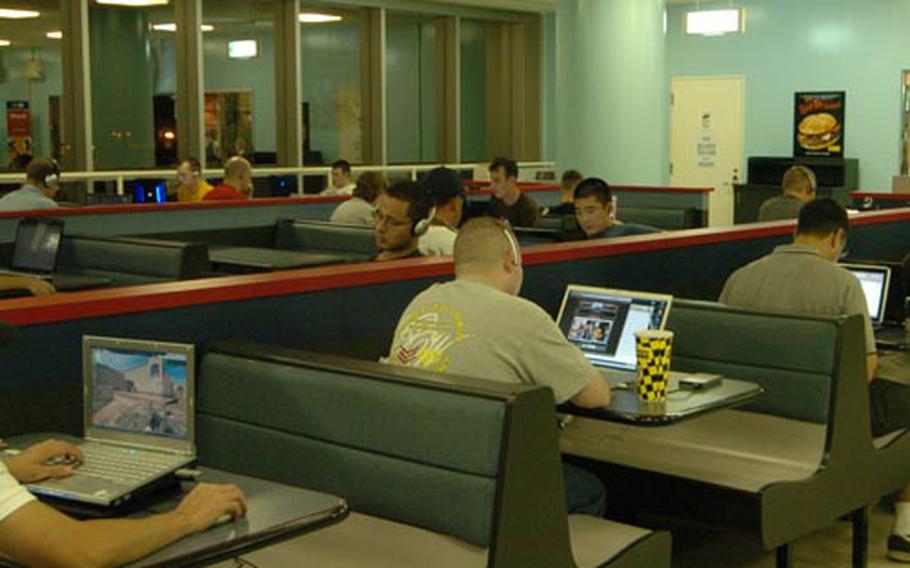 Upon their Thursday arrival in Japan, many USS George Washington sailors surf the Web at Yokosuka&#39;s Fleet Recreation Center rather than venture off base. (Tim Wightman / S&S)

YOKOSUKA NAVAL BASE, Japan &#8212; One fire. New leadership. A three-month repair stop in San Diego. A carrier swap that brought 600 new sailors aboard.

After an eventful six months, the sailors of the USS George Washington reached their final destination Thursday &#8212; Japan &#8212; although the nuclear-powered aircraft carrier heads back out to sea next week for the International Fleet Review in South Korea.

But on Thursday, when the George Washington reached Yokosuka Naval Base, sailors had plans for their new country of residence.

Darnell Bledsoe said he was heading to Tokyo.

Closer to home, third class petty officers Jamie Schulze and Justin Kudlacik were heading to CoCo&#8217;s, a popular curry house down the road, where Kudlacik was going to get the "10," the highest on the spice scale.

Ship leaders said Thursday that the crew rebounded well from the May 22 fire that broke out while the carrier was at sea, injuring 37 sailors, causing $70 million in damages and delaying the ship in San Diego for three months for repairs.

The George Washington&#8217;s commanding officer and executive officer were replaced after a report found the fire was caused by a combination of cigarette smoking and improperly stored flammables. Six other sailors were reprimanded in connection with the fire. The new executive officer, Capt. Karl Thomas, declined to give reporters details of the reprimands, saying the ship has moved forward.

Blending the two crews was tough for the first week, said Command Master Chief Petty Officer Jeffrey Clark, but now sailors have "jelled together under the one-team, one-fight" concept.

Murray, as Scotto&#8217;s self-appointed tour guide Thursday, was taking him to Yokohama.

"I tell them about Kamakura, how to register your car and to go to the 100-yen store," Uemoto said. He is a 10-year Japan resident and married a Japanese woman, taking her family name, he said.

The 20-year-old seaman said he&#8217;ll start by "looking here and there" and "grabbing some good food."

All George Washington sailors, whether they cross-decked from the Kitty Hawk or not, will be following 7th Fleet&#8217;s liberty policy that puts junior sailors on a probationary period before they get overnight liberty, said the ship&#8217;s spokesman, Lt. Cmdr. Bill Urban. This means all sailors E-3 and below will be "white card holders" and back on the ship before midnight, Urban said. E-4s are eligible to petition for "blue card" or overnight status starting Friday, he said.

"The screening will start tomorrow, and if they&#8217;ve demonstrated good behavior for a long time, they have a good chance of getting their blue cards," Urban said Thursday.

One George Washington sailor didn&#8217;t wander too far from the ship. He entrenched himself on the third floor of the base&#8217;s Fleet Recreation Center with a computer, telling a reporter he didn&#8217;t want to be bothered.

Petty Officer 2nd Class Rafael Batista was more adventuresome, setting off on foot to check out his new home.

Stars and Stripes reporter Tim Wightman contributed to this story.