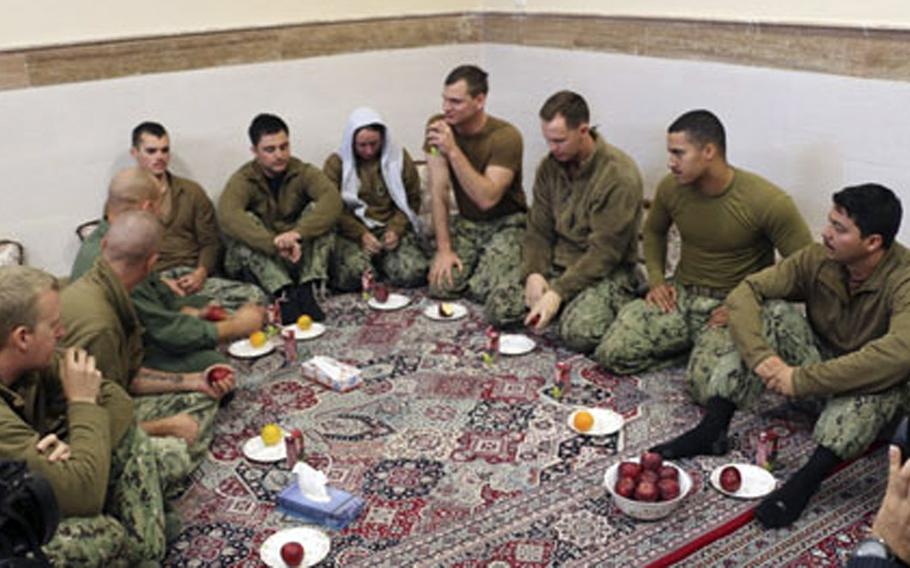 This picture released by the Iranian Revolutionary Guards on Wednesday, Jan. 13, 2016, shows detained American Navy sailors in an undisclosed location in Iran. (Sepahnews)

WASHINGTON — The speed with which Iranians released 10 sailors detained after their boats drifted into territorial waters Tuesday took much of the steam out of what could have become a major international incident — and a blow to President Barack Obama at a time when Republicans are slamming him over the pending deal to curb, not eliminate, Iran’s nuclear program.

Iran is set to receive $100 billion in frozen assets after the agreement goes into effect, expected within days. The release of the money could have been delayed if the sailors were not quickly released.

Complicating the situation was a propaganda video by the Iranians, released just hours after the sailors were freed, showing one of them making a controversial apology.

The Iranians used the video to declare that the U.S. had officially apologized.

The State Department countered that no official apology had been extended from the U.S., and thanked Iran for the sailors’ speedy release, which incited some on the Hill.

“The Administration is pretending as if nothing out of the ordinary has occurred,” said Sen. John McCain, R-Ariz., chairman of the Senate Armed Services Committee. “Under international law, sovereign immune vessels like navy ships and boats do not lose their sovereign immune status when they are in distress at sea.”

McCain also said that the detention and apparent arrest of the sailors was a violation of international law.

Meanwhile, the U.S. Navy is debriefing the 10 sailors, looking to get details about the apology.

“They appear to be in very good shape. We’ve been in touch with all of their families,” said Secretary of the Navy Ray Mabus, who was speaking at an annual Navy conference in Crystal City, Va. “We’ll know more as they are debriefed over the next … little while.”

Each of the 10 U.S. sailors is going through a reintegration and investigation process to help officials get a clear understanding of what happened and to get the sailors medical or psychological care as needed, senior defense officials told Stars and Stripes.

The Navy will continue to investigate the circumstances of the incident to see if there was wrongdoing that led to the boats ending up in Iranian possession. Investigators are likely to look at the circumstances of the video, whether the sailors were under duress, or whether something else might have led to the apology, the defense officials said.

Asked if the Navy put the two small patrol craft and their crews at unnecessary risk with a route that was so close to Iranian territory, Mabus said he would have to see the findings of the investigation.

The sailors “operate all the time in the waters in the Arabian Gulf … those are pretty constricted waters,” Mabus said. “In terms of this specific mission … we’re going to have to wait until we get more information coming from these sailors and from the boats that we’ve gotten back and the equipment on those.”