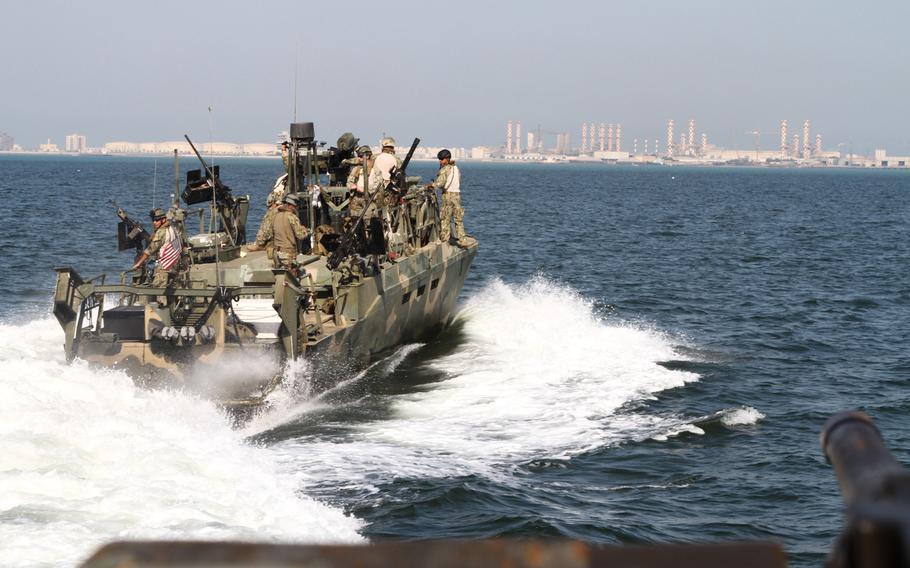 Command Riverine Boat from Coastal Riverine Squadron Four, operating in the U.S. 5th Fleet area of responsibility, makes its way to a safe location in the Persian Gulf for a weapons exercise Oct. 20, 2013. The Persian Gulf was one of several places where troops will no longer receive imminent danger pay thanks to a recent decision by the Defense Department. The new rule takes effect on June 1. (Hendrick Simoes/Stars and Stripes)

Command Riverine Boat from Coastal Riverine Squadron Four, operating in the U.S. 5th Fleet area of responsibility, makes its way to a safe location in the Persian Gulf for a weapons exercise Oct. 20, 2013. The Persian Gulf was one of several places where troops will no longer receive imminent danger pay thanks to a recent decision by the Defense Department. The new rule takes effect on June 1. (Hendrick Simoes/Stars and Stripes) 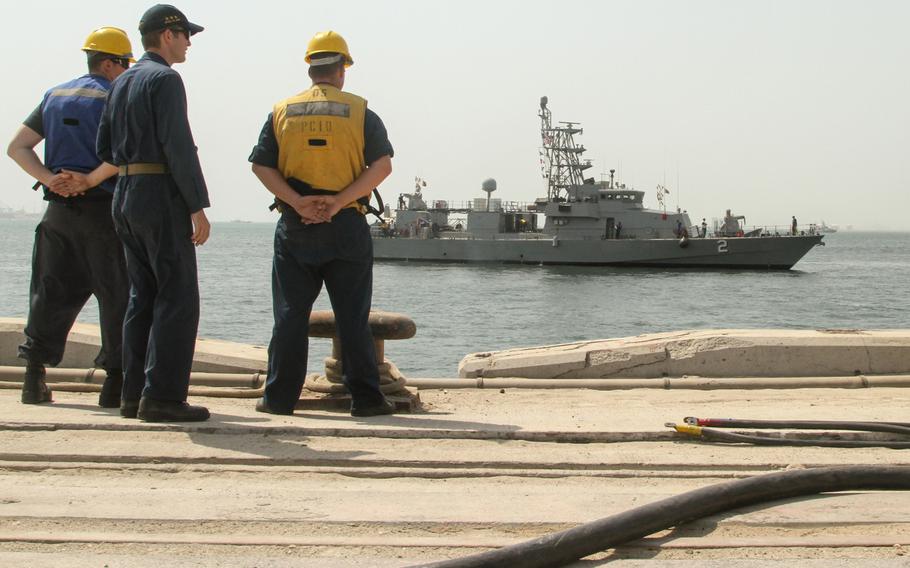 Line handlers stand ready to moor the USS Tempest to its new home in Mina Sulman, Bahrain on July 3, 2013. U.S. troops living in Bahrain say the Defense Department is sending a mixed message by eliminating imminent danger pay for servicemember while still maintaining a large security presence in the region. (Hendrick Simoes/Stars and Stripes) 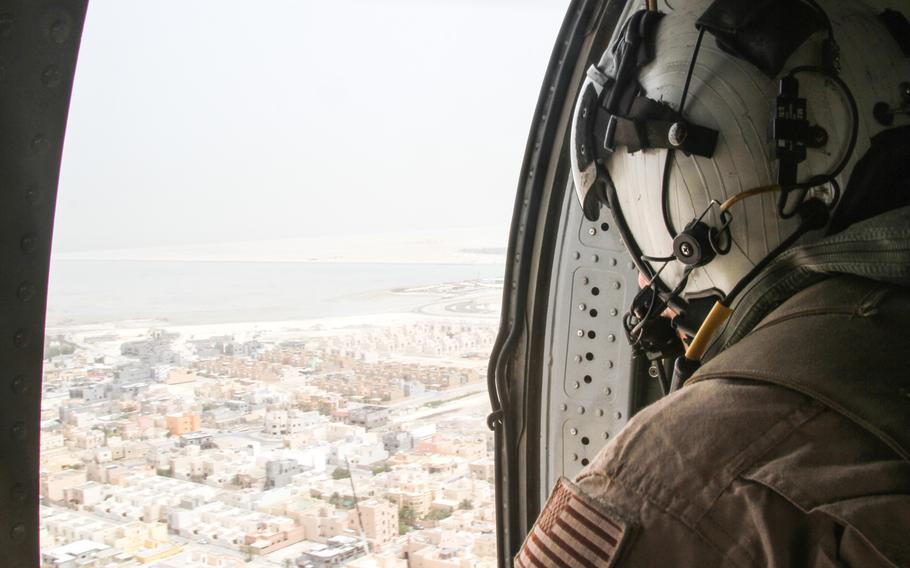 Petty Officer 3rd Class Travis Calvan, an air crewman, looks on while aboard an MH-60 helicopter flying over Bahrain on May 21, 2013. Despite a large security presence at Naval Support Activity Bahrain, the Defense Department has decided to eliminate imminent danger pay for U.S. troops living there. (Hendrick Simoes/Stars and Stripes)

MANAMA, Bahrain — Many sailors in Bahrain are questioning the Defense Department’s decision to eliminate imminent danger pay for servicemembers stationed in this island nation, which has the largest security presence of any navy base.

The Pentagon’s move, announced Friday, will mean that servicemembers based here will lose a $225-per-month pay incentive that has been in effect since 1997.

Naval Support Activity Bahrain, home to the U.S. 5th Fleet, has the biggest Navy security presence of any base in the Navy, according to base officials. About 700 of the approximately 3,000 sailors in Bahrain are security personnel, making it the largest unit on base. They’re charged with protecting the base and the piers where U.S. warships port.

Many of the sailors interviewed pointed out that if there is no imminent danger, why does the base still have that level of security presence, and why do so many areas of Bahrain remain off limits?

The tiny kingdom has been the site of sporadic protests since 2011, when authorities crushed a popular uprising dominated by the Shiite Muslim majority which is demanding political and economic reforms from the Sunni Muslim political establishment. Human rights groups say at least 89 people have died in the unrest.

Nonetheless, some personnel assert that Bahrain is safer than most major American cities, with the majority of personnel living off base, eating out and visiting shopping malls. Despite the frequent protests, there have been no direct attacks on U.S. citizens to date, according to the U.S. embassy.

Some of the servicemembers interviewed said this leaves them feeling guilty they get paid the same amount of imminent danger pay as troops serving in Afghanistan.

Bahrain’s government welcomed the DOD decision as a positive step.

“We look forward to bolstering our cooperation with the U.S. 5th Fleet. This news is not surprising as Bahrain and the other GCC countries have been a beacon of stability in a volatile region,” the Information Affairs Authority said in a statement to Stars and Stripes.

While the level of danger is a frequent topic of conversation among servicemembers, sailors almost unanimously concur that the allowance, amounting to an extra $2,700 a year, acts as an incentive to come to a desert island in the Persian Gulf.

“I could have taken orders anywhere, but the reason I came here was the cash,” said Lt. Cmdr. Dean Liner, who arrived in Bahrain last week. “What about my sailors? If it’s an incentive enough for a lieutenant commander, how much more of an incentive is it for junior sailors?” he asked.

“I picked orders to come here,” Petty Officer 3rd Class Blake Contini said, explaining that the extra money was a major factor in that decision. “Back in the States, I was making $850 per paycheck ... here, $1,300,” when factoring tax free status and other allowances. He said he uses the monthly $225 imminent danger pay to pay for college loans.

Other junior sailors interviewed by Stars and Stripes also claimed the extra money was a key factor in enticing them to volunteer for duty in Bahrain.

Lt. Cmdr. Jamie Stall-Ryan, a Navy chaplain who recently served a yearlong tour in Bahrain while his wife and two young sons stayed at his previous duty station in Annapolis, Md., said it was his sense too, that the pay “had a lot to do with getting people to take the assignment.”

“Extra money in the pocket seemed to be the attraction for many. However, with that being said, I did not see it as a safe place for my family,” Stall-Ryan said. “Too many riots and protests ... I chose to leave them behind, and it was a very smart move on our part.”

During his visit to Bahrain in November, Chief of Naval Operations Adm. Jonathan Greenert said he didn’t support removing the danger pay incentive. “The danger could go away but the quality is still not there,” he said.

Some of the servicemembers interviewed pointed to the lack of a commissary on the base and the resulting expensive grocery bills as evidence for the need of an extra cash incentive. To offset some of this concern, the DOD also announced the establishment of a $50 monthly hardship duty pay for servicemembers in Bahrain starting June 1 — the same day imminent danger pay ends.

Stars and Stripes reporter Jennifer Hlad contributed to this report.