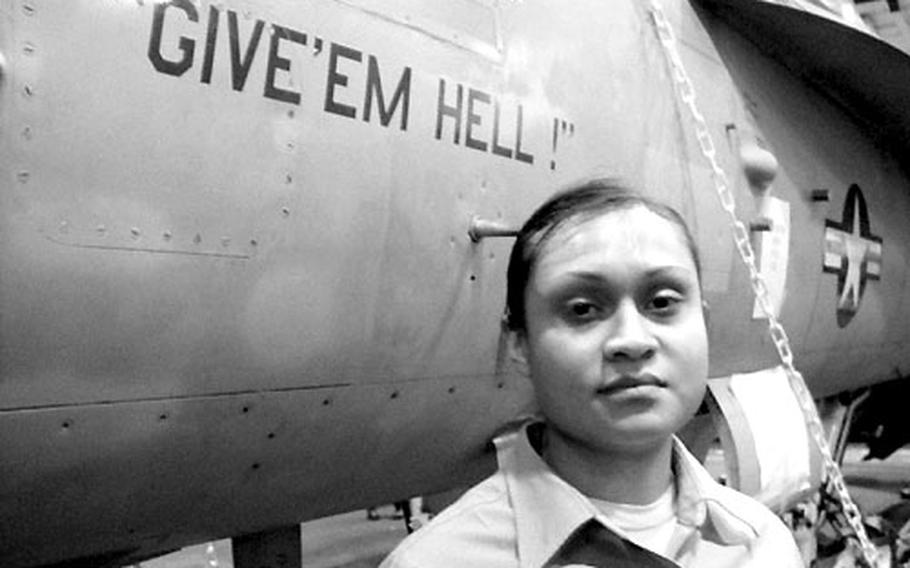 “Weekends don’t exist on the boat,” says Petty Officer 3rd Class Angela Lemus, who does maintenance and repairs on F/A-18 Hornets on the USS Harry S Truman seven days a week. Servicemembers on their first deployment have had to adjust to different schedules and other facts of life aboard the Truman. (Kendra Helmer / S&S)

“Weekends don’t exist on the boat,” says Petty Officer 3rd Class Angela Lemus, who does maintenance and repairs on F/A-18 Hornets on the USS Harry S Truman seven days a week. Servicemembers on their first deployment have had to adjust to different schedules and other facts of life aboard the Truman. (Kendra Helmer / S&S) Seaman Apprentice Monique Martin puts tape up so sailors can paint a wall in the hangar bay on the USS Harry S Truman. (Kendra Helmer / S&S)

Sailors on their first deployment say life on the aircraft carrier takes some getting used to.

Seaman Chad Reeves sums it up pretty well: &#8220;Well, I never lived on something that moved,&#8221; drawled the Texas native whom fellow sailors quickly nicknamed Cowboy.

It&#8217;s the first time overseas for many of the Norfolk, Va.-based sailors. Becoming part of a floating city in the eastern Mediterranean Sea that&#8217;s home to nearly 5,400 people has been quite an adjustment for some of them.

Early into his six-month deployment, Reeves was still learning his way around the USS Harry S Truman &#8212; a maze of corridors leading to 2,700 compartments.

But the crew is quick to brag about the young carrier, commissioned in 1998.

Home is a word that creeps into conversations often.

Seaman Nicholas Barone, 21, said chitchat revolves around family and musings about whether the routine deployment will extend past June and take them beyond the Mediterranean.

On such long deployments, he said, you lose track of what day it is and even the time of day.

Just walking through the hangar can be a bit tricky for newcomers; three to five people a week report to the medical office with head injuries after bumping into aircraft, said Petty Officer 2nd Class Karlton Bethea, a corpsman.

There are also lots of stumbles down ladder wells. Bethea chuckled when recalling a patient who fell on nonskid material. &#8220;Man, the way he explained it, &#8216;I tripped on a nonskid and stuck my face out to break the fall.&#8217;&#8221;

Still, some sailors who had been stuck on shore were looking forward to sea duty.

Seaman Recruit Michael Reed and Seaman Apprentice Clinton Monroe had been waiting in the air terminal at Sigonella, Sicily, for several days for a lift to the carrier. They would make it as far as getting on one of the flights &#8212; helmets on, earplugs in, ready to get to sea &#8212; only to be bumped off at the last minute.

Monroe and Reed said they weren&#8217;t sure what to expect of life on a carrier. Reed, 19, was gung-ho and ready to settle in.

&#8220;I think someone needs to put Saddam in his place,&#8221; said the aviation structural mechanic for F-14 Tomcats of Iraqi President Saddam Hussein.

Before leaving home, Reed, 19, tried to ease the fears of his wife, whom he married in June.