Sailors of USS Carr rescue fishermen off coast of Africa 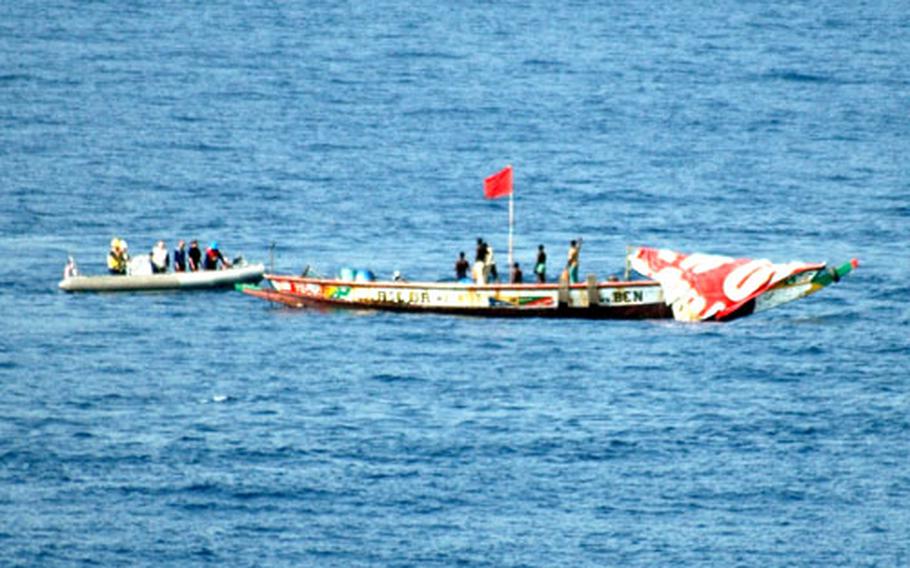 A Rigid Hull Inflatable Boat from the Carr approaches a distressed vessel. The vessel was spotted by lookouts from the 6th Fleet command and control ship USS Mount Whitney. (U.S. Navy)

A Rigid Hull Inflatable Boat from the Carr approaches a distressed vessel. The vessel was spotted by lookouts from the 6th Fleet command and control ship USS Mount Whitney. (U.S. Navy) The USS Carr approaches a distressed vessel off the coast of Sierra Leone, Africa. (U.S. Navy)

Sailors from the frigate USS Carr rescued six Ghanaian men Saturday who had been stranded at sea for 35 days with a dead motor and no provisions left onboard, a U.S. Navy spokesman said.

The Carr, along with Gaeta, Italy-based USS Mount Whitney, are heading to Liberia to take part in Monday&#8217;s presidential inauguration. Two Mount Whitney sailors spotted the small boat and its men waving for help, Navy 6th Fleet spokesman Lt. Chris Servello said in a phone interview Sunday. The boat was about 100 miles off the coast of Sierra Leone.

The six men were in need of medical help, food and water, and had resorted to drinking sea water, which can be fatal.

The U.S. sailors provided the men with food and water and a Navy corpsman re-hydrated one of the men using an IV, Servello said. &#8220;They were pretty thirsty and pretty hungry. I know they had resorted to drinking sea water.&#8221;

The men declined the U.S. Navy&#8217;s offer for a ride to the ship&#8217;s next port-of-call, so in addition to provisions, the Navy provided the mariners with a new motor and enough fuel to reach land, Servello said.

Using a Rigid Hull Inflatable Boat, Carr sailors and two Ghanaian exchange officers, part of the Carr&#8217;s crew for its West African deployment, boarded the boat. The six men spoke limited English, but enough to communicate a need for help.

&#8220;The West African exchange officers were absolutely essential to the successful outcome of this episode,&#8221; Cmdr. Pete Pagano, the Carr&#8217;s commanding officer, said in the release. &#8220;Their ability to translate and provide cultural insight facilitated our assistance to the stranded fishermen and permitted the evolution to be smoothly executed.&#8221;