Sailors, Marines get taste of tea ceremony on Okinawa 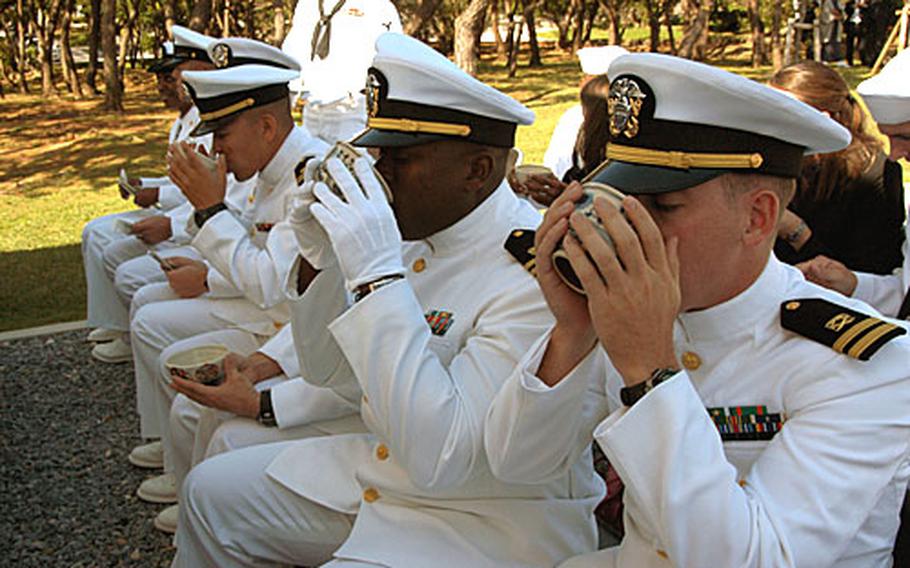 Genshitsu transfers water from a container to a tea-ceremony pot during the memorial service. (Will Morris / S&S)

ITOMAN, Okinawa &#8212; American sailors and Marines on Okinawa had a taste of a traditional Japanese tea ceremony Sunday by attending a Way of Tea ceremony to honor those who died in the Battle of Okinawa in World War II.

The event at the National Cemetery for the War Dead in Peace Prayer Park honored more than 200,000 people who died during the 83-day battle in 1945, including 12,500 Americans. It was led by Sen Genshitsu, Japan&#8217;s Great Grand Tea Master of the Urasenke Chado Tradition.

It was the ninth such ceremony hosted by Sen, the 15th generation heir of Sen Rikyu, who lived from 1522 to 1591 and perfected the Way of Tea to its present form, considered the quintessence of Japan&#8217;s spiritual culture.

The tea master, clad in a traditional kimono, was greeted by some 400 guests and tea disciples as he walked down a path leading to the cemetery. Standing on both sides and saluting were sailors from the U.S. Navy&#8217;s Commander, Fleet Activities Okinawa, and Japan&#8217;s Maritime Self-Defense Force in Naha. Music was played by the III Marine Expeditionary Force Band and the Ground Self-Defense Force First Combined Brigade Band.

Sunday was the first time U.S. and Japanese military members were invited to the annual ceremony.

&#8220;Peacefulness through a bowl of tea&#8221; is the lifelong slogan of Sen, 84, who was chosen for the Imperial Navy&#8217;s kamikaze suicide corps 63 years ago. He was trained in western Japan and assigned to Kagoshima, on the southern tip of mainland Japan, where kamikaze pilots before him departed for their one-way missions to attack the U.S. fleet in Okinawan waters.

He said he was pleased that servicemembers of both countries participated in this year&#8217;s ceremony.

As Japan&#8217;s great tea master and a United Nations goodwill ambassador, Sen has visited more than 60 countries, spreading his peace message through offering tea and its spirit.

His message was not lost on the people who attended Sunday&#8217;s ceremony.

&#8220;It was a great opportunity, and we really appreciate the invitation,&#8221; Master Chief Petty Officer Terry Woodcock said.

Both countries suffered during the war, and the Way of Tea was a chance to &#8220;recognize that we all lost, and it is good to remember the ultimate sacrifice,&#8221; he said.

&#8220;It is wonderful to promote peace through the spirit of the Way of Tea,&#8221; said Nobuhisa Yamaguchi, Commander of the 5th Maintenance Squadron of the Maritime Self-Defense Force in Naha. &#8220;What made the ceremony very significant was participation of U.S. military members.&#8221;