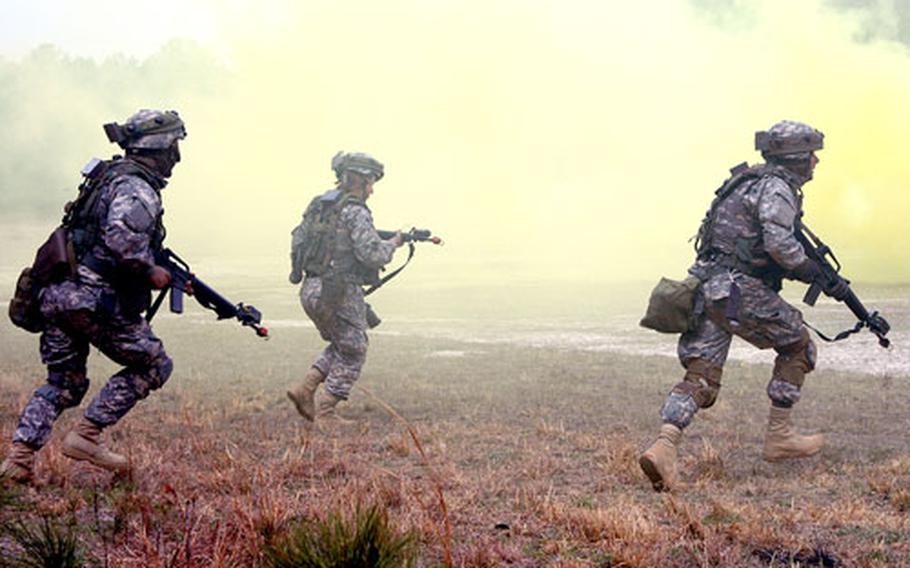 Sailors know the walk, when it&#8217;s from stem to stern. It&#8217;s the walking in formation that has some feeling like fish out of water.

Not until recently, that is.

With the Pentagon&#8217;s call on the Navy to provide forces to ease the strain on Army and Marine Corps ground units, naval individual augmentees are flocking to South Carolina to learn the basics of ground combat.

Snyder created a training program to accommodate as many as 600 students at once, though the largest class has been 215 students.

The Navy&#8217;s individual augmentees deploy downrange from, and return to, Fort Jackson, complete with necessary gear and proper uniforms, to include the Army&#8217;s new digital battle uniforms, if they are heading to Army units.

The Navy has been sending sailors to individual augmentation assignments since before the Sept. 11, 2001 attacks, but most jobs were filled by Seabees and SEALs.

But not until recently was there a cohesive training program for those called to work outside the scope of their traditional training. In December, some sailors received basic ground combat training at Fort Benning, Ga., while another group trained at Fort Bliss, Texas.

But wanting one centralized program, the Army tagged Fort Jackson as the individual augmentee and individual ready reserve training center, with the first group of Navy individual augmentees hitting the courses in January, said Lt. Susan Henson, a spokeswoman for the Naval Personnel Development Command, based in Norfolk, Va.

Some sailors &#8212; such as several Navy military dog handlers from Naval Support Activity Naples Italy &#8212; have deployed to Iraq with little or no training on how to survive in a ground combat zones.

One deployed in October 2004 to embed with the Army&#8217;s 1st Cavalry Division, and showed up not knowing how to properly to carry his rifle, according to information revealed during the sailor&#8217;s unrelated court-martial in February. For his normal job as a Navy cop, then-Petty Officer 1st Class Charles Flanning carried a sidearm, not an M-16.

Flanning is serving a nearly three-month jail term after a jury convicted him Feb. 10 of choking his wife in June 2005.

With 26 years in the Navy, Master Chief Petty Officer Billy Cronin put off retirement long enough to volunteer for an 18-month stint to make sure Navy individual augmentees coming in and going out of CENTCOM don&#8217;t fall through the cracks.

&#8220;We greet sailors arriving in theater, check to make sure they have all the proper equipment, send them to counter-IED (improvised explosive device) training and close quarters marksmanship training, then we send them to their &#8230; assigned locations,&#8221; said Cronin, the Naval Forces Central Command Detachment Kuwait command master chief.

&#8220;By the time they&#8217;re done [with training], they&#8217;re comfortable and proficient in combat skills,&#8221; he said in a phone interview from Baghdad, where he is helping set up a similar team who will track sailors in Iraq.