Sailors learn about tropical medicine during exercise in Africa 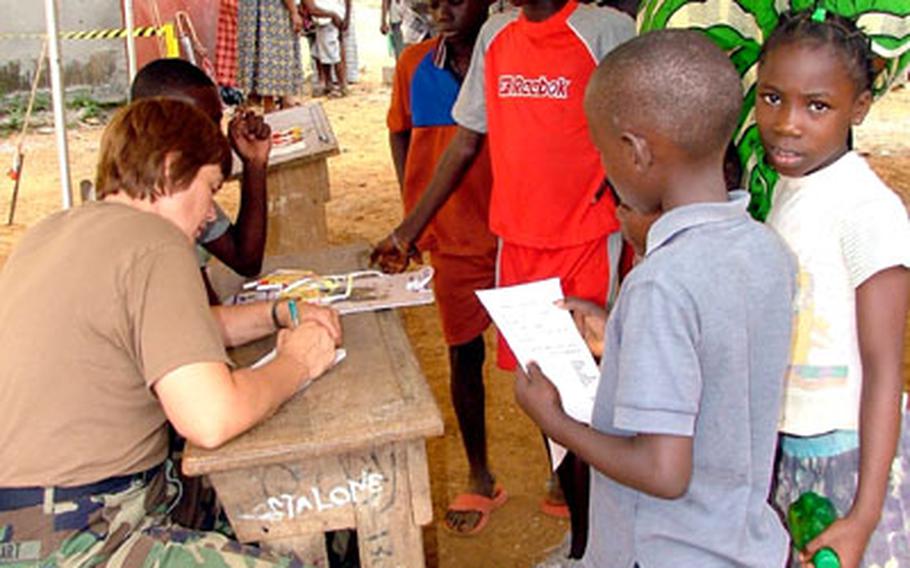 A U.S. Navy hospital corpsman works with a Gabonese interpreter to help patients in a village in the West African country of Gabon during a two-week humanitarian mission that ended Friday. Sailors in Gabon and Cameroon treated about 13,500 patients. (Tracie L. Cline / Courtesy of U.S. Navy)

&#8220;From the Gabonese, we learned about tropical medicine and even how they treat other diseases, such as emphysema or asthma, with different medications&#8221; not available in the United States, said Cmdr. Laurie Wesely, officer in charge of the Gabon mission.

However, while the information might prove useful one day, it won&#8217;t replace what the U.S. military currently uses. Medical experts in the impoverished nations of Cameroon and Gabon are accustomed to treating diseases such as malaria; and U.S. forces will remain steadfast in efforts to prevent troops from contracting such ailments, the mission commander, Navy Capt. Elisabeth Wolfe, said, citing use of prophylactic agents, bug repellents and protective clothing.

On Friday, about 110 reserve sailors from Operational Health Support Unit Great Lakes, Ill., who hail from around the United States, ended the two weeks of simultaneous medical exercises in Cameroon and Gabon as part of the West African Training Cruise Medical Outreach Program.

&#8220;The purpose is to promote stability in the region and strengthen relationships between the U.S. and African nations,&#8221; Wesely said, adding that it was her third such experience in as many years. She also has participated in exercises in Ghana and Senegal.

What could be visibly and immediately measured was the impact from the humanitarian aid that was provided, the women said in separate telephone interviews from the two countries.

In seven Gabonese villages, U.S. and Gabonese medical experts provided care to about 6,400 patients, some of whom suffered from malaria, leprosy, pulmonary infections, diarrhea, HIV and AIDS; while others needed teeth pulled or were fitted for eyeglasses, said Wesely, who works part time as both a nurse and a certified public accountant in Rhode Island.

The same happened in neighboring Cameroon, where about 7,000 people in eight villages were treated, Wolfe said.