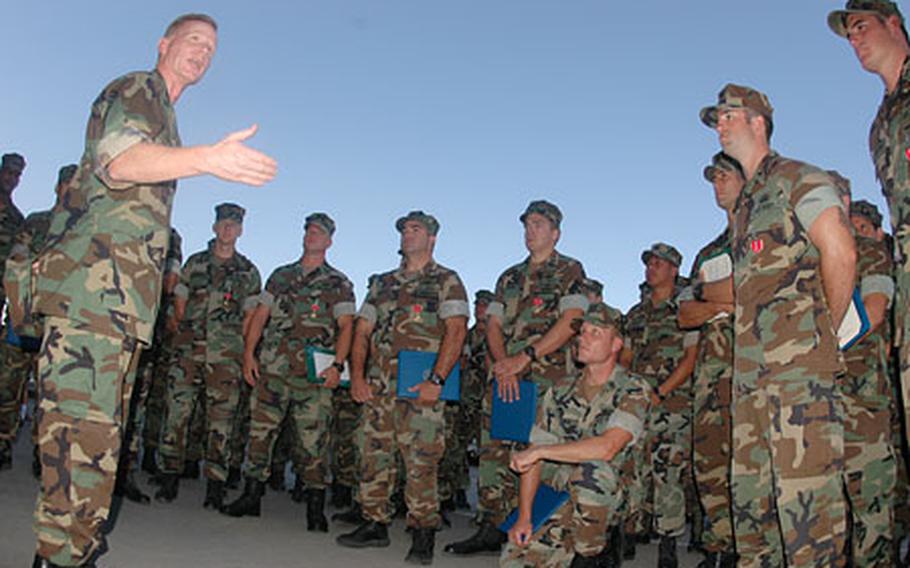 For nine months, missions took him and team members outside the safety of the wire, where they applied their expertise to hunt down and dismantle the roadside bombs that litter the war zone&#8217;s roadways.

&#8220;We were constantly with the Army, going out to fight, on route-clearing missions, cleaning roads of [improvised explosive devices] that were detractions to the convoy,&#8221; said Congdon, 24, with Explosive Ordnance Disposal Unit Eight, based out of NAS Sigonella.

The fact that he awarded so many to a single unit is indicative of the Navy&#8217;s increased importance and involvement in the nation&#8217;s war on terror, and the tremendous work accomplished by the sailors during their deployments, Leidig told the group.

&#8220;When you look at the number of missions these sailors did out there, 50 and 60 missions, involving anywhere from 50 to 100 [roadside bombs], these sailors are highly deserving of the Bronze Star,&#8221; Leidig said.

Von Gogh, 27, has deployed four times in his eight-year career.

Their training is a never-ending cycle, as the military tries to keep up with insurgents who are always trying to find more clever ways to hide roadside bombs, said Fleming, who was assigned with SEAL Team 3 during his six-month deployment to Iraq from April 2006 to October 2006.