Sailors get ready for Japanese roads 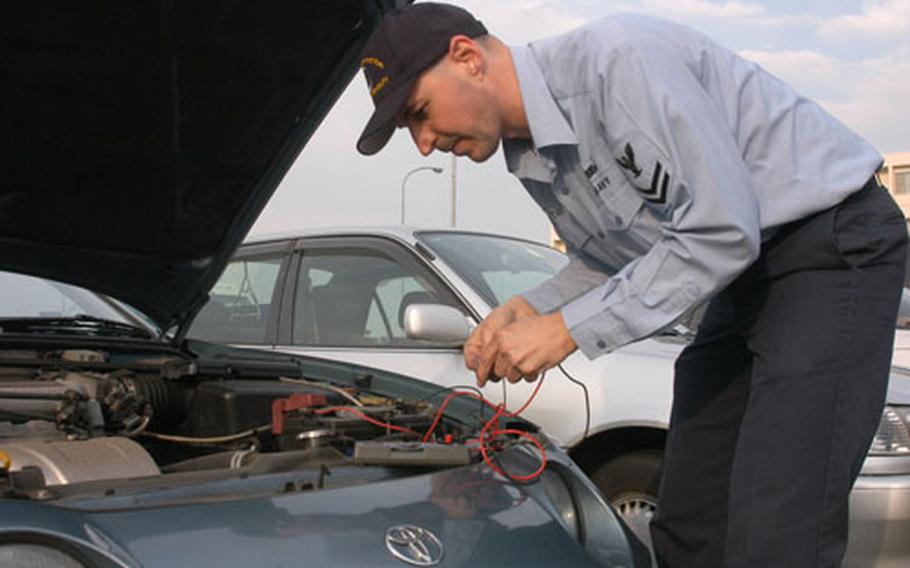 YOKOSUKA NAVAL BASE, Japan &#8212; As big as the aircraft carrier is, there are neither roads nor cars aboard the USS George Washington.

But there will be about 1,300 drivers-in-training as the ship sails to its new home in Yokosuka this summer.

Base Traffic Safety Office personnel will board the ship on the East Coast to prepare sailors for Far East driving, said Yokosuka Traffic Safety Supervisor Russell Tate in an e-mail to Stars and Stripes.

&#8220;This training will commence once the ship has left Norfolk on its transit to Japan,&#8221; Tate said.

About 900 sailors will already know the rules of the road &#8212; they will be cross-decking over from the USS Kitty Hawk &#8212; but sailors new to Japan will learn the Japanese traffic signs, laws and signals and take the written tests in a class similar to the one given on base every Friday, he said.

By the time the George Washington pulls into port, sailors should be ready to hit the road &#8212; once they pass the road t0est, Tate said.

Car ownership is another matter. Single E-4 and below sailors and their civilian equivalents are not allowed to own a car in Japan, and married E-4s need a command wavier to buy and register a vehicle.

Married and single E-5s and above can buy and register personal vehicles.

Tate estimates that all 1,300 sailors will have their licenses within two weeks of the ship&#8217;s arrival.

Drivers in 300 families will take the course on base as part of the regular newcomer orientation class, he said.

At Yokosuka, sailors, civilians and dependents with a valid U.S. license can get a Japanese driver&#8217;s license if they pass their examinations.

Petty Officer 2nd Class David Brown arrived to Japan just a few weeks ago and bought his first car for $300. His biggest challenge so far?

A heightened level of &#8220;situational awareness&#8221; also is needed to deal with &#8220;the far greater number of cars on the road, the sudden stops that occur constantly in traffic, the innumerable pedestrians and bicycles drivers you will encounter and the narrow (by U.S. standards) roads.&#8221; Tate said.

Lower speed limits and pedestrian rights-of-way also take some getting used to, but new drivers shouldn&#8217;t have much trouble, Tate said.

&#8220;Japan&#8217;s highway system, especially their national freeway system, is amongst the best in the world,&#8221; Tate said. &#8220;Americans should be confident that if they simply drive in accordance with the rules of courtesy and common sense they will have no difficulty on the highways of Japan.&#8221;

The pre-arrival driver&#8217;s training is nothing new, but it also has never been done on this scale, said base Chief Staff Officer Cmdr. Jon Lundquist.

The main thing is educating people on their new home as much as possible, he said.