Sailors get into rhythm of taiko with 'Drums of Fire' 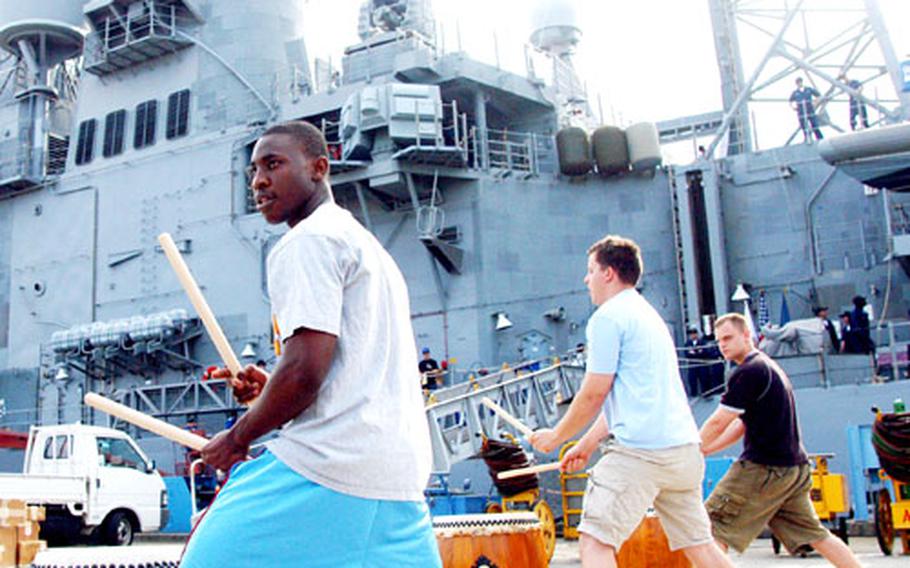 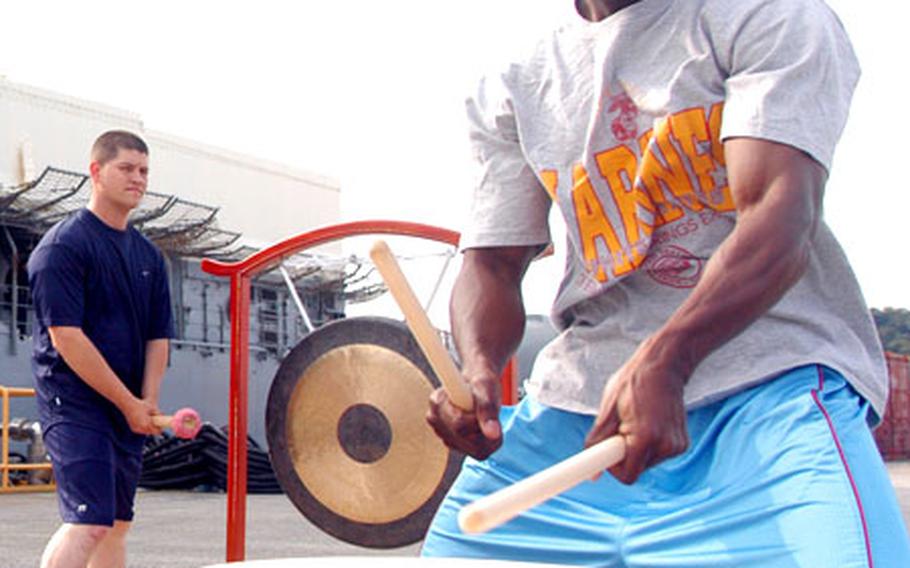 YOKOSUKA NAVAL BASE, Japan &#8212; Drums in Japan called troops to battle, drove vermin from rice paddies and communicated with the divine.

A U.S. Navy warship recently borrowed a distinctly Japanese drum style to forge friendships and show its &#8220;soft side&#8221; compared to its hard combat capability.

Now, four American sailors practice the intensely acrobatic and entertaining taiko aboard the USS Shiloh in &#8220;Drums of Fire.&#8221;

The band formed before the Shiloh arrived &#8212; its first gig was the guided missile cruiser&#8217;s highly publicized entrance to Yokosuka Naval Base. The publicity centered largely on the ship&#8217;s ballistic missile capabilities in the wake of missile testing in North Korea.

The fledgling taiko group also is winning international recognition as it plays during port visits and for visiting dignitaries, according to the Navy.

&#8220;The band plays at all under way replenishment details, community relations events, for dignitaries that visit ships and as needed,&#8221; said Ensign Victor Lofinmakin. His nickname is &#8220;Big Guns,&#8221; as taiko takes muscle.

Though Japanese have pounded drums for centuries, taiko didn&#8217;t emerge until 1951 with its hallmark of different-sized drums, choreography and visual appeal. The word &#8220;taiko&#8221; technically means &#8220;big fat drum&#8221; but it also refers to the distinctive drumming style.

Taiko is immensely popular in Japan, with more than 8,000 groups performing in the country, according to essortment.com. There are also many international performance groups, with several hundred in the U.S.

The Shiloh sailors had little to no experience when they started &#8220;Drums of Fire,&#8221; they said, but were taught on base by Tomohiko Inoue, Miki Ceselski and Kathy Korcal.

But he thought taiko might be a good way to take up time while the ship was under way, he said.

Lofinmakin said taiko was his way of getting more involved with Japanese culture while stationed here.

The group practices about twice a week and does &#8220;refreshers&#8221; before performances, and is about to increase its practice frequency, Lofinmakin said. The group also started with six members but lost two to rotations, which means recruiting, he said.