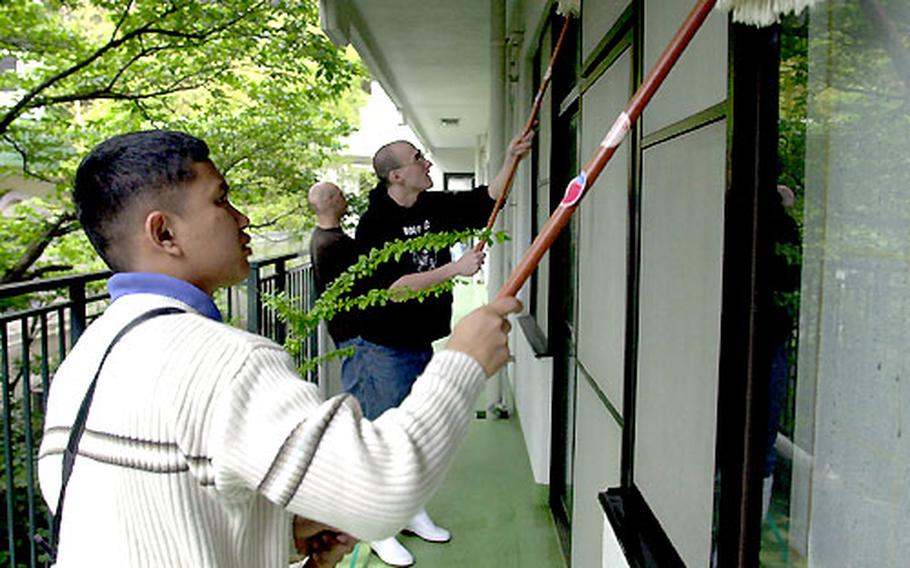 Sailors from the USS Carl Vinson clean the windows of a Yokosuka, Japan, nursing home as part of a community relations project Tuesday. Some sailors have been spending their port-call time helping others. (Joseph Giordono / S&S)

YOKOSUKA, Japan &#8212; Some headed directly to the bars; some headed for a theme park. Others volunteered their time at local schools and nursing homes.

No matter how the more than 6,000 sailors from the USS Carl Vinson battle group are spending their port call in Yokosuka this week, they all agree it&#8217;s better than being under way.

&#8220;This is better than being on the ship chipping paint,&#8221; said Airman Thomas Bardell, who was among two-dozen Vinson sailors participating in community relations events on Tuesday.

The Vinson, a nuclear-powered supercarrier that drew hundreds of Japanese protesters when it arrived Saturday, is anchored just off Yokosuka. The ship, from Bremerton, Wash., has been in the Western Pacific since February as a deterrent while USS Kitty Hawk was assigned to the Persian Gulf.

The USS Antietam and the USS Ingraham, with hundreds more sailors, are docked at Yokosuka. A major effort has been undertaken to provide crews with activities and directions to popular destinations.

In most cases, those efforts have paid off: This weekend, hundreds of sailors from the Vinson battle group packed nightlife districts such as Roppongi in Tokyo and the Honch in Yokosuka.

They also flocked to sponsored trips to Tokyo Disneyland and Yokohama; those sold out almost immediately.

One sailor, who is a mountain-biking enthusiast, carted his bike along when the ship deployed in January. He researched mountain bike trails in Japan when he found out the ship was stopping there.

As soon as the liberty boats pulled onto the base, he went to the Outdoor Recreation Department, which helped him and his friends find their way to the bike trails.

But some sailors said they have had a difficult time navigating the Japanese train system, even with the pamphlets and maps handed out by base officials.

&#8220;It&#8217;s kind of hard when you only have five days for a port call. One of those days you have duty, so that just leaves you with a couple of days to figure out everything you can,&#8221; said Petty Officer 3rd Class Jacob Bomba of the Vinson.

&#8220;It&#8217;s also hard if your friends have different liberty privileges because of their rank. Some of them will have to get back to the ship by midnight, so maybe you don&#8217;t have time to get up to Tokyo or something.&#8221;

&#8220;Guam was a lot easier. Even Korea was a little bit easier,&#8221; he said, referring to a short port visit the Vinson made to Pusan in March.