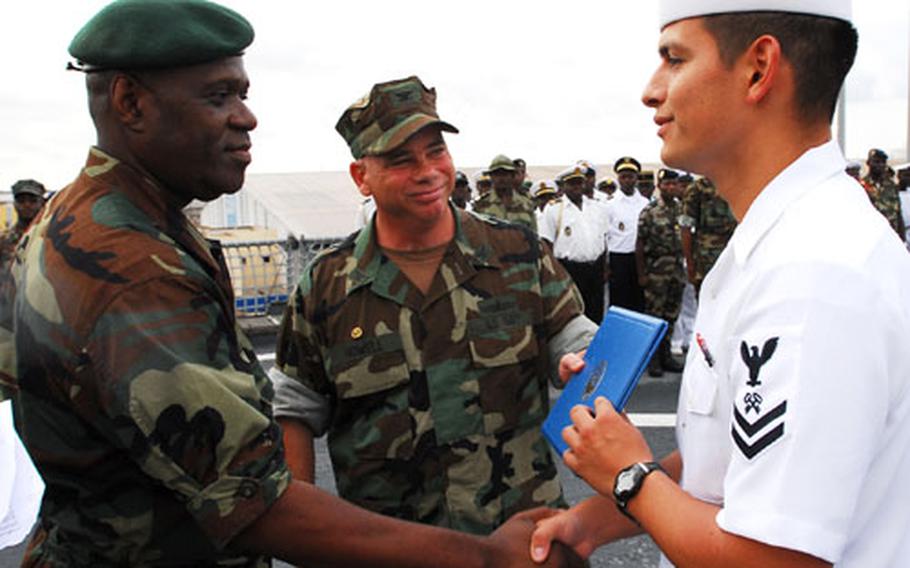 A U.S. sailor has been credited with helping save the life of a Gabonese woman who nearly drowned, according to Navy officials.

While taking a little rest and relaxation from his mission in the Gulf of Guinea, Petty Officer 2nd Class Ronald Saucedo, along with three other sailors, planned to spend some time Monday on Sogara Beach, near Port Gentile, Gabon.

The sailors saw four men carrying the body of a woman from the water and went to help, according to a Navy news release.

&#8220;I checked her pulse and airway. Then I tilted her head back and somebody volunteered to do mouth-to-mouth while I did chest compressions,&#8221; he said of the cardiopulmonary resuscitation process.

&#8220;Shortly after, the water gushed out of her nose and she came to. As soon as she started regaining consciousness, we made sure she was OK and then tried to get additional medical help.&#8221;

In spite of his training, Saucedo, a storekeeper stationed aboard the USS Fort McHenry, still described the experience as scary, according to the release: &#8220;I was afraid when I began chest compressions, but my training just kicked in.&#8221;

The Fort McHenry, which leads the Africa Partnership Station, deployed in November for a seven-month deployment to the Gulf of Guinea to train Western African navies in maritime security and how to secure their own coastlines and waterways.