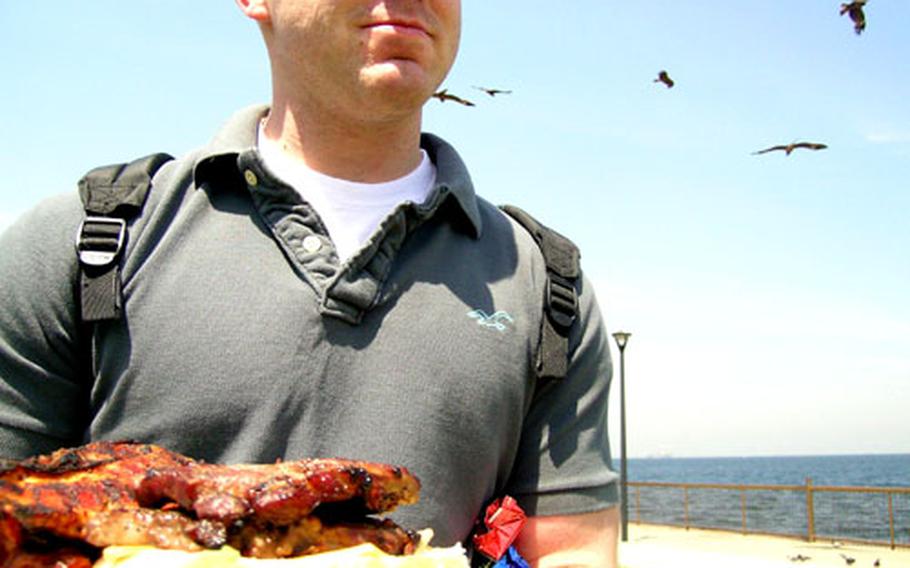 Kitty Hawk Seaman Ryan Malmstedt loads a plate with barbecue at the aircraft carrier’s command picnic/45th birthday Friday. Moments after the photo was taken, a seahawk swooped in for a burger. (Allison Batdorff / S&S)

The Kitty Hawk &#8212; the oldest ship in the U.S. Navy &#8212; is scheduled for decommissioning in 2008 and Hawley will be on its last crew. He was one of hundreds attending the Kitty Hawk&#8217;s command picnic and 45th birthday party at Yokosuka Naval Base on Friday.

The ship&#8217;s official birthday is Saturday, commemorating the day in 1961 when the 82,000-ton carrier was commissioned in the Philadelphia Naval Shipyard. The huge ship is often likened to a floating city, the sea-going home to a crew of almost 3,000, an 85-plane air wing with another 2,500 people, and with a 250-foot long flight deck, barber shops, post office and a hospital.

Older than most of its crew, Kitty Hawk requires some coddling, but she &#8220;always proves herself,&#8221; Master Chief Ashley B. Smith said.

The Kitty Hawk supported several military actions since 1961, including those in Vietnam, Iran, Somalia and Iraq. The Kitty Hawk came to Japan in 1998 to replace the USS Independence and take its title as the only carrier forward-deployed to another country.

The Kitty Hawk is scheduled for decommissioning in 2008. The nuclear-powered USS George Washington will replace it at Yokosuka. How much crew will be swapped over remains to be seen, McNamee said.

The carrier&#8217;s fate also is unknown. The decommissioning of the USS John F. Kennedy &#8212; the Navy&#8217;s only other conventionally powered carrier &#8212; is being watched very carefully, McNamee said.

A group in Wilmington, N.C., wants to turn the Kitty Hawk into a tourist destination/convention center. Five other former aircraft carriers (including the USS Midway) currently serve stateside as museum attractions.

But the &#8220;final resting place&#8221; for the Kitty Hawk is undecided, McNamee said. Since 2008 is two years off, about the only thing set in stone is the plan to keep working, he said.