Sailors catch up with new additions Navy Dental Assistant Rama Germilus, 23, left, beams after stepping off a bus that ferried she and roughly 400 others who had been stationed on the USNS Comfort home from deployments. Her boyfriend, Dental Technician Rendall Latin, 23, was waiting with roses and open arms. Both work at the National Naval Medical Center in Bethesda, Md. (Sandra Jontz / S&S)

Navy Dental Assistant Rama Germilus, 23, left, beams after stepping off a bus that ferried she and roughly 400 others who had been stationed on the USNS Comfort home from deployments. Her boyfriend, Dental Technician Rendall Latin, 23, was waiting with roses and open arms. Both work at the National Naval Medical Center in Bethesda, Md. (Sandra Jontz / S&S) 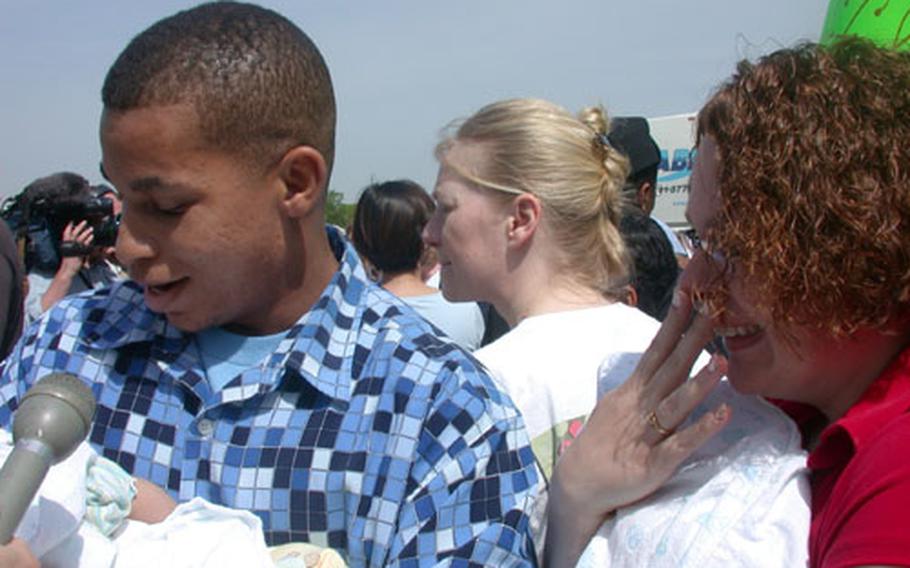 Petty Officer 3rd Class David Cargo, 25, holds his son Xavier for the very first time during a homecoming celebration held at the National Naval Medical Center in Bethesda, Md., while his fiancée, Felicia Plunkett, looks on and chokes back tears as she watches him watching their son. Felicia holds the couple&#39;s other son, twin brother Elisah. Both boys are 2 months old and was born while Cargo was serving in the Persian Gulf as a cook on the USNS Comfort hospital ship. (Sandra Jontz / S&S) BETHESDA, Md. &#8212; Going from sea duty to diaper duty, Petty Officer 3rd Class David Cargo said he&#8217;s got a lot to learn about the new job in store for him.

Wednesday, when Cargo, 25, stepped off the bus that ferried him home on the final leg of a voyage from the Persian Gulf to Bethesda, Md., he was greeted by two people he&#8217;d never met before.

In January, Cargo, a cook in the Navy for five years, halfheartedly left his home and pregnant fianc&#233;e to head out on the hospital ship USNS Comfort.

&#8220;I&#8217;d been there for every appointment, for the morning sickness and for the cravings of cheese sticks and chicken tenders. Then, at the 11th hour, I missed out on the most important part of all,&#8221; Cargo said.

But Wednesday, as he watched Xavier sleep in his arms amid the hubbub of homecoming cheers, he understood why.

About 480 of the ship&#8217;s staffers arrived home Wednesday after treating more than 600 patients aboard the floating hospital, which will remain in the Arabian Gulf with a staff of about 600 to continue caring for the remaining 100 inpatients, of which all but six are Iraqi civilians and enemy prisoners of war injured in the recent warring.

Remaining onboard are 40 physicians, 90 nurses and more than 300 hospital corpsmen &#8212; not to mention the support and supply staff.

The four youngsters, ages 6, 7, 9 and 10, gathered just before noon at the National Naval Medical Center to greet their dad when he got off the bus that carried the homecoming group from Baltimore-Washington International Airport.

Mom Kristin Niemann has been keeping busy in her husband&#8217;s 56-day absence. She sold their Germantown, Md., house and bought another in Charleston, S.C., for when the Navy family moves in June.

More than 590 surgeries took place on the high-tech, 1,000-bed floating hospital, some of then attended by Navy Hospital Nurse Rashonda Alexander.

But that was all behind her as the young mother focused on a new sight &#8212; her 6-month-old son Jaylin Pitts, whom she had not seen in two months.