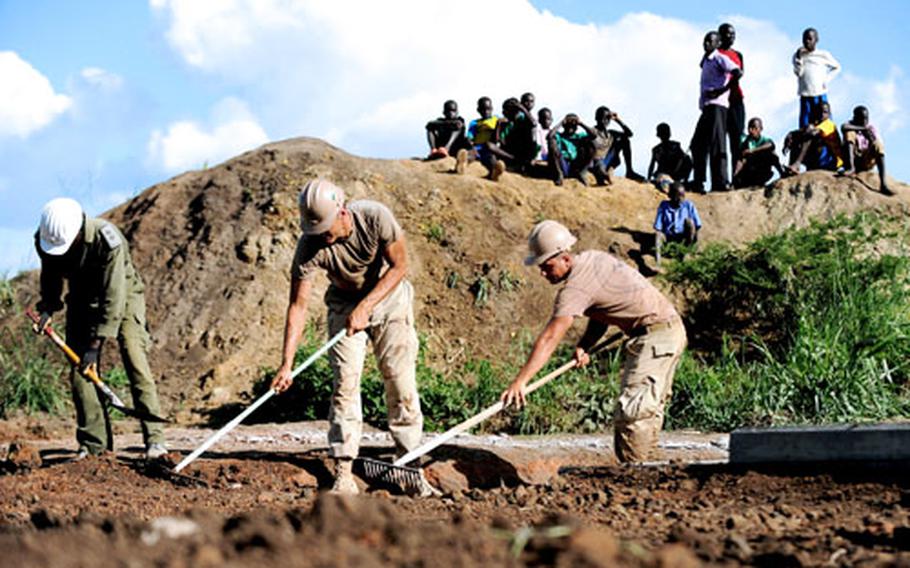 Residents of Aroma, Uganda, look on as Seabees from the U.S. Naval Mobile Construction Battalion-11, Combined Joint Task Force-Horn of Africa, grade the area surrounding a bridge under construction. The Navy has changed its advancement system to ensure all sailors have an equal shot at promotion, and are not disadvantaged by tours of duty downrange. (Dawn Price / Photo courtesy of CJTF-HOA)

The Navy has changed its advancement system to ensure all sailors have an equal shot at promotion and are not disadvantaged by tours of duty downrange.

The changes are meant to correct a system in which sailors who performed exceptionally well at their home stations did not earn award points while downrange. Now, sailors who have maxed out their award points will be able to apply the additional points earned downrange toward promotions, officials said. Points are awarded for, among other things, commendation medals and citations.

"Recently, we were presented with situations in which sailors who already received the maximum award points &#8230; were maxed out and wouldn&#8217;t get the two points for being in theater," said Capt. Eugene Jones, branch head for Enlisted Force Shaping Plans and Policies in Washington, D.C. "This allows those in theater not to be excluded.

"This is huge. Any time you can give something to those who are putting their lives on the line on a daily basis &#8230; it&#8217;s important," said Petty Officer 1st Class John Parker, 34, who spent three, seven-month tours in Iraq. "They deserve any kind of benefit they can get because of the situation they&#8217;re in."

The award points are but one portion of a sailor&#8217;s overall package for advancement. Other factors include test results and performance evaluations.

The changes, highlighted in a May message to troops, come on the heels of other efforts to ensure that deployed sailors are not disadvantaged in relation to their peers. The Navy made changes to its advancement program in 2005 following a study by the Center For Naval Analysis that reported sailors in Individual Augmentee status &#8212; instances when one sailor deploys, as opposed to having an entire unit deploy &#8212; were less likely to advance than their nondeployed peers.

Other changes include the 2005 creation of the Combat Meritorious Advancement Program, which allows commanders to automatically promote junior enlisted sailors if they performed with uncommon valor while deployed; reduced the required number of consecutive days served from 179 to 90 in order to take advantage of changes; and waived the advancement exam for petty officers first class vying for chief.

Sailors who served in Bahrain out-advanced their peers Navywide

"It&#8217;s got a little to do with the area, which is very conducive for studying," said Chief Petty Officer Thomas Butler Jr., the fleet force career counselor in Bahrain. A majority of the sailors serve on one-year, unaccompanied tours. "They are away from families and therefore not coming home to the &#8216;honey-do&#8217; lists or something to that effect."

Sailors in the intelligence specialist rating &#8212; the Navy term for job &#8212; did better than most, Butler said. "They&#8217;re working in their rate, using high-technology equipment, and they&#8217;re doing it every day," he said.