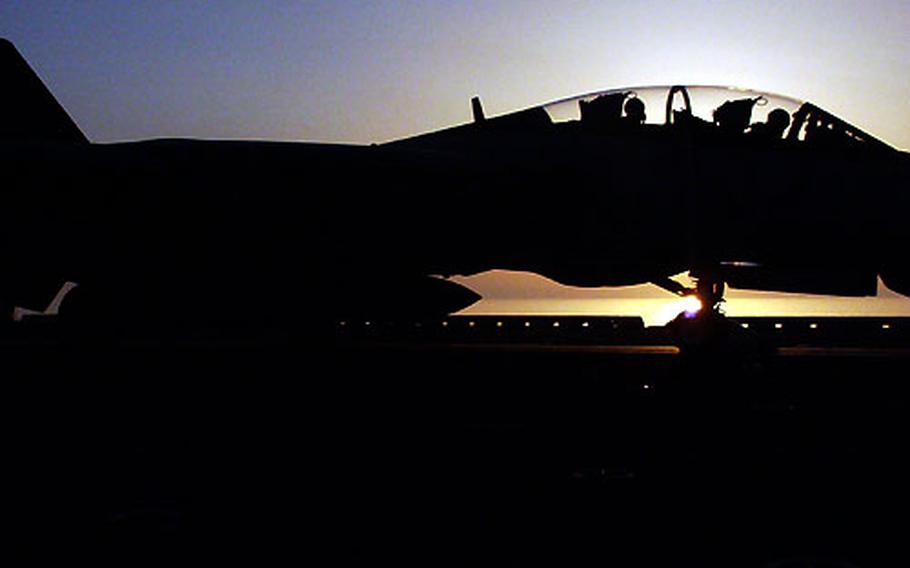 An F-14 Tomcat takes off from the USS Kitty Hawk as the sun sets over the Persian Gulf on Tuesday. (Kendra Helmer/Stars and Stripes)

ABOARD THE USS KITTY HAWK — Lt. j.g. Tom Lunsford returned from his first mission dropping bombs on Iraq to a roomful of sailors Wednesday evening.

On the ready room board was a caricature of the newest pilot of the Black Knights’ F-14 Tomcat squadron.

“They drew a picture of an old man, all salty. Everyone was saying, ‘Hey, he’s my war hero,’ “ said Lt. Cmdr. Jerry Morick, 37, who flew with Lunsford as his radar intercept operator.

Wednesday was the first time this deployment that fighter jets embarked on the USS Kitty Hawk dropped ordnance on Iraqi targets. Though the war with Iraq began the following morning with missile strikes, U.S. military officials called the fighter strikes part of the ongoing Operation Southern Watch, during which pilots enforce the no-fly zone over southern Iraq.

The Black Knights pilots of Fighter Squadron 154 headed to their planes Wednesday for what they thought were normal missions. 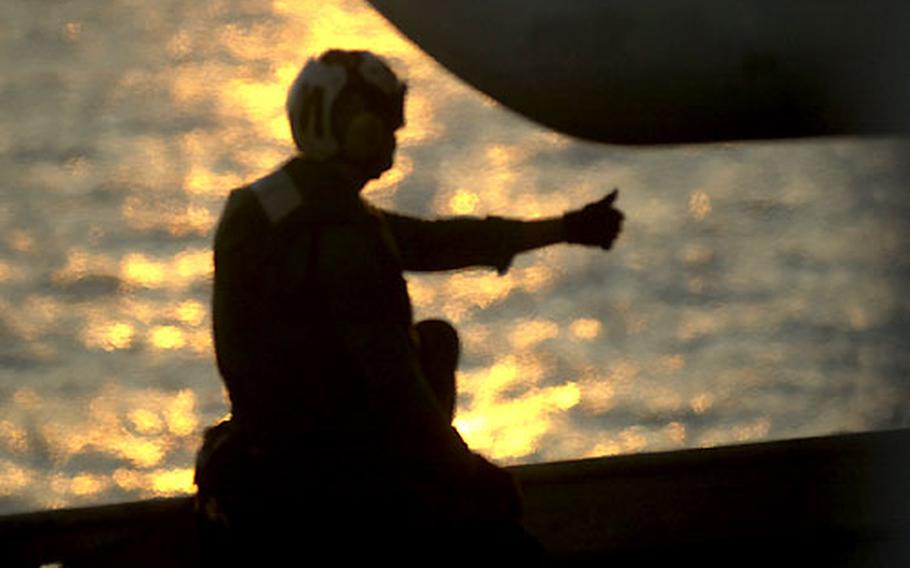 An aircrew member gives a thumbs-up during flight operations at sunset Monday on the Kitty Hawk. (Kendra Helmer/Stars and Stripes)

Then, “Just before we walked, we got passed new targets,” Morick said.

Lunsford, 26, said the mission didn’t feel much different than others.

“I was thinking nothing’s different, I’m gonna do this like every other time I’ve flown over Iraq,” he said.

“All we hit was pretty much equipment,” he said. “It would’ve felt different had we seen personnel. It was so antiseptic up there.”

As the sun set over hazy skies and dust swirled on the ground below, Morick said that he was nervous for Lunsford.

“ was very impressed by how cool he was,” Morick said.

Other sailors ribbed Morick and the new guy for a good four hours after they returned at 6:30 p.m., eager to hear the details of the squadron’s first strikes.

Lt. Cmdr. Bill Koyama, 38, a Hornet pilot with the Golden Dragons, didn&#8217;t return from his mission until after midnight.

“I just need a little rest,” he said Thursday morning. “The ball is really rolling. We won’t be having any days off for a while.”