Sailor wins again at Japan’s grueling Iron Dog competition, which Navy says is like CrossFit for handlers and canines 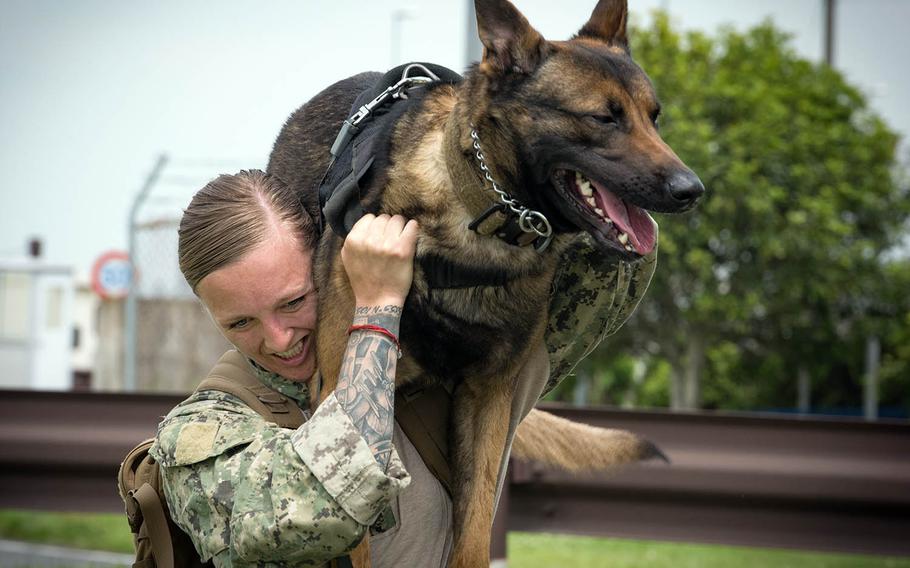 Petty Officer 1st Class Ashly Lester and her dog, Ttibor, won a competition over 17 other working-dog teams from across all services in the U.S. military and the Japan Self-Defense Forces in Tokyo. (Juan Torres/U.S. Air Force)

YOKOSUKA NAVAL BASE, Japan — A Yokosuka master-at-arms has won U.S. Forces Japan’s Iron Dog competition for the second year in a row.

Petty Officer 1st Class Ashly Lester and her dog, Ttibor, recently competed against 17 other working-dog teams from across all services in the U.S. military and Japan Self-Defense Forces, the Navy announced Friday.

The service described the May 17 challenge at Yokota Air Base in western Tokyo as a series of “grueling tasks that to outsiders may seem more akin to a CrossFit competition or Ironman race.”

Canine competitors sniffed for explosive odors over three floors of a tower, extracted suspects from cars and ignored distractions like gunfire to complete handlers’ commands. Handlers completed physical tasks, including dragging 200-pound mannequins 50 meters and carrying their more than 80-pound dogs up eight flights of stairs.

The handlers’ veterinary skills were also tested through pretend situations such as helping a dog with an open chest wound or one that’s in shock. Lester said these skills translate directly to the battlefield.

“We are trained in basic veterinary skills so that if we were down range on a mission and something goes wrong, we’re not just sitting there asking ‘What do I do?’” she said in the Navy release. “We can at least do something [to help] until we can get the dog emergency care.”

Though it was the second year in a row that Lester took home the win, it was the first year for young Ttibor to compete. Lester used a different dog last year, but said she was impressed by how well the 2-year-old brown and blonde dog performed.

“He was doing things he hadn’t done before and he was doing them fluidly,” she said, according to the Navy. “I was just so happy with him.”

“Lester took the right ingredients for success: hard work, patience, perseverance and the fighting spirit of the Navy,” he said. “I know this achievement will inspire those around her.”

Lester said competitions such as Iron Dog pushes handlers and their dogs toward excellence.

“I know every rate says this about the Navy, that they have the best job, but I really love this job,” she said in the release. “I think most of us that are in this program have the personality where we want to compete and we want our dog to be the best. And that’s just a good group of people to be around because you’re always pushing one another in some facet to be better.”