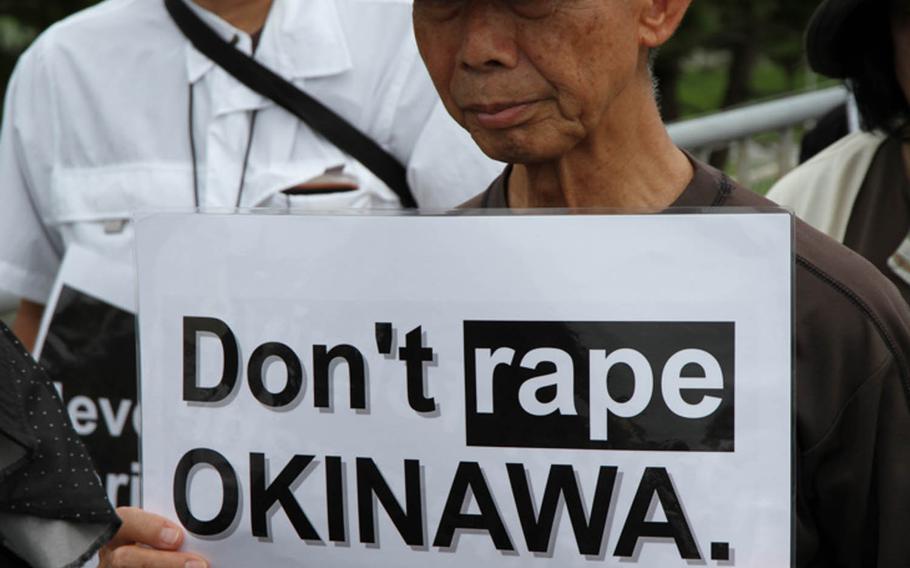 Buy Photo
Approximately 2,000 protesters rallied in front of the gate at Marine Corps headquarters on Camp Foster Sunday, May 22, 2016, to protest the U.S. military presence in Okinawa after a former U.S. Marine who worked as a civilian on Kadena Air Base confessed to the brutal slaying of a 20-year-old local girl. (Matthew M. Burke/Stars and Stripes)

CAMP FOSTER, Okinawa — A U.S. sailor must serve 2½ years of hard labor for raping an intoxicated Japanese woman at a Naha hotel, an incident that sparked anti-base protests and contributed to tightened liberty restrictions on Okinawa.

Seaman Apprentice Justin Castellanos, 24, was sentenced Friday by a three-judge Naha District Court panel. His family was required to pay $21,789 in restitution to the victim, in addition to $2,842 from the U.S. military. Both amounts have been paid, officials said.

Prosecutors had sought a four-year prison term, but the chief judge said a lower sentence was accepted for the corpsman, who is assigned to Camp Schwab, because he had pleaded guilty and shown remorse for his actions.

Judges also said the woman was partly to blame for becoming incapacitated and passing out in the hallway by the sailor’s room.

“I am sorry for what I have done,” Castellanos said June 27 during closing arguments. “My heart is filled with regret.”

He also said his required sex offender registration was a stain he would forever have to work to overcome.

Castellanos’ attorney said his client does not plan to appeal the decision.

Castellanos pleaded guilty May 27 to finding the female tourist from Fukuoka passed out in the hallway of the hotel where he was staying. He took her into his room and raped her. When she woke up and found a stranger next to her in bed, she cried out for help, which awoke her date in a nearby room.

Castellanos left the room with his belongings to seek help from a friend but returned to the hotel, where he was arrested. The victim’s DNA was detected on his body.

The incident sparked anti-base protests and contributed to tightened liberty restrictions for servicemembers on the tiny southern Japanese island. It set the stage for tensions to erupt when the alleged murder of a 20-year-old local woman by a civilian worker from Kadena Air Base came to light two months later.

Crimes committed by American troops on Okinawa have typically been a sensitive issue with the island’s million or so residents. Locals have long complained that servicemembers have been shielded from justice by the status of forces agreement.

A high-profile 1995 incident where servicemembers abducted and raped a 12-year-old girl led to plans to relocate Marine Corps Air Station Futenma to the island’s remote north. The rape of a local woman by two sailors in October 2012 further enflamed tensions.

Castellanos will serve his sentence at Yokosuka Prison in Yokosuka, Japan, where other convicted U.S. military personnel are incarcerated.