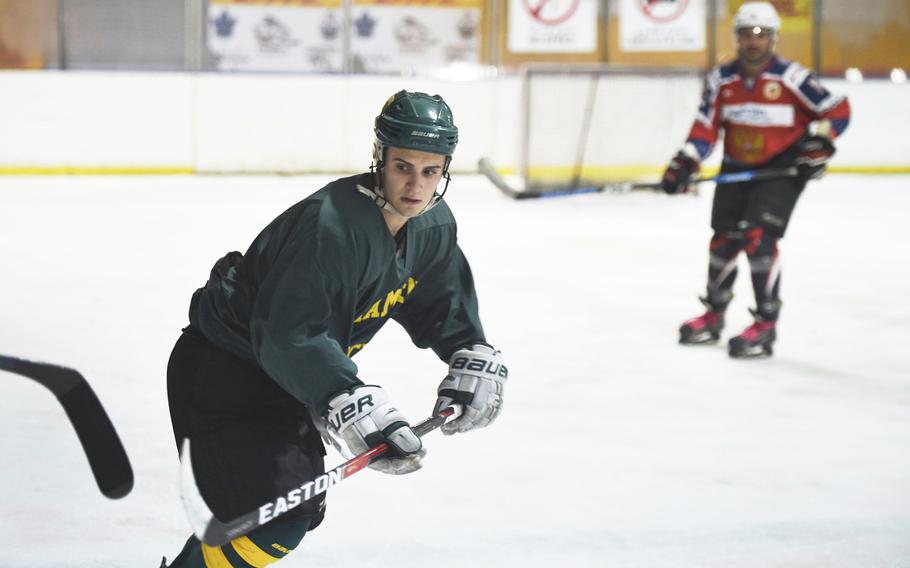 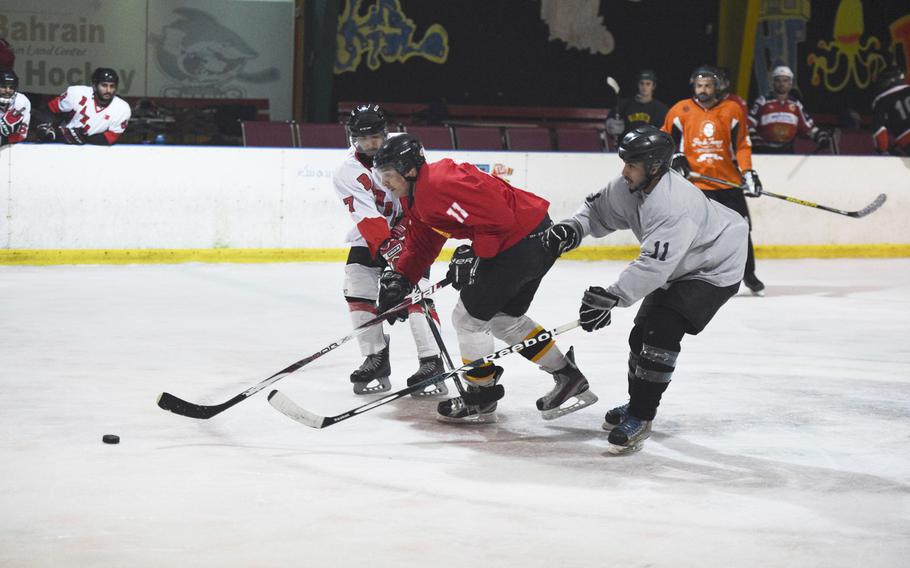 Hockey action at the Funland Centre in Manama, Bahrain, April 10, 2018. Bahraini locals, servicemembers and others meet twice a week for practice and games. (Jason Behnke/Stars and Stripes) 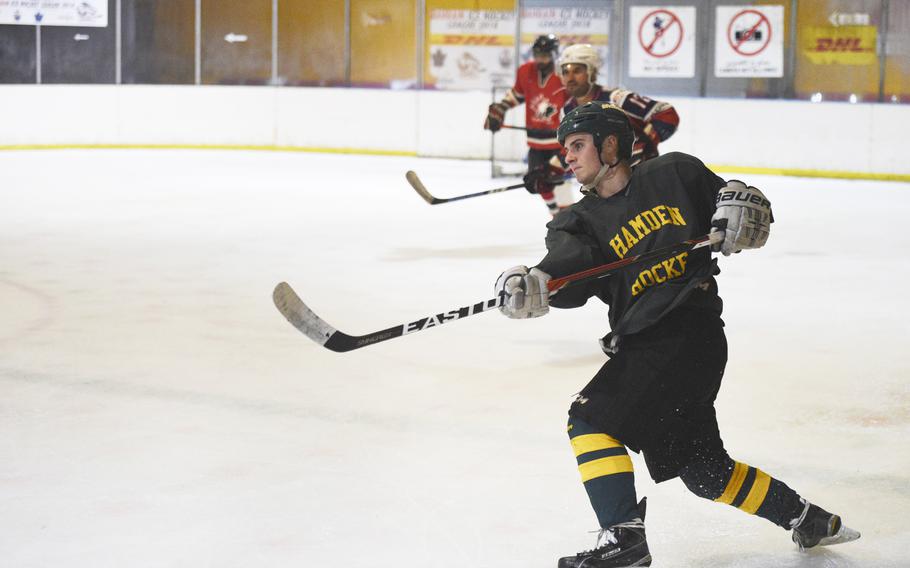 The Hamden, Conn., native was sure of it when the Navy sent him to the desert kingdom of Bahrain.

“When I got here last May it was 110 degrees, and I didn’t think there was a chance I’d be playing hockey anytime soon,” said Greco, 20, a master-at-arms. “And then I was at breakfast with some friends, and they said there was a hockey league out here. I didn’t believe them.”

He found the only ice rink in Bahrain was only a couple of miles from base. Twice a week, about a dozen or so people arrive at the Funland Centre in their various jerseys.

Some wear the red and yellow jerseys of DHL, the sponsor of the hockey league in Bahrain. Others wear the colors of their favorite NHL team. On Tuesday night, Greco hit the ice, dressed in the green jersey of the Hamden Green Dragons, which Greco said has won the most high school championships for a public school in Connecticut.

Joining the scrimmage were other sailors, Bahrain locals and Saudi Arabians who crossed the 16-mile bridge from their country. They swapped in and out. The night was about having fun; no one was really keeping score.

“We play three-on-three because the rink is really small,” he said. “It’s nowhere near the size of a regulation rink. But all we need is a sheet of ice to play.”

Greco’s interest in hockey had waned as he focused on boot camp and then his job training. But when Greco heard there was a hockey league, he immediately called his father and had his equipment shipped.

The small league of four teams that competes in Bahrain was established in 2014 by a Bahraini employee from the nearby U.S. Navy base. Greco plays for the Riffa Maple Leafs. Although the official season lasts only four months and ends in April, there are other tournaments throughout the year, including a popular one during Ramadan next month.

There are a fair number of passionate fans here, Greco said. During this scrimmage, however, only a few people quietly observed from the sidelines. It’s a far cry from the bleachers full of screaming parents and fans he played in front of just a couple of years ago, but he’s just happy to be playing again.

Hockey is still a novelty in the Middle East. While there are many pristine soccer fields and racetracks that cost hundreds of millions of dollars, Greco plays his sport of choice at an ice rink where, in the same building, you can bowl and play arcade games.

Still, Greco thinks the sport will continue to grow in the region. With leagues in nearby countries such as the United Arab Emirates and Qatar, he might be right. Even in this small venue in Bahrain, he sees interest growing.

“A lot of people come and skate here and a lot stay and watch the hockey games, so I think this sport can grow and succeed in the Middle East,” Greco said.

Either way, he’s found a renewed passion for his childhood sport — and a new group of friends to share it with.