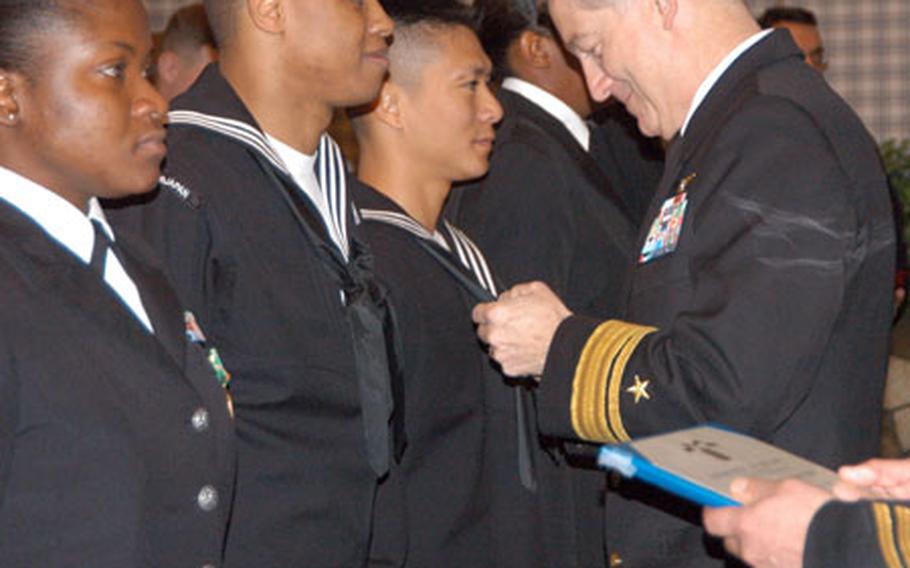 YOKOSUKA NAVAL BASE, Japan &#8212; Eight sailors stood at attention before their admiral &#8212; each in dress blues, squared away in finest Navy fashion.

Each had been selected as candidates for 2006 CNFJ Sailor of the Year for their respective units. On Thursday, Petty Officer 1st Class Thomas Aiello, an operations specialist from Atsugi, stood a little taller after Kelly awarded him the 2006 CNFJ Sailor of Year.

However, being one of the final eight does come with a few fringe benefits, not the least of which is a chance to take a trip to Yokosuka and spend a few days schmoozing with regional admirals and master chiefs. Flying from locations as remote as Diego Garcia, each sailor was treated to a three-day program that included a Japanese cultural tour and several dinners and luncheons.

But among the incidentals noted by several unit SOYs, one stood out as the most coveted &#8212; a parking spot.

&#8220;We all were awarded Navy Achievement Medals &#8230;&#8221; said Petty Officer 1st Class Keith Jones, a yeoman and Sailor of the Year for DNFJ staff. &#8220;But around the CNFJ compound parking is scarce, so I definitely will enjoy having a parking spot for the rest of the year.&#8221;

Another notable &#8220;perk&#8221; is not having to stand watch, what many sailors consider to be the bane of a Navy career.

One command in particular, Naval Air Facility Atsugi, seemed to stand out for the generosity it displayed to its recipient. Aside from free room and board at Yokosuka, it awarded 30 days of duty-free status, a parking spot, a $50 gift certificate and a $100 savings bond.

Add to that displays and words of gratitude at award ceremonies, CNFJ also presented all of the finalists with six-months of free cable television service and a coupon for a stay at the New Sanno Hotel in Tokyo.