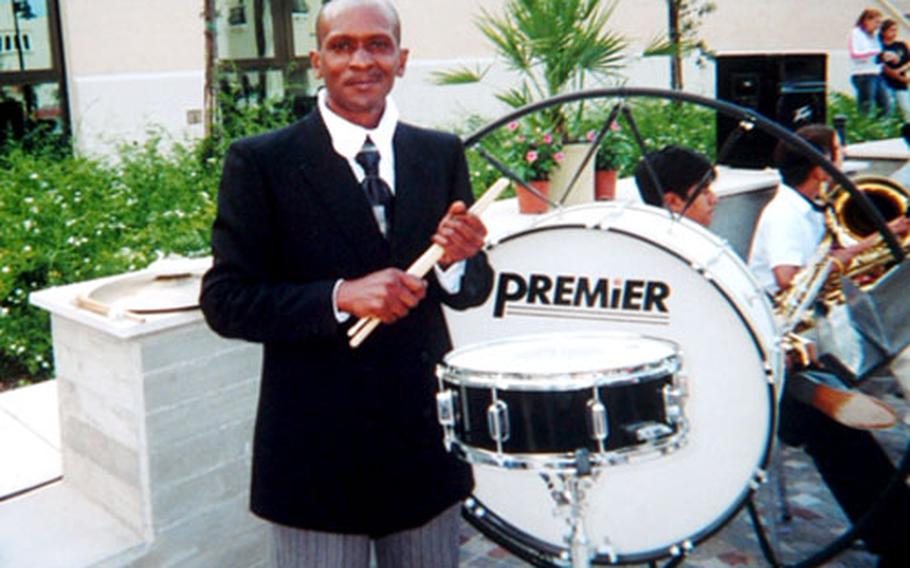 SIGONELLA, Sicily &#8212; Petty Officer 1st Class Gregory Sampson of Naval Air Station Sigonella, Sicily&#8217;s Naval Computer and Telecommunications Station may work with computers for a living, but he&#8217;s got music in his heart.

The 42-year-old has spent the past three years volunteering to teach various percussion instruments to band members at Stephen Decatur High School.

Sampson started playing music in 6th grade and continued through college, where he earned a bachelor&#8217;s degree in music from Huston-Tillotson College in Austin, Texas.

Shortly after receiving his degree Sampson enlisted in the Navy, not as a musician but as a radioman. He continued to play music, however, while off-duty. He played in clubs and churches, sometimes twice a week.

When he arrived in Sigonella almost three years ago, Sampson wanted to take his knowledge and love for percussion instruments and pass on those skills to a new generation of musicians.

&#8220;I knew I had talent and training and I wanted to pass it on to these guys,&#8221; he said about the band percussion section, which totaled five musicians this past year.

Sampson took the &#8220;guys&#8221; for special sessions focusing on percussion instruments and their roles both as part of a band and part of a standalone drum corps. Giving the student percussionists the individual attention, said Minning, really helped both the section and the band as a whole.

Sampson first assessed the students&#8217; playing levels, then worked one-on-one with some of them.

Once he felt the students were performing at similar levels, Sampson turned his attention to their playing skills as a section.

Sampson also worked to give the section its own identity, not just that of being part of the larger school band.

Sampson took the percussion section from the background and at times put them in the forefront of some performances, such as at pep rallies and football games.

The percussion section&#8217;s last performance at school was for the recent high school graduation. It was also the last time Sampson guided them. He&#8217;ll be transferring to Norfolk, Va., before the new school year begins.

He said he&#8217;ll still play music during his two-year stint in Norfolk.

And after those two years and he retires from the Navy, will he finally choose a career in music?

The father of three, who will then have two college-age kids, doesn&#8217;t think so.

For although money pays the bills, music, it seems, keeps Sampson&#8217;s heart on a steady beat.