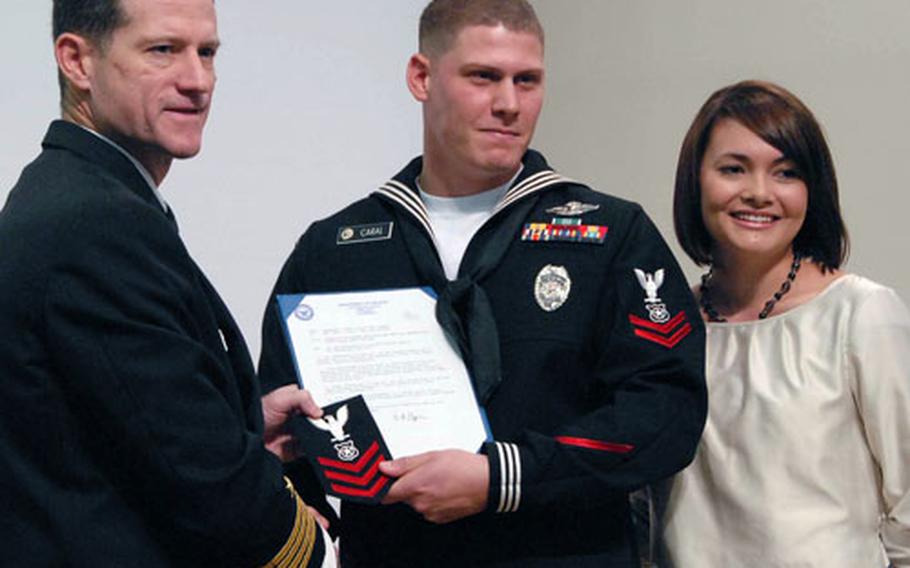 Petty Officer 1st Class John C. Caral is accompanied by his wife, Heather, while being awarded a meritorious advancement Tuesday by Sasebo Naval Base commander Capt. Tilghman Payne. Caral was promoted to petty officer first class for extraordinary combat service in Iraq during his deployment in 2006-2007. (Travis J. Tritten / S&S)

The Navy awarded Caral a rare meritorious advancement for extraordinary combat service in the Middle East, which immediately elevated him from a second class to a first class petty officer.

The praise was hard-won and laced with the tragedy and danger of war.

Caral, a master-at-arms, spent his 2006-07 deployment in Iraq searching for enemy weapons and improvised explosives with his bomb-sniffing dog, Baro.

During their time in Iraq, Caral and Baro found a weapons cache and twice discovered improvised explosive devices, according to the Navy.

In March, his convoy was struck by an IED. Caral gave first aid to an injured soldier until medical help arrived and also helped rescue another soldier from the blast wreckage, the Navy said.

Caral &#8220;demonstrated exceptional leadership and technical expertise in combat situations and is most deserving of this meritorious advancement&#8221; for his service in Iraq, Sasebo Naval Base commander Capt. Tilghman Payne said Monday. &#8220;He did a tremendous job over there in Iraq.&#8221;

The Navy created the Combat Meritorious Advancement Program in 2005 to give commanders the ability to advance junior enlisted sailors who display uncommon valor and extraordinary leadership while engaged in or directly supporting combat operations.

But don&#8217;t expect to hear much from Caral about his extraordinary service.

The soft-spoken sailor and his dog now work security at Sasebo Naval Base.

Caral said he was surprised with the rank promotion Tuesday during an awards ceremony at the base.

Base officials kept the meritorious advancement a secret until Caral approached the stage Tuesday morning and was pinned by Payne.

Caral said he&#8217;d prefer not to talk about that day in March when the bomb exploded on his convoy.

&#8220;I was out there to find what they use against us explosive-wise and just help out the troops in any way possible and save a couple lives,&#8221; Caral said.

Caral&#8217;s wife said her husband has always been goal-oriented and humble.

Nominations must be submitted to commands within a year of the meritorious action or performance in combat.

Here are some situations that may warrant consideration for a meritorious advancement, according to the Navy:

Ground action or operations against an armed opponent.Offensive or defensive engagements against hostile seaborne watercraft, including members directly involved in search-and-seizure operations as part of a boarding party or defense of an offshore oil facility.Ordnance clearing, removal or render-safe operations.Anti-terrorism and force-protection missions where armed engagement with an opposing force occurs.&#8212; From staff reports