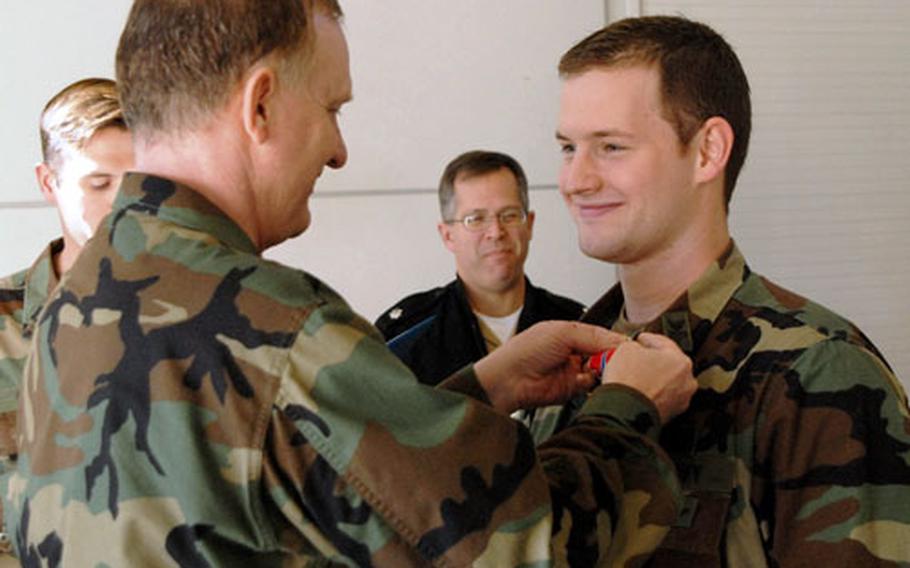 The 24-year-old sailor, now stationed in Rota, Spain, received the honors for two stints in Iraq as an explosive ordnance disposal technician &#8212; one for his work in defusing many bombs and threats, and the second for his active involvement in the capture of multiple enemy combatants, he said.

Navy Capt. James "Red" Smith said this is the first time that he has presented a sailor with a second Bronze Star or been present for such an honor since the start of the conflict in Iraq in 2003.

Smith, who awarded Miller his second Bronze Star last month during a ceremony in Rota, was struck by the sailor&#8217;s humility.

But the rarity of Miller&#8217;s accomplishment necessitates recognition, Smith said. "It means that he as an individual, and the unit he was a part of &#8230; were exceptionally professional and competent in what they did, and did it safely.

Miller was assigned with EOD Mobile Unit-8 in Sigonella, Sicily, for the two tours in Iraq. Since October, he has been assigned to the unit&#8217;s smaller Rota-based detachment.

Twice, he volunteered for Iraq service.

From June to December 2007, Miller was attached to the Vilseck, Germany-based 2nd Stryker Cavalry Regiment in Baghdad. The dangers were present daily, from raids and searches for explosives in homes to disarming roadside bombs.

From March to August 2008, Miller was attached to a smaller and more specialized Army unit, one which he cannot disclose identifying information.

He doesn&#8217;t talk much about his combat experiences outside the close-knit group of fellow warfighters. "I&#8217;m not sure I feel comfortable talking about it," he said. "We talk about our experiences with out brothers, you know, and I kind of want to keep it that way."

Miller grew up in Branson, Mo., and joined the Navy on Aug. 14, 2002, after seeing a poster of a Navy EOD diver in the recruiter&#8217;s office. "I thought it looked cool," said the avid diver who started recreational diving when he was about 15.

His tour in Rota now gives him some "shore time" to spend with his wife and 4-month-old son, Frederick.

"I am going to be here in Spain for a few years because I just got off a deployment cycle," he said. "It is going to be nice to be able to spend time with my wife and kid, and there is no better place to do it than here in southern Spain."