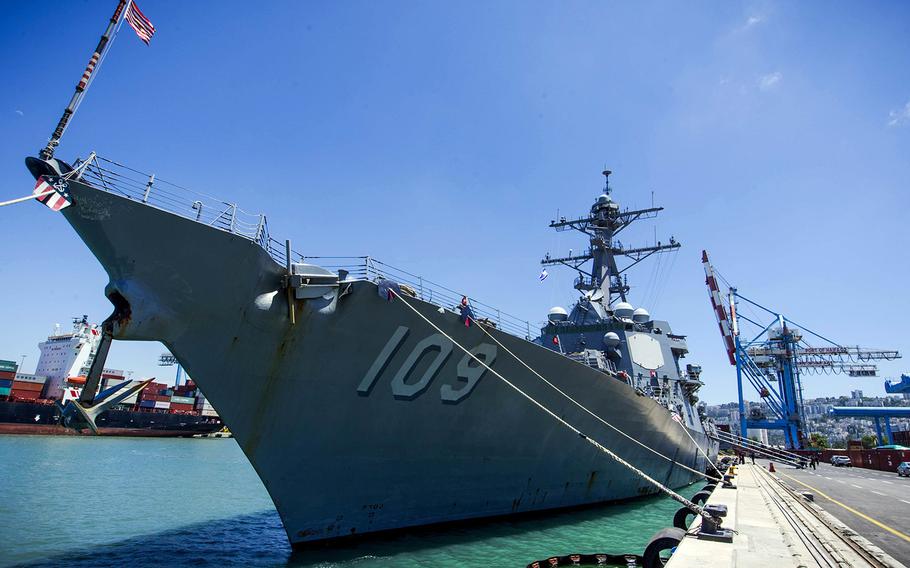 In a June 19, 2018 file photo, the guided-missile destroyer USS Jason Dunham is moored at the pier in Haifa, Israel, during a scheduled port visit. ( Jonathan Clay/U.S. Navy)

WASHINGTON – A Navy sailor was killed in a non-combat incident while conducting small-boat operations in the Red Sea, a Pentagon spokesman said Monday.

The sailor was evacuated Sunday to a hospital in Aqaba, Jordan, and was pronounced dead about 12:45 p.m. local time, said Army Col. Rob Manning, a spokesman for the Pentagon. The sailor’s name was not immediately released, pending family notification.

Manning said there was no indication of enemy activity in the area and the Navy did not suspect foul play in the death. An investigation into the incident is ongoing, according to the Navy.

Another Pentagon spokesman characterized the sailor’s death as “an accident.” Small-boat operations typically include the use of small, fast vessels – often motor-driven inflatable crafts – to carry personnel from warships to the coastline or near it.

The sailor was assigned to the USS Jason Dunham, an Arleigh Burke-class, guided-missile destroyer based at Norfolk in Virginia. The ship is deployed to the Navy’s 5 th Fleet, which conducts operations in the U.S. Central Command area of responsibility throughout the Middle East and western Asia.

The Dunham deployed in June, according to the Navy.