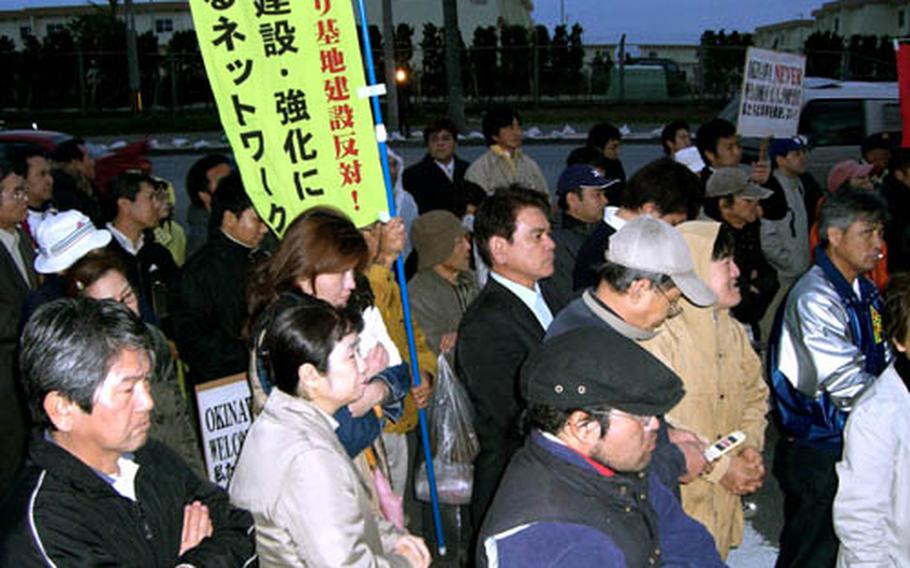 Demonstrators stand outside the Headquarters Gate of Camp Foster protesting the alleged rape Sunday of a 14-year-old Okinawa girl by a Marine Corps staff sergeant in 2008. On Monday, a U.S. sailor assigned to Camp Schwab was officially charged with a sexual assault against a Japanese national. (Chiyomi Sumida/Stars and Stripes)

CAMP FOSTER, Okinawa — A U.S. Navy sailor assigned to Camp Schwab has been charged with raping a Japanese woman in an Okinawa hotel, a case that could enflame tensions on the tiny island prefecture, if history is any indication.

Japanese police say Seaman Apprentice Justin Castellanos, 24, found the female tourist, from the mainland city of Fukuoka, intoxicated and asleep in the hotel’s hallway, took her into his room and raped her between 1 and 4 a.m. Sunday.

A friend of the woman, who is in her 40s, reported the alleged incident, and police took in Castellanos for questioning. He was placed under arrest at the police station, and the case was referred to prosecutors Monday afternoon. Police say Castellanos denies the allegations.

Okinawa has been the site of several high-profile sexual assaults over the years, including a case involving two Navy reservists in late 2012 that led to a curfew for all U.S. servicemembers in Japan. The curfew, slightly relaxed in 2014, remains in effect.

“The incident is extremely deplorable,” Japanese Chief Cabinet Secretary Yoshihide Suga said at a news conference Monday. “Japan filed a strong protest with the U.S. Embassy. At the same time, we called for enforcement of strict discipline and preventive measures.”

Capt. Jeff Davis, spokesman for the Pentagon, said Monday that Castellanos is in Naha police custody.

"U.S. Forces Japan, the Marine Corps, the Navy and the Naval Criminal Investigative Service are cooperating fully with the Naha city police department and their investigation," he said.

Davis was unaware whether the incident has sparked changes to off-base privileges.

"That would be the purview of the commanders on the ground," he said.

Suga deflected questions at the news conference on whether the incident would affect the planned relocation of Marine Corps Air Station Futenma, which has been the target of small but vocal protests. But Okinawa Gov. Takeshi Onaga, who has been openly critical of the relocation plan, condemned the incident Monday.

“It was a serious crime that violated women’s human rights, which is never to be tolerated,” Onaga was quoted as saying by a spokesman. “I am indignant.”

A protest was filed Monday with the Okinawa Liaison Office of the Ministry of Foreign Affairs and Okinawa Defense Bureau, his spokesman said. A protest will also be lodged with U.S. military officials.

Some Okinawans have bristled at hosting more than half of the U.S. troops stationed in Japan even though the island accounts for less than 1 percent of its total land mass.

Crimes committed by American servicemembers have been on the decline in recent years, but sexual assaults continue to draw the ire of local residents.

In the most high-profile case, three U.S. servicemembers abducted and raped a 12-year-old schoolgirl in 1995. That led to mass protests and plans to reduce the U.S. military footprint on the island and relocate Futenma from a densely populated area.