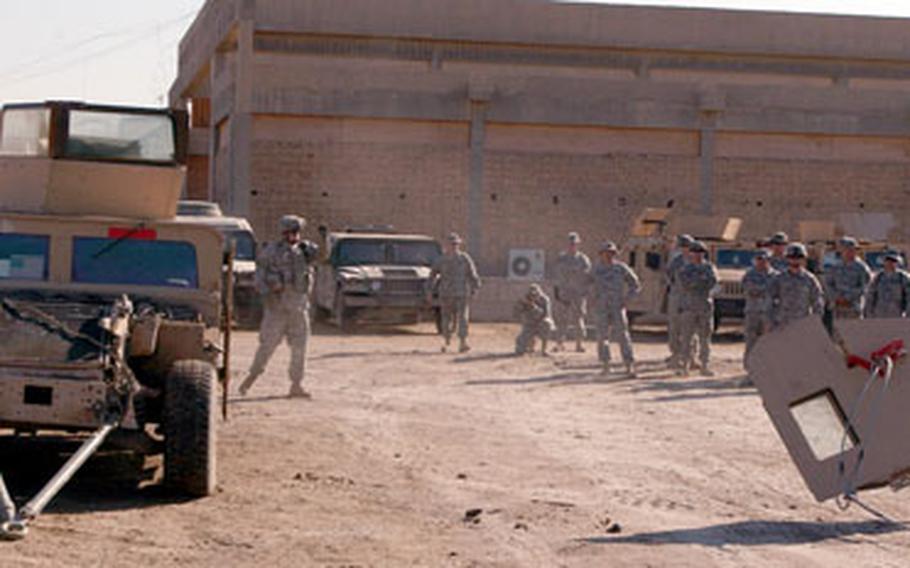 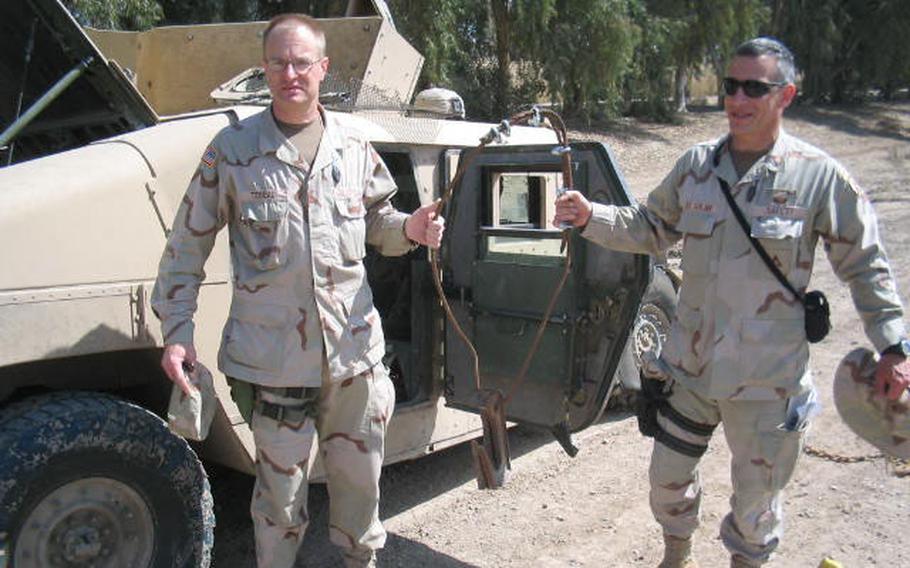 At right, Bill del Solar, safety officer with the 2nd Brigade Combat Team, 10th Mountain Division, invented what he called the "Door Puller" to get trapped servicemembers out of damaged vehicles. He and Karl Tabeau, Army Materiel Command, who helped with the testing, hold up their first version. (Courtesy of U.S. Army)

ARLINGTON, Va. &#8211; Lt. Col. Michael Infanti doesn&#8217;t remember the blast from the roadside bomb that killed his interpreter and flipped his Humvee onto its roof.

But Infanti, of the 10th Mountain Division, does remember being trapped in the vehicle as it leaked fuel on him.

With a concussion and blunt force trauma to his back, hips and right shoulder, Infanti hoped his troops could get him out before his Humvee burst into flames.

Fortunately, his troops had a device known commonly as a &#8220;Rat Claw,&#8221; a piece of wire rope that hooks on to the door of a disabled vehicle, allowing troops to attach it to another vehicle to pull the door off.

Using the Rat Claw, Infanti&#8217;s troops were able to get him out of the Humvee in two to three minutes, Infanti said.

&#8220;Without it, who knows what would of happened, especially if the vehicle would have caught fire,&#8221; he said.

Bill del Solar, safety officer with the 2nd Brigade Combat Team, 10th Mountain Division, said he is the inventor of the Rat Claw, which he originally named the &#8220;Door Puller,&#8221; but the device&#39;s actual origin is contentious.

Del Solar said he worked together with Scot Rose, fire chief ata U.S. base in Baghdad, to create the device.

But the company Ibis-Tek, which worked with Rose to develop the device as the "Rat Claw," maintains that the device was Rose&#39;s idea, according to the company.

Asked about Ibis-Tek&#39;s comments, del Solar said he and Rose worked together on the device&#39;s design.

In any case, del Solar said the device he worked with Rose to make is now widely known as the "Rat Claw" among U.S. troops.Del Solar said he came up with the idea for the device during his tour in Iraq, when his unit suffered a lot of vehicle rollovers, del Solar said.

At the time, the standard way of getting troops out of vehicles once they rolled over was to unbolt each of the two to six bolts that hold Humvee doors on, he said. That can be time consuming and difficult, especially when vehicles roll into canals.

So beginning in February 2005 in Baghdad, del Solar began to look for a better way to get troops out of disabled vehicles in a hurry. The effort took some foraging.

Del Solar said he turned his invention over to the Army, and it became available to troops in Iraq in the early part of 2006.

Because the device is new, the Army had no numbers about how many Rat Claws are in theater or if they have cut down on the number of rollover fatalities, an Army spokesman said Friday.

Del Solar said he does not know how many units have the device, but he hopes word spreads about what it can do.