Safety of older vehicles remains a concern for soldiers in Iraq 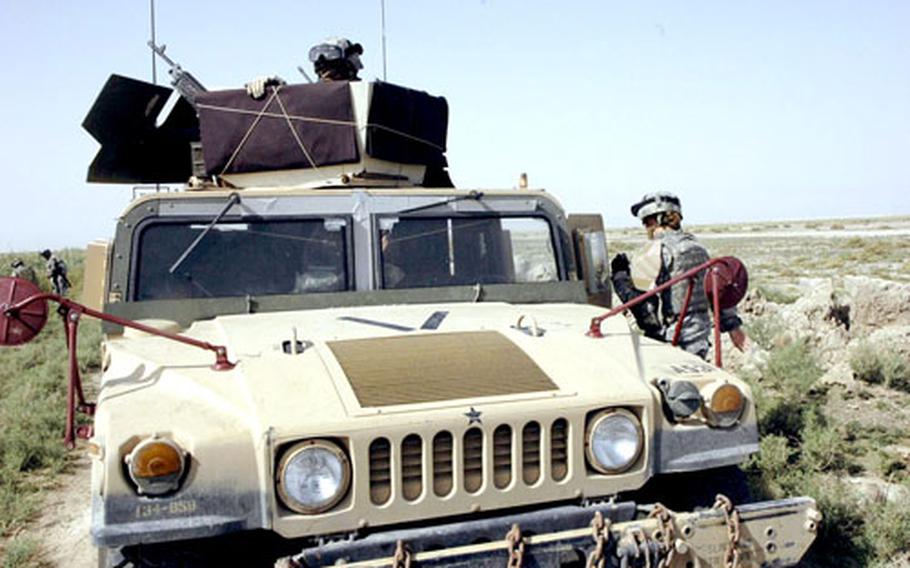 Some soldiers in the 134th Brigade Support Battalion, a Minnesota Army National Guard unit from the 1st Brigade Combat Team, 34th Infantry Division, have added extra protection to their Humvees, such as the Kevlar blankets wrapped around this gunner&#39;s shield. (Anita Powell / S&S)

Some soldiers in the 134th Brigade Support Battalion, a Minnesota Army National Guard unit from the 1st Brigade Combat Team, 34th Infantry Division, have added extra protection to their Humvees, such as the Kevlar blankets wrapped around this gunner&#39;s shield. (Anita Powell / S&S) Some vehicles, like this one, show signs of wear, like a tear on the side above the tire. (Anita Powell / S&S)

CONVOY SUPPORT CENTER CEDAR II, Iraq &#8212; Three years into the war in Iraq, some soldiers in southern Iraq still lack the most up-to-date armored vehicles that would better protect them on the most dangerous roads in the world.

Soldiers with the 134th Brigade Support Battalion, a Minnesota Army National Guard unit from the 1st Brigade Combat Team, 34th Infantry Division, often ride around the relatively tranquil rural area near Nasiriyah in trucks with minimal armor, most built before 1990.

The vehicles, made distinctive by their protruding windows, have half-inch-thick doors, little to no floor or roof armor and no extra protection around the gunner&#8217;s turret. Many of the battalion&#8217;s vehicles are a little battle scarred: dents and holes in doors, roofs, floors and on the side.

When in motion, the vehicles&#8217; doors often rattle against the doorframes, swinging out to leave an inch of space between door and frame. The 2-inch-thick windows do the same.

Soldiers in the battalion universally complained about their less-than-perfect ride. Many, like Sgt. Mitchell Becker, 26, of Minneapolis, use the situation as a cause for morbid humor.

When asked how the vehicle would handle a roadside bomb, Becker chuckled.

The soldiers, who were originally issued updated, factory-armored Humvees, known as 1114s, said those were switched out earlier in the deployment for the older 1025s. Soldiers in the battalion said they were told they&#8217;d receive their own 1114s within months. Becker said he&#8217;s been asking about the replacements ever since.

Lt. Col. Brian Olson, the battalion commander, said he anticipates replacing the battalion&#8217;s fleet of older Humvees with larger vehicles and with updated Humvees. The process should be completed by the end of July.

&#8220;I know there are some soldiers who have some concerns about their equipment,&#8221; he said. &#8220;I am worried about each one of my soldiers and their family members until I can get them back home safely.&#8221;

He disputed that the older vehicles were less safe than their factory-armored counterparts.

Soldiers have taken it upon themselves to add protection, such as Kevlar floor mats in some vehicles and Kevlar blankets wrapped around some gunners&#8217; turrets. Additionally, soldiers said, the vehicles are equipped with electronic defenses.

Although the Shiite-heavy area is fairly tranquil compared to other parts of Iraq, action has been increasing recently.

Two soldiers, Pvt. Benjamin Slaven of Plymouth, Neb., and Sgt. Brent Koch, of Morton, Minn., both 22, were killed this month after their vehicles were struck by roadside bombs north of Nasiriyah, near Diwaniyah. Both men were riding in updated vehicles at the time: Slaven in a newer, factory-armored Humvee and Koch in an armored cargo truck.

Sgt. Kelly Hagan, 34, said he is less worried about himself than he is about his colleagues who run convoy-security missions as far north as Baghdad.

That said, soldiers universally expressed a desire for new trucks.

When asked how he feels about his current ride, Nash raised his hands resignedly and pointed at his truck.