Safety in Baghdad depends on perspective 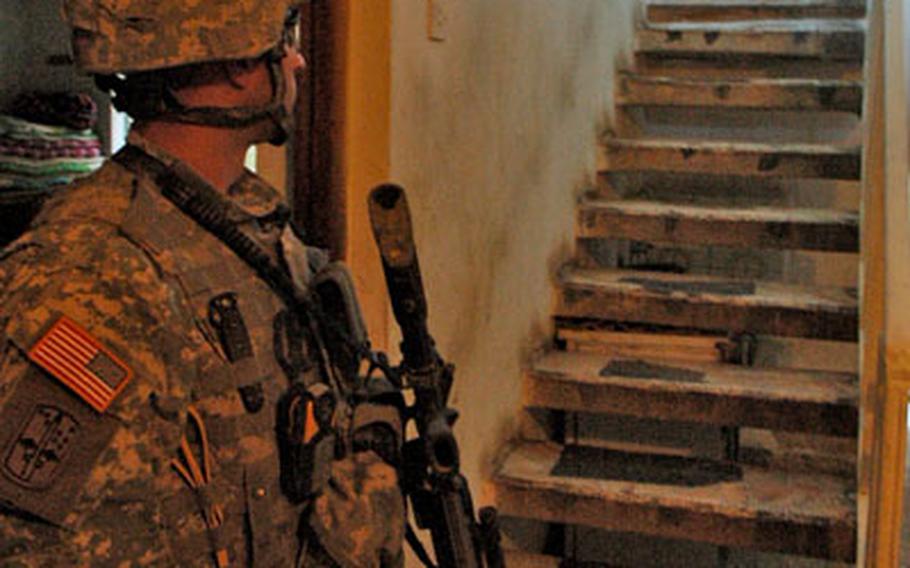 A Company B, 1st Battalion, 17th Infantry Regiment soldier looks up at a young resident during a house search in Baghdad&#39;s Shab district. (Anita Powell / S&S)

A Company B, 1st Battalion, 17th Infantry Regiment soldier looks up at a young resident during a house search in Baghdad&#39;s Shab district. (Anita Powell / S&S) 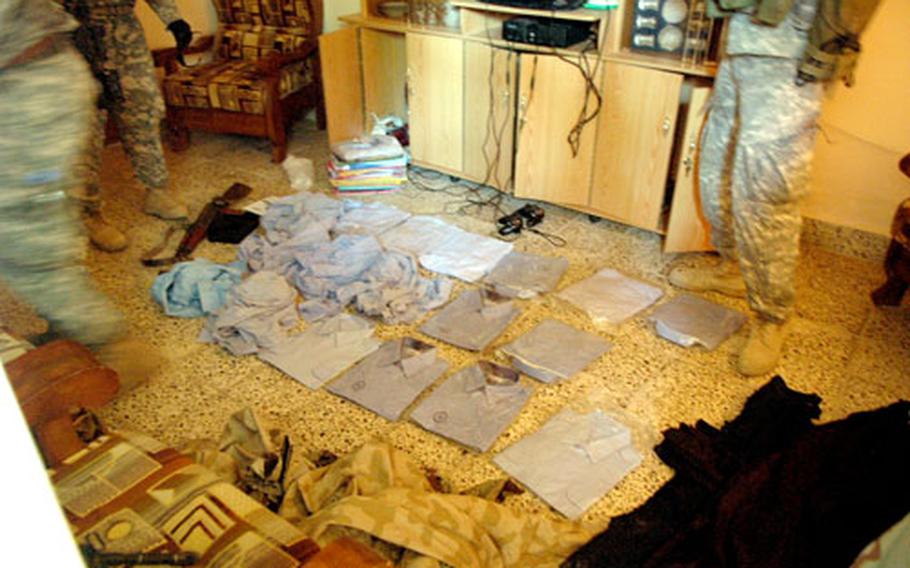 BAGHDAD &#8212; Purging sectarian violence from Baghdad is a slow and arduous task, as soldiers from the Fort Wainwright, Alaska-based 172nd Stryker Brigade Combat Team learned over the last week while beginning clearing operations in the areas around Sadr City.

For the last week, soldiers from 1st Battalion, 17th Infantry Regiment have painstakingly combed through homes, fields, markets and even landfills, hunting for ever-elusive evidence of sectarian violence. The effort is part of an ongoing operation, called Operation Together Forward, aimed at reducing sectarian violence in the capital.

Their labors turned up relatively little in the way of illegal weapons and high-level insurgents, and little evidence of the illegal checkpoints, secret prisons, kidnapping gangs and rampant militias that American officials and Iraqis say stalk the neighborhoods around Sadr City.

But military officials say the efforts have had some success: namely, a disruptive effect on sectarian violence in the area.

&#8220;We&#8217;re seeing results in some neighborhoods,&#8221; said brigade commander Col. Michael Shields, though he said it was too soon to make a more definite pronouncement.

&#8220;When I heard the good news about the American operation, I felt happy,&#8221; said 67-year-old resident Jaodat Salman Saleh.

Many also described their violence-ridden area as &#8220;a safe neighborhood,&#8221; saying that &#8212; despite the proliferation of anti-American literature, green and white militia flags and the ubiquitous portraits of Shiite militia leader and anti-American firebrand Muqtada al-Sadr &#8212; there was no militia presence in the area.

However, some locals &#8212; many of them Sunnis who had been subjected to persecution at the hands of their Shiite neighbors &#8212; painted a grimmer picture: of near-total militia saturation; of Iraqi police and soldiers alerting nearby insurgents before accompanying American soldiers on joint searches; of locals stashing weapons in police stations, schools, and even mosques and hospitals; and Baghdad&#8217;s increasing segregation into sectarian enclaves.

The Nofa family are Sunnis who have lived in a spacious and well-appointed home in the mostly Shiite Shab district for 20 years. These days, they&#8217;re looking for a new place to live.

Five months ago, his younger brother Karim, a taxi driver, was kidnapped by the militia because he was driving in a Shiite neighborhood. Karim, 24, was lucky: he was interrogated, beaten and released the next day. The militia kept the taxi.

When asked how to remedy the sectarian violence, Halim&#8217;s answer was immediate.

Lt. Gen. Peter Chiarelli, during a visit to the area on Monday, agreed that militias &#8212; both Shiite and Sunni &#8212; are a major contributor to sectarian violence.

But he noted that the American military cannot pursue the Jeish Al-Mahdi without the blessing of the Shiite-led Iraqi government, which has thus far remained quiet on the issue.

During their searches, 1st Battalion, 17th Infantry Regiment soldiers viewed locals warily, joking amongst themselves about the militia&#8217;s stranglehold over the area.

Earlier in the week, children pelted soldiers with rocks on a daily basis; some children later admitted that they had been paid to do so.

But the soldiers&#8217; travails did yield some results. In two houses belonging to the same family, soldiers hit pay dirt: 18 Iraqi police uniforms (many still wrapped in plastic), several Iraqi army uniforms and ballistic vests, a brand-new Glock, a dozen radios, piles of court documents and enough bullets to kill most of the neighborhood.

The owner, who said he was a major in the Iraqi police, gave a succession of changing stories to account for his treasure trove, which would nicely outfit a kidnapping squad masquerading as law enforcement.

After the man was arrested by American soldiers, his brother approached battalion commander Lt. Col. Al Kelly and pleaded on his behalf.

He said his brother had simply filched extra office supplies from work.

But even in such circumstances, hope remains that American presence will bring some peace.

Local headmistress Hurriyah Mohammed said the situation was so dire that she would put faith in any effort to stanch the violence.