Safety gets another look in wake of subway blaze 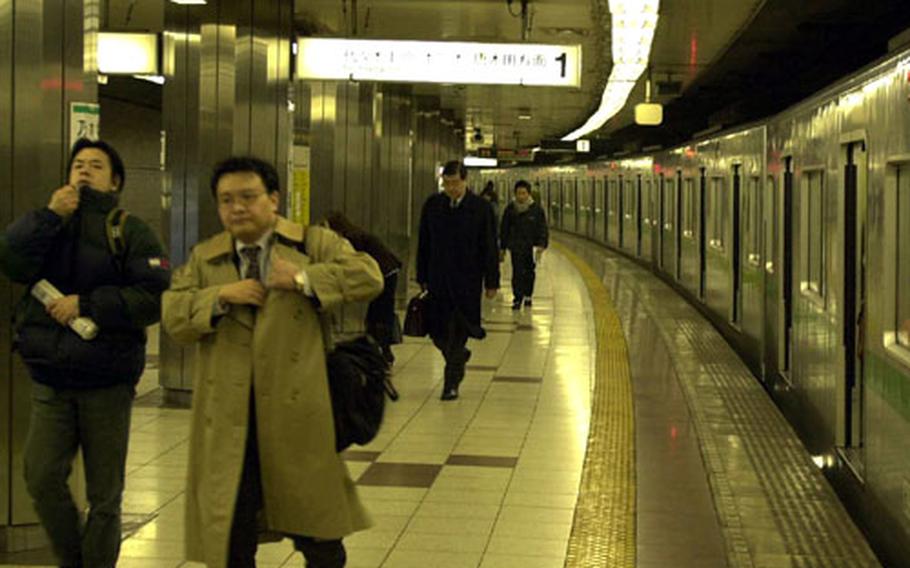 In the aftermath of the Taegu, South Korea, subway fire that killed 196 passengers, operators of Tokyo subways have been inspecting safety-related systems installed on passenger cars like these on Tokyo&#39;s Chiyoda Line at Nogizaka station in central Tokyo. (Wayne Specht / S&S)

TOKYO &#8212; Tokyo subways are being inspected more closely than ever in the aftermath of a Feb. 18 arson attack that burned two subway trains in Taegu, South Korea, killing 196 passengers.

In 1968, Japan&#8217;s worst subway fire injured 11 people and gutted three coaches of an out-of-service train running on the Hibiya subway line of the Teito Rapid Transit Authority in the heart of Tokyo.

After a 1972 blaze that killed 30 people aboard a long-distance commuter train, the Japanese government set additional rules mandating installation of battery-powered lighting equipment in passenger cars, and sprinklers were installed along all station evacuation passages.

Also mandated in 1975: installation of smoke control and alarm systems on all rail lines.

Imamura said fire-resistant materials now are used when passenger cars are built, including the roofs, walls and seats. Fire extinguishers became mandatory on all cars in 1969.

The Japanese government only sets standards of safety. It is up to individual railway operators to ensure safety procedures are tested, he said.

In the Taegu tragedy last month, the fire caused a power blackout that left trapped passengers and rescuers in darkness after doors of passenger cars automatically closed when the engineer fled the train.

Doors of Tokyo subway cars are designed to be easily forced open by passengers in case of emergencies.

&#8220;We rechecked all our cars and stations on the next day after the accident,&#8221; said Ii. &#8220;Everything that has to do with evacuation, such as safety equipment, fire extinguishers, radios, doors and emergency lights, was checked.&#8221;

All trains are equipped with batteries, &#8220;so there should be no situation where there is no power,&#8221; he said.

The batteries are expected to last for 30 minutes to 1 hour depending how they are used, he said.

In South Korea, government officials are working to educate their mass transit riders in the wake of the deadly fire, according to information on the Ministry of Construction and Transportation&#8217;s Web site.

Korean National Railroad and subway corporations in Seoul, Pusan, Inchon and Taegu now broadcast messages informing passengers of safety measures, including how to open the subway doors by hand, how to use the emergency bell and how to evacuate safely in an emergency situation.

Signs also will be posted in passenger cars with emergency information.

The U.S. military in South Korea has not banned servicemembers from using the nation&#8217;s subways as a result of the Taegu fire, a USFK spokeswoman said Thursday.

The Taegu subway fire will be among items on the agenda of the USFK Force Protection Working Group at its regularly scheduled monthly meeting next Monday, said Air Force Master Sgt. Dawn Hart, a USFK spokeswoman. The group meets monthly to review force protection matters and, when warranted, makes recommendations to the USFK commander, Gen. Leon J. LaPorte.