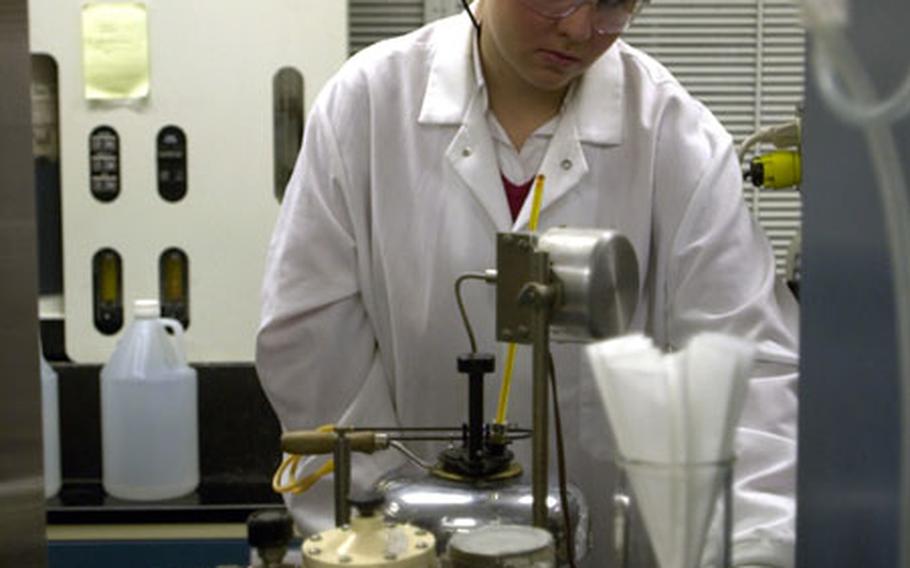 The mechanics claim they keep the birds in the air.

While they both may argue who&#8217;s more important to an aircraft, those with the JP-8 fuel can sit back and laugh.

Because without the fuelers, the planes can&#8217;t leave the ground.

The unit issues and stores fuel and supplies all JP-8 fuel, all while dealing with environmental issues of working with the hazardous material.

Hoelscher said the flight has 12 fuel tanks that can hold 4 million gallons each.

Each tank is made of metal and is surrounded by cement to contain any spills. He said each tank is emptied and inspected once every seven years to ensure there are no cracks or leaks.

If there are, the problem is fixed, and the tank goes back into service. An electronic fuel-monitoring system keeps tabs on the tanks 24 hours a day, Hoelscher said.

The new way of monitoring fuel is much better than when he first joined the Air Force, he said, when they used to manually test how much fuel was in each tank with a rod.

In addition to the computerized monitoring system providing safety, Hoelscher said members of the flight train every day by practicing and teaching spill prevention. He said spills kits are readily available and absorbent materials are immediately put on a spill when one happens.

Along with daily training, Hoelscher said other safety measures are taken.

Ulrich said they usually fill 10-15 trucks each day, at five to seven minutes per truck. But he said when the units are surging and flying for hours on end, they will fill 20 trucks or more.

To ensure the fuel meets specifications, samples are sent to the Fuel Lab on base every 45 days, according to Maj. Brian Quillen, chemical engineer from the Air Force Petroleum Office. He said the lab at Kadena is responsible for testing fuel from all Air Force bases in the Pacific.

Quillen added that the lab tests about 100 samples each month, but only 16-20 percent of that is jet fuel.

Fuels are first tested at the refineries before they are shipped. The Army tests it again when it arrives to Okinawa. Quillen said that&#8217;s when the fuel is certified to meet the specifications at Kadena. Once certified, the fuel is pumped into the massive storage tanks to await use on the flight line.