Safety briefings a prelude to summer for Marines on Okinawa 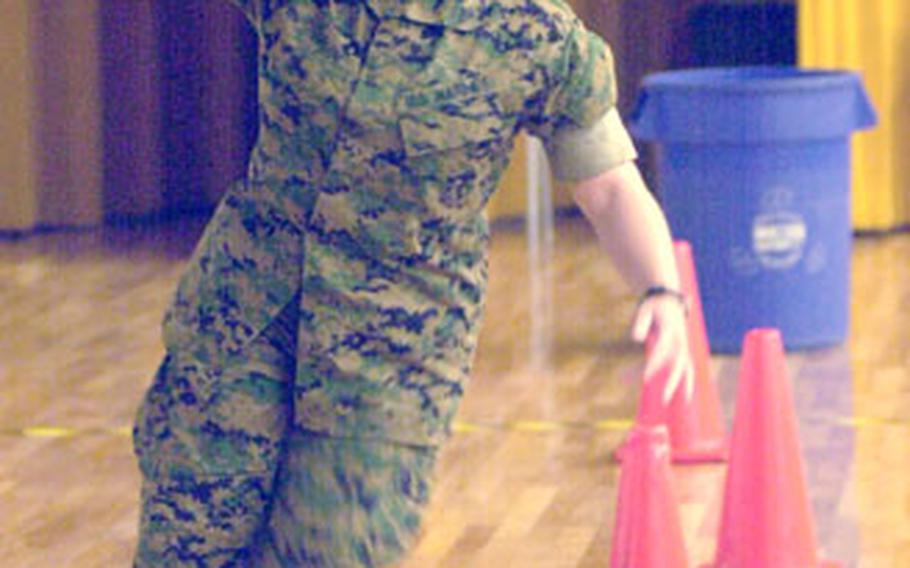 Cpl. Lauren Hannah races around cones as quickly as possible while wearing goggles that simulate the effects of alcohol, part of a safety stand-down on Camp Foster, Okinawa, on Friday. (Fred Zimmerman / S&S)

CAMP FOSTER, Okinawa &#8212; With the 101 days of summer fast approaching, officials here are spreading the word about staying safe through the season with a series of safety stand-down briefings.

Safety officials from Marine Corps Base and Marine Corps Community Services have joined forces to hold the briefings and remind servicemembers how they can get through the season incident-free.

The period from Memorial Day to Labor Day is typically dubbed the &#8220;101 days of summer,&#8221; according to Robbin Johnson, an Occupational Safety and Health Specialist with the Camp Foster safety office.

Johnson said it could be a dangerous time as more people head outdoors and take part in various activities that could turn dangerous if the participant isn&#8217;t careful.

The briefings are being held at all Marine Corps camps on the island, Johnson said, with most taking place this month. Camps Courtney and Lester briefings will be held in June.

In addition to the briefings, Johnson said hands-on activities have been created to get the Marines involved.

During a Friday morning briefing at the Camp Foster Theater, one of the activities was two Marines donning goggles simulating various degrees of intoxication and racing around cones.

The loser of the race put on a more severe degree of goggles and then was given a field sobriety test by a military policeman.

&#8220;Putting on the second pair of goggles was weird,&#8221; said Cpl. Lauren Hannah, who works in the intelligence section of Marine Wing Headquarters Squadron 1.

Johnson said getting the Marines involved in the briefings is better than just giving a presentation, because it&#8217;s more likely the message will sink in.

Hannah agreed, saying she&#8217;s been to briefings that weren&#8217;t as effective because they lacked interaction.

In addition to the camp safety briefings, Johnson said each week throughout the summer a different outdoor activity will be highlighted. Topics range from children and pets in cars to barbecues, campfires and fireworks.