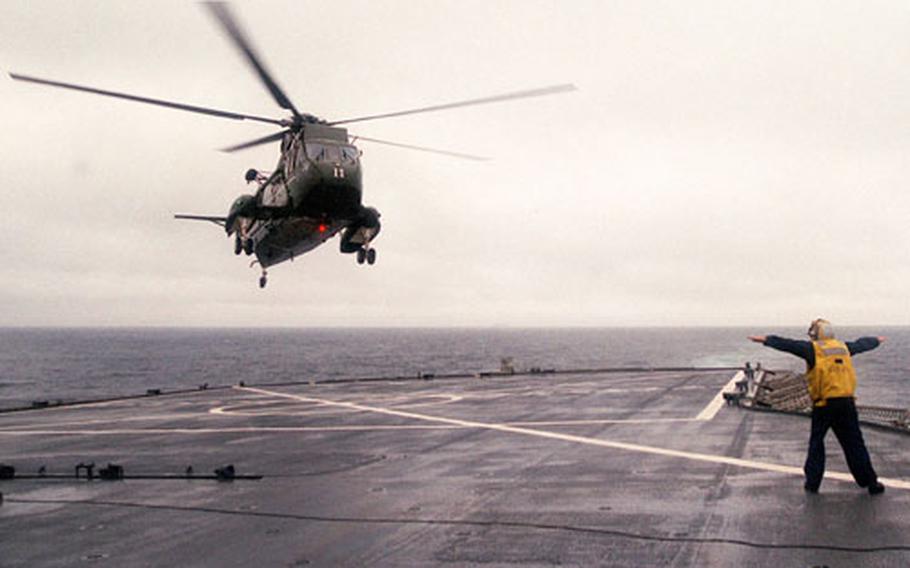 A UH-3H Sea King helicopter from HSL-51 prepares to land on the deck of the USS Blue Ridge at sea. The Atsugi, Japan-based squadron earned a Battle "E" for 2002, the fifth time it has won the award in the unit&#39;s 11-year history. (Courtesy U.S. Navy)

ATSUGI NAVAL AIR FACILITY, Japan &#8212; Imagine driving your car for 75,000 consecutive hours at 60 mph, which would take you around the world 180 times or to the moon and back 10 times. Now imagine accomplishing that feat without a single accident.

In its 11-year history, the HSL-51 helicopter squadron from Atsugi has accomplished the aviation equivalent, racking up a perfect safety record after seemingly countless deployments aboard 7th Fleet ships. As a result, the Warlords, as the unit is known, earned a fifth Battle &#8220;E&#8221; this year as the best anti-submarine squadron in the Pacific.

&#8220;Safety is obviously an important issue, and it certainly had a lot to do with us winning the Battle &#8216;E.&#8217; But the award is for battle efficiency, and there are so many variable missions that we train for and execute.&#8221;

Last year the Warlords logged 6,800 flight hours in 13 aircraft, an average of 18 hours a day, the equivalent of 700 days under way.

In addition to the Battle &#8220;E,&#8221; the Warlords also earned the 2003 Arnold J. Isbell award for Excellence in Undersea Warfare, topping all other squadrons in the Wing. Last year the Warlords dropped 29 torpedoes and flew more than 650 hours of training against undersea threats.

This spring, they&#8217;ve put that practice to work. At least one detachment of aircraft from the squadron is deployed to the Central Command area of operations to support the war in Iraq.

Navy officials, however, declined to comment on the role of the helicopters or what missions they&#8217;d performed.

Pilots from the squadron say technical advances have allowed the choppers to expand what they can contribute to missions. Not only do they hunt subs, they also can track and engage surface contacts.

&#8220;It was a change made after the first Gulf War,&#8221; Thompson said. &#8220;The threat was from modified cigarette boats that would have surface-to-air missiles or machine guns mounted on them. Now we can engage those targets as well.&#8221;

Those increased capabilities led the Warlords to take part in operations Enduring Freedom, Desert Storm and Desert Fox. The squadron also has trained with its counterparts from Japan, South Korea, Thailand, India, Singapore and Taiwan.

In that time, the squadron&#8217;s members are ever eager to point out, there have been no accidents.