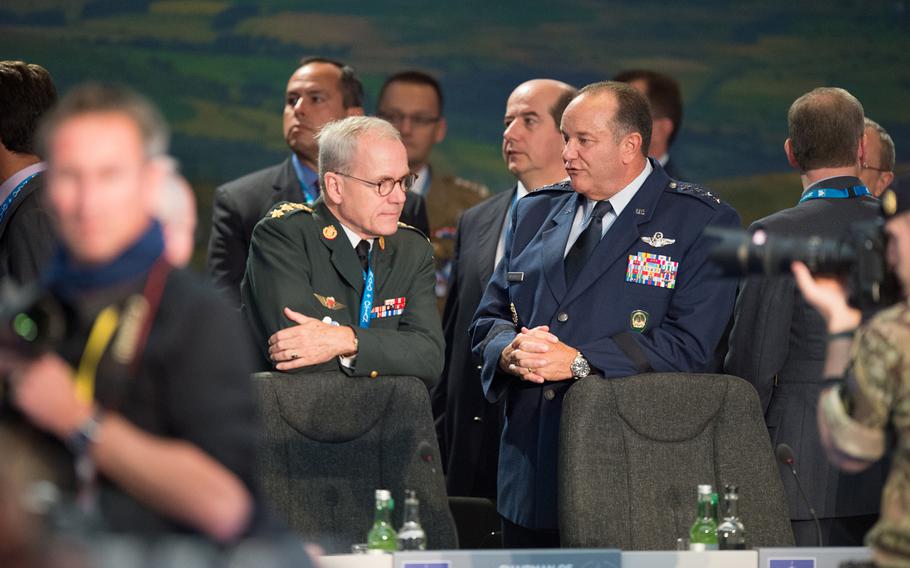 Before the incursion of what Western officials say are regular Russian troops into Ukraine, Moscow stirred unrest in other ways during the early stages of the crisis, Breedlove said during an Atlantic Council event that coincided with the start of NATO’s two-day summit in Wales.

Russia’s utilization of troops without national uniforms — the so-called “little green men” — and perhaps “the most amazing information warfare blitzkrieg we have ever seen in the history of information warfare” were part of the first Russian push in Ukraine, Breedlove said.

NATO members, especially the Baltic states that border Russia, must take into account such tactics as allies prepare for future threats, he said. That means steps should be taken to help build the capacity of other arms of government, such as interior ministries and police forces, to counter unconventional attacks, including propaganda campaigns, cyberassaults or homegrown separatist militias.

“What we see in Russia now, in this hybrid approach to war, is to use all the tools they have ... to stir up problems they can then begin to exploit through their military tool,” said Breedlove, NATO’s supreme allied commander.

By building up pre-crisis capabilities to deal with such tactics, nations will be better able to assign responsibility to an aggressor nation, which is key to triggering NATO involvement in a crisis, Breedlove said.

Article 5 is the NATO principle that an attack on one member requires a collective response from all.

Russia continues to deny it has forces in Ukraine, an assertion Breedlove described as absurd.

“We’re observing Russian forces fighting alongside separatists inside Ukraine,” Breedlove said. “Russian air defense assets are being used to conceal the advance of Russian tactical units throughout eastern Ukraine, and still, still, Moscow is continuing to deny any direct involvement across the border. Despite the casualties and deaths that are mounting of their own soldiers.”

In Wales, NATO is expected to act on plans to establish a more visible presence in eastern Europe with a focus on maintaining a troop presence at a series of bases in the region. NATO also needs a forward-stationed headquarters in the region that is focused on Article 5 preparedness, Breedlove said.

An increased presence, along with a NATO Response Force reshaped to better handle rapid-reaction missions, is needed in answer to Russian aggression in Ukraine, Breedlove said. With an operational presence in the east, NATO will also have the ability to surge forces if needed.

“If we need to, we can rapidly respond with much larger and more capable forces if we see an act of aggression,” Breedlove said.