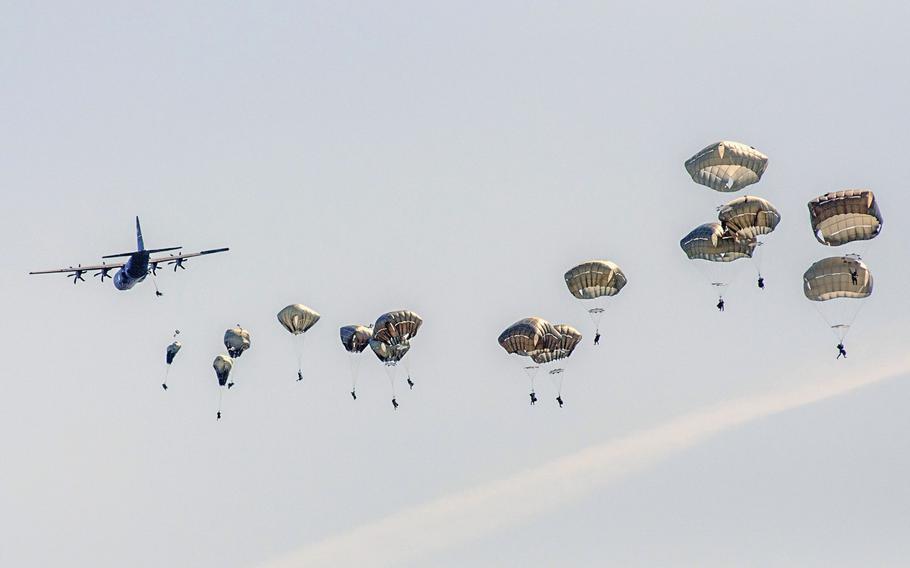 Paratroopers drop into the Hohenfels, Germany, training area Wednesday, Aug. 26, 2015. Hundreds of American, British and Italian paratroopers will take part in the Saber Junction 16 exercise next week in the same area and a German civilian field two miles away. (Michael S. Darnell/Stars and Stripes)

Saber Junction is a series of exercises designed to test the combat readiness of the American brigades stationed in Europe. In recent years, the main participants have alternated between the German-based 2nd Cavalry Regiment and the Vicenza, Italy-based 173rd Airborne Brigade.

This year, it’s the 173rd seeking USAREUR certification of readiness. Thousands of troops from 15 NATO and allied nations are also taking part in the monthlong exercise currently underway at the Joint Multinational Readiness Center in Hohenfels.

And while large airborne exercises are nothing new for JMRC, this year’s air assault at Saber Junction comes with a twist.

In addition to about 200 airborne soldiers who will drop into Hohenfels, another 1,000 — consisting largely of American, British and Italian troops — will land roughly 2 miles east of the base’s border into German-controlled, civilian-populated lands, according to U.S. Army Capt. David Sherek, maneuver planner for JMRC and a scenario designer for this exercise.

According to a statement released by the U.S. Army, this is just the latest usage of a long-standing agreement between the U.S. and Germany that gives the American military the right to conduct operations outside the confines of their bases. They do so in areas designated by the German defense ministry as “maneuver rights areas.”

Sherek said the usage of such areas is sometimes necessary, such as when an air assault requires more space than available at Hohenfels.

“What we wanted to do was to design the most realistic, tactical scenario that we could (since) the 173rd had an emerging airborne technique that used multiple drop zones.” Sherek said.

Part of the 173rd’s mission is to land in offset drop zones, secure them and move to eventually join up. Sherek explained that the two landing areas on Hohenfels proper were just too close together for that maneuver to be carried out realistically, thus making it necessary to use an area farther away for the drop zone.

The planning for Saber Junction began a year ago and the German authorities have been involved in the planning process every step of the way, he added.

Sherek said that cooperation will continue throughout the exercise. German officials will be on hand at an operation command center, as will the Bavarian Red Cross. Local police and firefighters will also be helping set up roadblocks and will be available in case of an emergency.

“Obviously, something can always go wrong. But there have been a lot of experts and a lot of people that have looked at all this to make sure there is the smallest possible risk to anybody in the local area.”