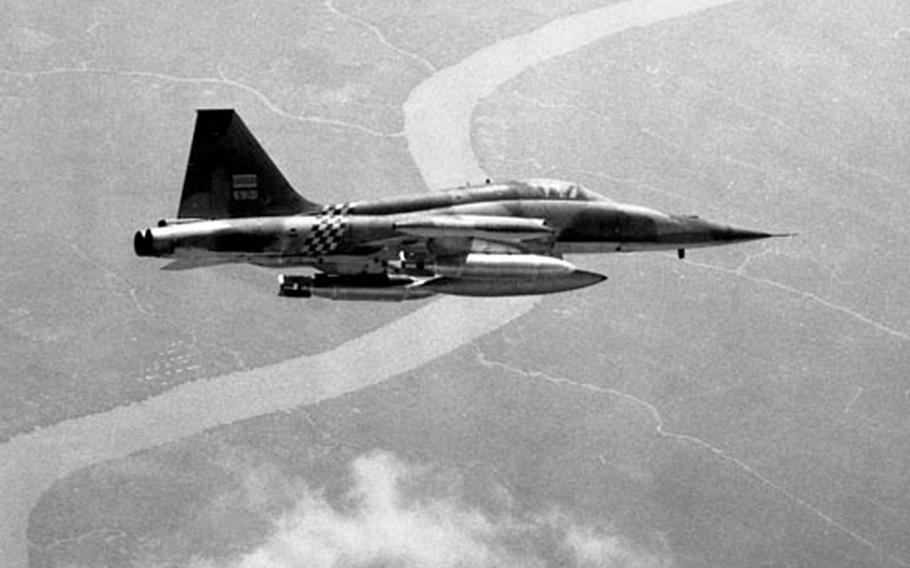 BIEN HOA, Vietnam- Capt. Nguyen Quoc Hung awakens early each morning, slips into a clean flight suit, has breakfast, bids his wife goodly and climbs on his motor bike to go to work.

He slips a gear as he leaves his house in Saigon and smiles to himself about his poor bike riding.

He scoots through Saigon's morning traffic jams, dodging everything from 2½-ton trucks to ox-drawn carts and then hits the Bien Hoa highway.

Within an hour after leaving home he parks his motor bike outside the 522nd Tactical Fighter Sq. headquarters building at Bien Hoa AB. Before the day is out Hung will be piloting something he feels more at home with than his motor bike.

Hung is the commander or South Vietnam's 25 most elite pilots who fly the Republic's only jet fighter planes, the F5 "Falcons."

Hung, at 5 feet, 6 inches, is slightly larger than most Vietnamese. His 120 pounds are well distributed.

He is a rather quiet man, a man who seems to know why he is fighting and goes about it in a professional, self-assured way.

At 32, he has seen a lot or war. He has more than 2,000 hours in fighter planes. He was shot down by the Viet Cong when he was still flying the prop-driven A1E Skyraiders and during the Tet offensive he was captured by the Communists.

On the night of Feb. 2, the Viet Cong broke into his home in Saigon, dragged him out into the street arid pushed him into a small group of neighbors surrounded by armed Communists.

"The VC asked which one of us was the jet pilot," Hung said. "I didn't say anything and neither did my neighbors."

They then took the group of captured civilians and Hung down the street toward another group of VC.

A group of government soldiers spotted them and began firing on the VC.

Hung quickly pulled a small pistol he had hidden inside his pants, shot one of the Viet Cong soldiers and began running.

"They shot at me and hit me in the shoulder," he said as he unzipped his flight suit part way to show the scar. "When they hit me, I fell down, but I hurried to my feet and ran on to my house and locked the door."

He stayed in his house until the next day when government soldiers secured the area.

The next day, unknown to Hung, the Viet Cong "Liberation Radio" claimed they had captured the commander of "puppet" (South Vietnamese) jets. The following day they claimed he had rallied to the Viet Cong.

"It was beginning to look like one of the propaganda moves," Maj. Don Giroir, the senior U.S. advisor to the squadron, said. "We figured the next day they were going to issue a falsified statement saying he was sorry for his hostilities against the VC, etc."

When one walks into Hung's office in the 522nd headquarters building there is a certain air, an air similar to what you find when you walk in on a group of U.S. jet jockeys.

And just like in American squadrons, it seems everyone has a nickname. There is: Capt. Dam Thuong "Tall Man" Vu, a veteran pilot who has been shot down twice by the Viet Cong while flying Skyraiders.

Capt. Pham Quang "Sihanouk" Diem. a 30-year-old father of two and a veteran of more than 250 hours in the F5. Diem got his nickname because of his close resemblance to Cambodia's prince and chief-of-state.

Even the advisors have nicknames. Giroir is called "Yul Brynner" by the Vietnamese pilots. He got the name because of his bald dome. Maj. John Potter the other advisor in the squadron is sometimes affectionately called "Yogi Bear."

Like jet pilots everywhere the Vietnamese put on an air of care-free, happy-go-lucky playboys, but once in the cockpit of a jet they are all business.

Potter gave an example of their dedication.

"During the Tet offensive we had to hit a target in Saigon. As we were lining up to begin our runs, one of the men came on the radio and said. 'Please be careful, my family lives on the other side of the street.'

"We went on with the mission and no one held back. That takes a lot of guts, knowing that you are endangering your family or a friend's family if anyone makes a mistake," Potter said

Giroir points with pride to the record book of the "Falcons."

Giroir, who has also trained F5 pilots in Greece and Turkey, says Vietnamese pilots are among the best in the world.

In fact they have gotten so good, they often end up winning the "Coke bets" they make with their American advisors on who will do best on a mission.

Before the pilots in the squadron were trained for the F5s, they had already distinguished themselves as fighter pilots in the Skyraider, which is the main fighter plane in the Vietnamese Air Force.

Of the original group of 32 men selected for training in the U.S. in 1966, only one failed to earn his jet wings.

The average time in the Air Force for each man in the squadron is 5½ years. The average flying time for the pilots is more than 1,300 hours. All have over 20 hours in the supersonic F5.

As far as combat experience, the Vietnamese fighter pilots have about the highest percentage in the world.