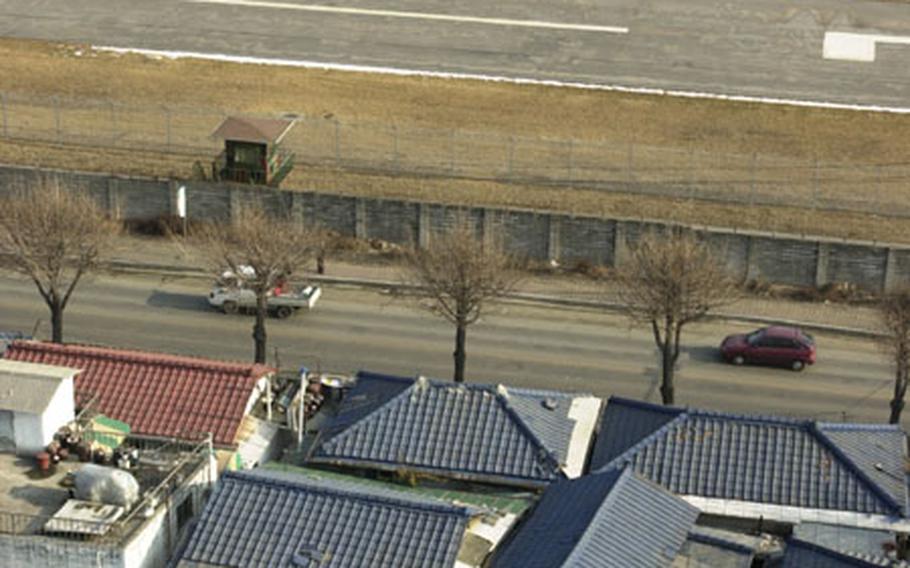 An AH-64D Apache Longbow runs inside the confines of Camp Casey, South Korea, which is surrounded by the city of Chuncheon. Homes and apartment buildings have been built around the small camp over the years. (Greg L. Davis / S&S)

An AH-64D Apache Longbow runs inside the confines of Camp Casey, South Korea, which is surrounded by the city of Chuncheon. Homes and apartment buildings have been built around the small camp over the years. (Greg L. Davis / S&S) 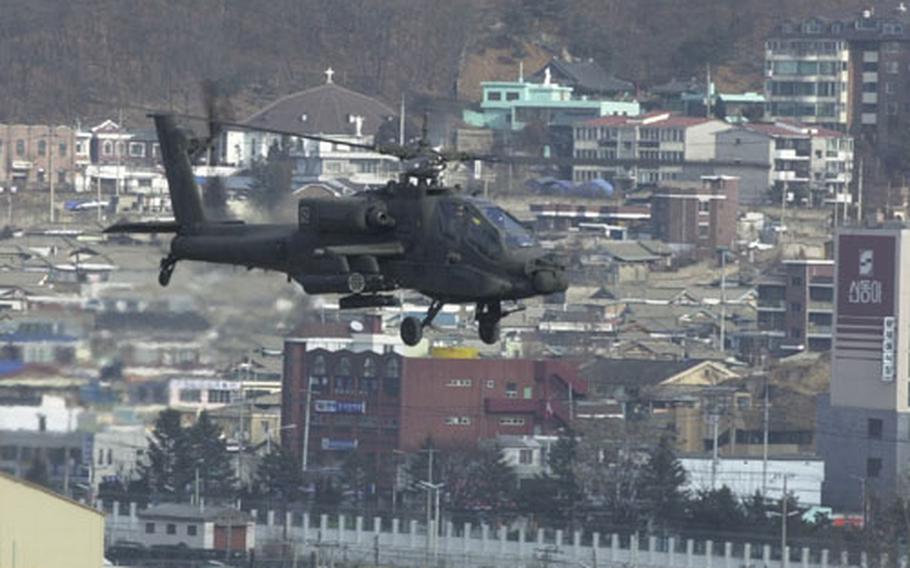 The city of Chuncheon surrounds the camp, home to both AH-64s and UH-60s Blackhawk helicopters. (Greg L. Davis / S&S)

SEOUL &#8212; A Chunchon city councilman is filing a class-action lawsuit against the South Korean government on behalf of 30 city residents, complaining about helicopter noise from a U.S. Army base.

Kang said residents have complained for more than 40 years to city officials. Now, he said, they want compensation. He&#8217;s seeking 10 million won, or about $8,500, for each resident in the claim. Kang became involved with the situation in 1998 when he joined a committee working to solve base-related problems.

Kang told Stars and Stripes that citizens&#8217; complaints weren&#8217;t good enough: The committee needed quantifiable data they could use to support a case.

All residents filled out questionnaires on their health. Hearing tests were given to 29 Kunhwa-dong residents and 24 from Hyoja-dong.

According to a report by the physicians group, the questionnaire results showed Kunhwa residents suffered more stress than those living in Hyoja-dong.

The results also disclosed that 20.5 percent of the Kunhwa-dong residents said they suffered some sort of mental disorder, while only 5.2 percent of the other group&#8217;s residents reported any mental problems.

And, the report stated, Kunhwa-dong residents also suffered more hearing problems than those from Hyoja-dong.

&#8220;The people from Kunhwa-dong had trouble hearing the higher frequencies,&#8221; she said.

The contractor measured the noise levels on Jan. 22 and Jan. 23, 2002, as base helicopters took off and landed at the base, sat running on the flight line and flew overhead.

According to a report provided by Kang, noise levels exceeded the South Korean standard of 80 decibels in one location, where the highest reading was 84.2 decibels.

Kang said many of the local residents are hesitant to join the suit now, because they are older or have financial difficulties. He said joining now would cost each person 250,000 won, about $200, in legal fees.

But, he said, if 30 people win now, many more will join future lawsuits. He said he thinks all of Chunchon&#8217;s 250,000 residents have been affected by the noise in some way.

Chang Yon-shil, who joined the lawsuit, said explaining how much she suffered from the noise is difficult.

She said the noise prevents her from talking on the phone or watching television and the vibrations damaged her roof and broke some jars.

Under a base consolidation plan, Camp Page is scheduled to move in 2011.