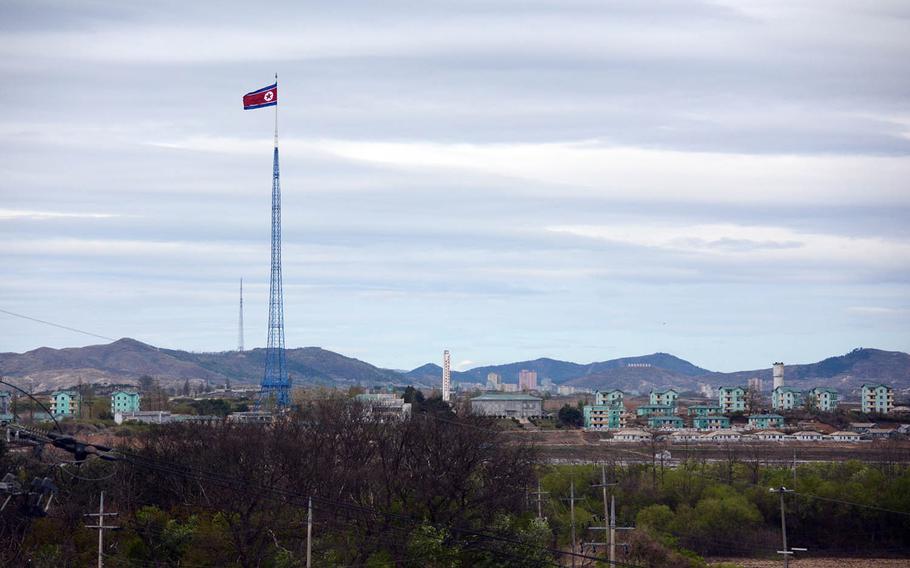 Buy Photo
A 525-foot North Korean flag hovers over an area dubbed Propaganda Village, Tuesday, April 24, 2018. The village is less than a mile from the South Korean hamlet of Taesong-dong, which the military calls Freedom Village. (Kim Gamel/Stars and Stripes)

Buy Photo
A 525-foot North Korean flag hovers over an area dubbed Propaganda Village, Tuesday, April 24, 2018. The village is less than a mile from the South Korean hamlet of Taesong-dong, which the military calls Freedom Village. (Kim Gamel/Stars and Stripes) 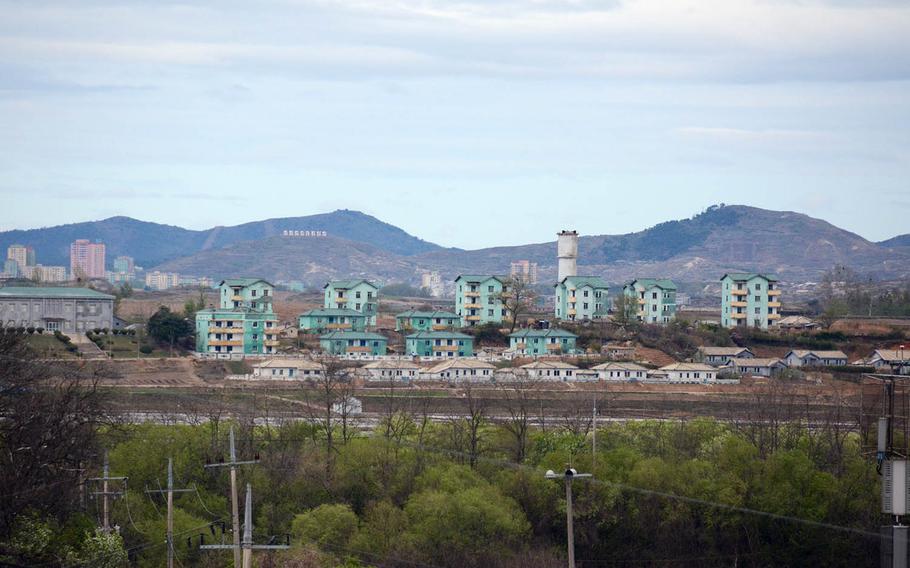 Buy Photo
A view of buildings Tuesday, April 24, 2018, in the North Korea village of Kijong-dong, which the military has dubbed Propaganda Village because it is believed to be largely vacant and meant just for show. (Kim Gamel/Stars and Stripes) 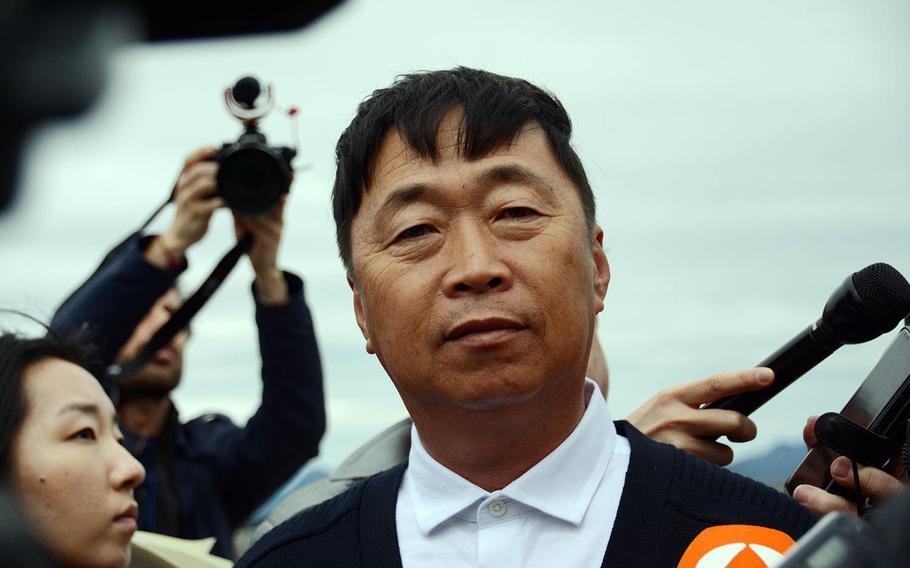 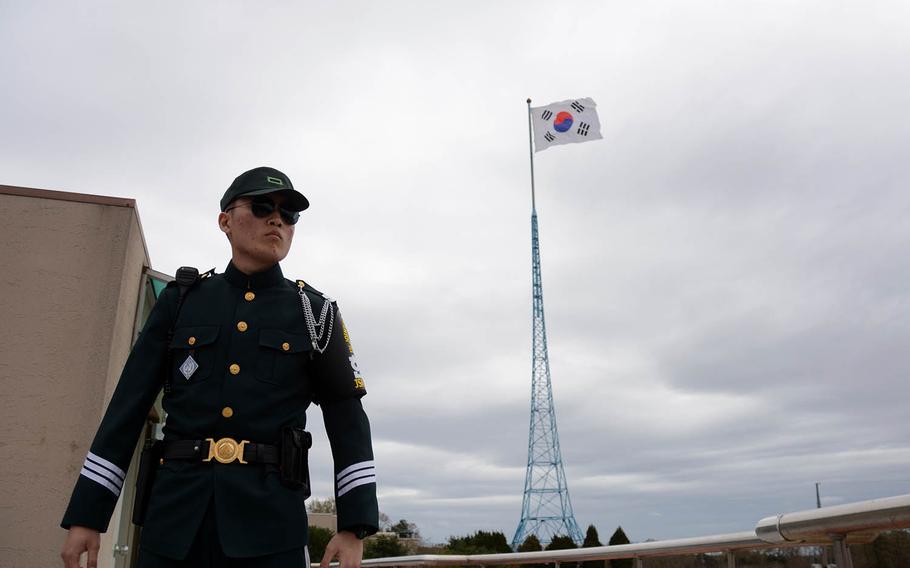 Buy Photo
A member of the United Nations Command security force stands guard with the South Korean flag flying behind him in the village of Taesong-dong, Tuesday, April 24, 2018. It is the only place where civilians live in the Demilitarized Zone. (Kim Gamel/Stars and Stripes) 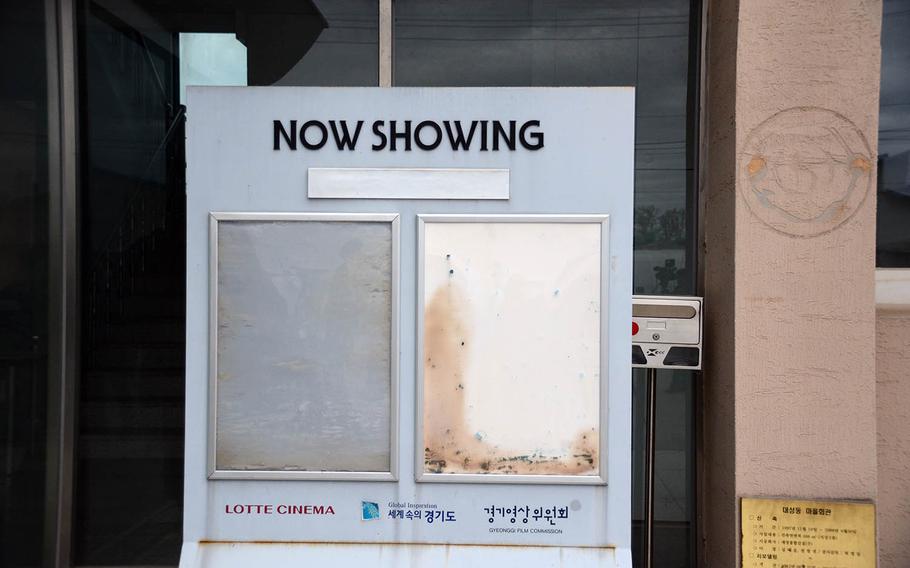 Buy Photo
The exterior of the town hall, which once housed a cinema in the South Korean village of Taesong-dong, is seen on Tuesday, April 24, 2018. (Kim Gamel/Stars and Stripes) 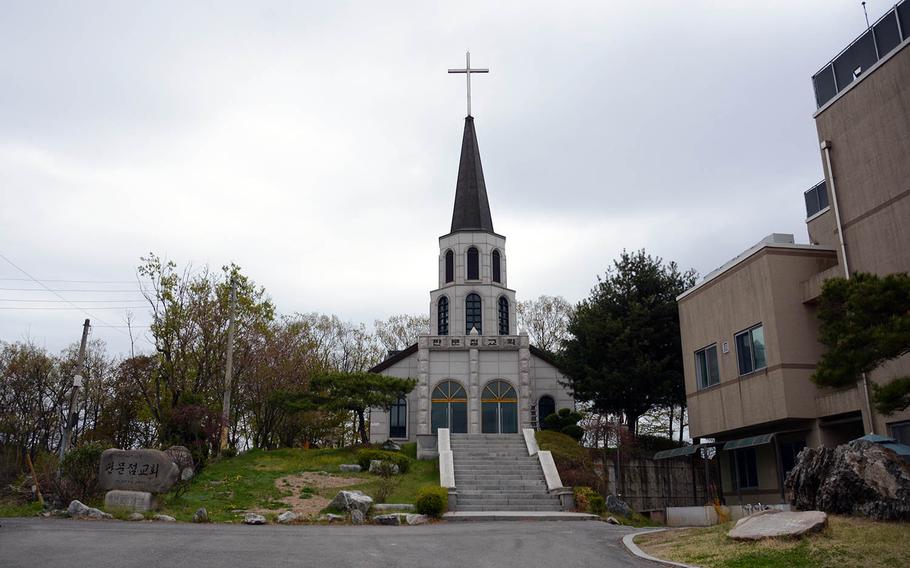 Buy Photo
A church in the South Korean farming hamlet of Taesong-dong, which the military calls Freedom Village, is seen on Tuesday, April 24, 2018. (Kim Gamel/Stars and Stripes) 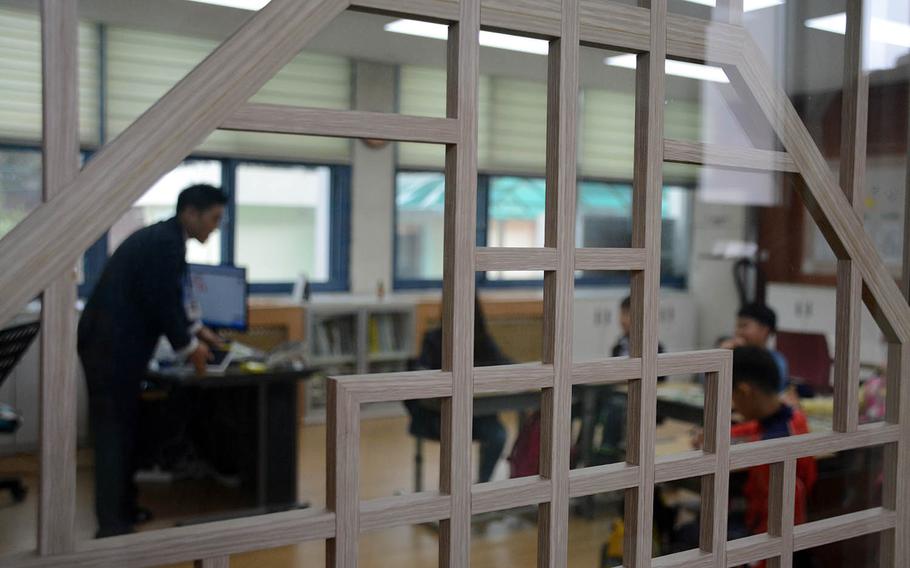 Buy Photo
South Korean children listen to their teacher during a class at the elementary school in the farming hamlet of Taesong-dong, Tuesday, April 24, 2018. (Kim Gamel/Stars and Stripes) 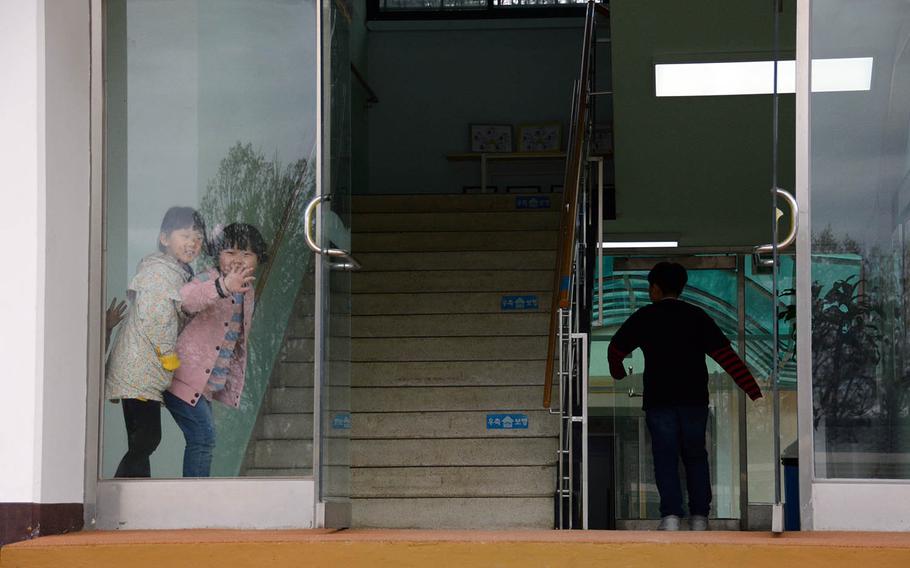 Buy Photo
Children play in a doorway at the elementary school in the South Korean farming hamlet of Taesong-dong, which the military calls Freedom Village, Tuesday, April 24, 2018. (Kim Gamel/Stars and Stripes)

TAESONG-DONG, South Korea — The diplomatic whirlwind leading to planned summits between North Korea and its adversaries in the South and the United States has already paid dividends in this farming hamlet.

Villagers can finally get a good night’s sleep.

Taesong-dong, or “Freedom Village” as the military calls it, is the only place where civilians live inside the Demilitarized Zone, the 2.5-mile wide, 154-mile long border region that’s otherwise a no man’s land dotted with land mines and barbed wire.

It’s also ground zero for the propaganda wars between the rival nations, which have been locked in a cycle of tensions since their 1950-53 conflict ended in an armistice instead of a peace treaty.

The North Korean village of Kijong-dong, which sits less than a mile away on the other side with a 525-foot flag towering overhead, has been dubbed “Propaganda Village” because it’s believed to be largely vacant and just for show.

It also has blasted anthems and patriotic songs around the clock for years, providing a constant headache for the some 200 South Koreans on the other side.

Mayor Kim Dongku said the noise finally stopped Monday as both Koreas apparently halted the propaganda broadcasts in a goodwill gesture ahead of Friday’s summit between their leaders.

“They haven’t been broadcasting since yesterday so it’s good now, it’s quiet now,” he told reporters visiting the village Tuesday. “Before that it was so loud. It really bothered people.”

South Korea also stopped sending anti-Pyongyang messages and K-pop songs from loudspeakers across the border Monday. The move was aimed at easing military tensions and establishing an environment for peaceful talks, according to the Defense Ministry.

The broadcasts have long been used as a pawn in negotiations between the two sides amid rising tensions over North Korea’s nuclear weapons program.

Taesong-dong’s residents enjoy many benefits for living so close to the North. They don’t have to pay taxes and the men don’t have to perform mandatory military service. They enjoy some of the best farmland in the country for rice paddies, red peppers, ginseng and other crops.

Children have access to a competitive kindergarten and elementary school, which have just under 40 pupils to share 10 teachers and administrators. Many U.S. troops and other international volunteers assigned to the U.N. Security Battalion that guard the DMZ also teach English classes at the school.

Residency, meanwhile, is strictly limited to descendants of the original inhabitants or to women who marry men who live there. Men are not allowed to marry into the community because the government doesn’t want them to exploit the military service exemption, officials said.

Residents can come and go, but they have a midnight-to-dawn curfew and must be present in the village for at least eight months of the year.

Despite the benefits, the aging population has declined in recent years, forcing the school to bus in students from nearby areas. Only eight of the current students are from the village, according to principal Jin Young Jin, who himself lives in nearby Paju.

Kim Dongku said villagers have keenly felt the rising tensions that many feared were pushing the peninsula to the brink of a new war last year. But their spirits have been lifted as diplomatic efforts to persuade the North to give up its nuclear weapons have gained momentum.

“All residents are floating on air and looking forward to the summit,” he said. “I feel a mood for peace seems to have been created. Residents just want to live here in stability. I have high expectations.”