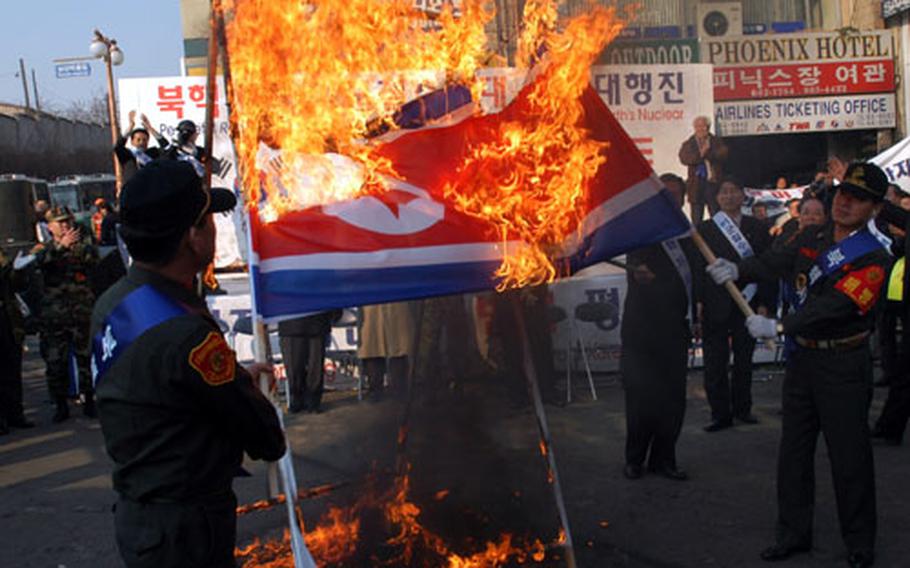 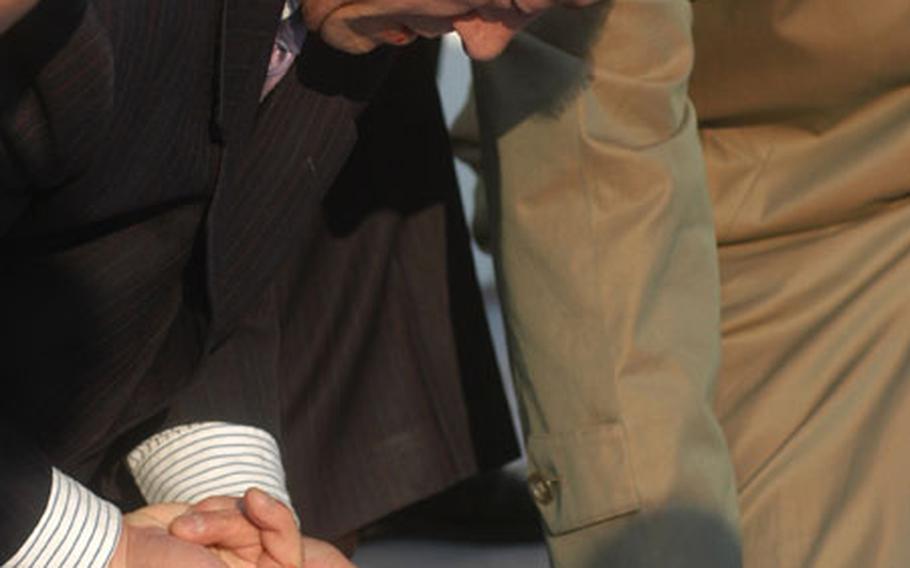 Chong Jin-mo squeezes blood out of his finger to write a message supporting U.S. Forces Korea during a rally outside Osan Air Base, South Korea, Wednesday. (T.D. Flack / S&S)

OSAN AIR BASE, South Korea &#8212; More than 400 South Koreans gathered outside this American air base Wednesday to support the U.S. military and call for an end to North Korea&#8217;s nuclear-arms development.

The rally was an oddity following a month with tens of thousands of anti-American protesters filling the capital&#8217;s streets demanding the withdrawal of U.S. troops and a revision of the legal guidelines governing servicemembers in South Korea&#8217;s legal system.

The catalyst was the acquittal of two U.S. soldiers who were manning an Armored Vehicle Launched Mine Clearing Line Charge that crushed to death two 13-year-old South Korean girls in a June 13 convoy accident. Activists wanted the soldiers tried in the South Korean legal system, but the status of forces agreement between the countries gives U.S. officials primary jurisdiction over crimes committed by on-duty troops.

Violent protests rocked the nation&#8217;s streets when the soldiers were acquitted in late November. Critics called the trial a sham, and protest groups declared war against U.S. Forces Korea.

At Wednesday&#8217;s rally, speakers said they want their government to put an end to the &#8220;instigators who are trying to split &#8230; the alliance between the United States and Korea.&#8221;

Song Yong-in said the June accident was tragic but shouldn&#8217;t be used for political purposes.

&#8220;President Kim &#8230; insisted on the Sunshine Policy, and we had to follow it since he said it was for peaceful unification, but what happened? His policy is taking off South Koreans&#8217; coats and make us shiver with this cold,&#8221; So said.

&#8220;We are in serious danger right now. I heard that I should not attend this rally if I want to live, but I&#8217;m here to sacrifice my own life for the security and democracy of this country.

&#8220;This government knew three years ago that North Korea was developing nuclear weapons, but they still offered economic aids even after they knew of the ongoing schemes.&#8221;

The base gates remained open during the rally and U.S. troops could be seen walking in and out of the installation, a marked difference from procedure during anti-base protests.

In a written response to a Stars and Stripes query, Brig. Gen. William L. Holland, 51st Fighter Wing commander, said, &#8220;I think the pro-American demonstration finally represents the majority and not the vocal minority of the Korean people.

&#8220;They are expressing that they understand the military&#8217;s mission is to protect the security, safety and stability of all Koreans, whether they know this or not.&#8221;

Most told Stripes they agreed with what they were hearing.

Choe Sung-kyu of the Casey Lee tailor shop said most of his customers are U.S. servicemembers. He thinks the overall South Korean economy would suffer if the United States withdrew from South Korea.

Many speakers called the nation&#8217;s youth to task for the recent swell of anti-Americanism.

One man jumped on stage toward the end of the rally and told the audience he was so angry that he wanted to write a message in his own blood.

Chong Jin-mo knelt on stage and bit the end of his finger, drawing blood. While another man held a sheet of paper, Chong squeezed blood from the wound and wrote, &#8220;Oppose the withdrawal of USKF,&#8221; in smeared red Korean letters. The crowd chanted his name, and he held the paper triumphantly above his head.